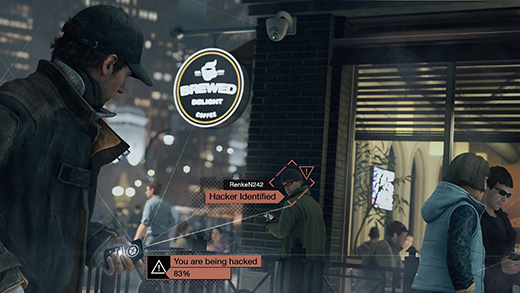 HIGH "Tailing" a target by jumping from camera to camera.

LOW The pointless sideplot with Defalt.

WTF Why did we even have that bit with Jordi in the finale?

Never let anyone use the term "Grand Theft Auto clone" as a criticism. Though I'm no great lover of the GTA series itself, some of my favorite games are its clones. What unites the great ones is that they each hold tight to a specific take on the formula. Saints Row embraces the absurdity of the core mechanics. Red Faction: Guerilla treats destruction seriously. The Saboteur deploys an opposing system that deserves all the punishment the player can deal out.

These GTA clones are superior to the formula they're aping. Watch Dogs

At some point Watch Dogs had the chops to contend. The bones of that design are still visible, like fossils half-buried in the muck of action-game tropes, and they surface in the hacking sequences Mike loved so much. They're especially obvious in how "hero" Aiden Pearce can use the environment, rather than his weapons, to overwhelm opponents. They're apparent in the stealth when manipulating phones and objects to distract observers or draw them out of the way. They're evident in the hide-in-car mechanic, an idea that embraces the possibility of evading the police by means other than outrunning them.

All of this speaks to a time when Watch Dogs re-conceived the third-person sandbox game as one in which the goal was to succeed through intelligence rather than force, and at some point there must have been a vision where Aiden triumphed by outsmarting his enemies. Of course, it's possible that design wouldn't have been entertaining, but at least it would have been an interesting one, quite unlike the product we received after those elements were forced to fit the Rockstar template.

The Watch Dogs that resulted is an incoherent mess. How else can one describe a game where firing a silenced pistol in a park brings down the wrath of the police department, while detonating a half-dozen cars with a grenade launcher summons not a one? The characteristics that make the fiction of a Rockstar game remotely workable—police apathy and incompetence, human limitations—don't fit a game built around a citywide panopticon. It should be no surprise, then, that the resulting world makes no sense.

Consider police chases. When Aiden does something that should attract the attention of law enforcement, a passerby will often call for emergency assistance. Aiden can knock that phone out of the caller's hand, but if the message goes through, the computer that watches over the city starts sweeping the area to find him. Aiden can dodge or hack these sweeps, but if caught, the cops will be summoned. A relatively standard chase will ensue, with some added flavor from Aiden's ability to turn the city against his pursuers. Bizarrely, the chase ends when he drives far enough away from the cops that are chasing him… in a city that found him through remote surveillance in the first place! The end of the chase doesn't remember the beginning. That's not just inconsistency between the world and the gameplay, that's the gameplay completely forgetting itself.

The shift towards Rockstar-ization also has consequences for the story. As a grim thirty-something white dude with short brown hair and no personality, Aiden Pearce was never going to be a memorable protagonist, but as a character with limitations, he might have been an interesting one. Granted an immense arsenal of assault rifles and sports cars plus the inexplicable ability to enter bullet time a la Max Payne or Red Dead Redemption, he becomes completely laughable, and a puerile fantasy of absurd proportions. The relegation of women to roles of damsel in distress and fridging victims completes the impression that he and his whole arc were written by a preteen. If that were literally true, it would at least excuse lines like "Everything reeks of conclusion."

That's not to say that Watch Dogs has no redeeming features. In its better moments, when it lets Aiden succeed by hacking, ducking the system, or hiding in plain sight, it can be exciting to play. The story, dumb as it is, at least feels like it's connected to the setting, and although its treatment of minorities is not exemplary, it at least acknowledges how Chicago has mistreated and abandoned them. Unlike Second Son, Aiden feels connected to Chicago, though perhaps not quite strongly enough to convince anyone that he actually lives there.

Unfortunately, what little the game gets right is drowned out by the me-too GTA-clone action that fundamentally misunderstands the problem—its weakness is that so much of it is the same old stuff we've done before. Watch Dogs

can't be more than mediocre because it takes a fascinating premise and then actively chooses to push it to the side, in favor of being the most boring thing it possibly can. Rating: 5 out of 10


Disclosures: This game was obtained via retail purchase and reviewed on a home-built Windows 7 PC equipped with an Intel i7 processor, 8 GB RAM, and a single Radeon 6800 HD-series graphics card. Approximately 40 hours of play was devoted to single-player modes and the game was completed.

Parents: According to the ESRB, this game contains blood, intense violence, nudity, strong language, strong sexual content, and use of drugs and alcohol. Basically do not let your kids near this until they are old enough to drive. Maybe not even then.

Deaf & Hard of Hearing: Subtitles are available for all important dialogue. There are sound cues that can be very helpful in some of the stealth and vehicle chase situations. Everything has a visual counterpart but they can be difficult to see unless you know (from the sound) to look for them.

Thanks. But I wonder why the score is hidden. xD

Anyway, this game sold 8 million goddamn copies. So much for all the demands that everything morally wrong about the game be different.

Scores can be seen by highlighting the text just after the last paragraph of the review.

This is a little weird, but where is the score put in GameCritics reviews? I’ve searched everywhere but I can’t find a score anywhere. And this site is listed on Metacritic, so I know it gives scores in irs reviews…

[quote=Orangetack]Thanks. But I wonder why the score is hidden. xD [/quote] Game review scores have long been a contentious issue in the games industry and this site. Think of it as an easter egg. 😉

Any idea which version I should get to have the best performance for Watch Dogs?

I wonder what your insight is on this but it reminds me of Assassin’s Creed when I first played it. The game was promoted as being a game where you have to assassinate certain people by finding a way in, using stealth and outsmarting your opponents. After you did the assassination you would have to flee the autority in a similar outsmarting fashion. But then I played the game and I tried the above approach. It was tiring and frustrating. By the end of the game I realised that it was much easier to just go straight up to the… Read more »

I think the thing that hurt Assassin’s Creed for you was that the assassinations were always supposed to be these big, important set-piece events, which is essentially the antithesis of the game you wanted. This, though, seemed to have been part of the original design intention, especially in the original game. The way assassinations played out in that game was meant to, I think, produce a stealth-lite initial phase followed by a speed-based free-running escape. Unfortunately they never resolved a way to make those escapes give you enough time to pick out a smart route, and the imprecision of the… Read more »

Black Flag is a pretty good pirate game, stealth is more robust than most of the previous games, and the free-running you’re asked to do is fairly limited. However, it still has most of the same control problems that have afflicted the series since the beginning. I felt on balance that Black Flag had more than enough positives to outweigh those negatives.

As for Watch Dogs, it controls well enough but there’s very little climbing about. I had more trouble from the PC’s framerate problems than the controls themselves.

Yes exactly. So after two games I gave up the series. Although I’m very tempted to give Black Flag a try because I really like the Pirate theme.

Do you know if the controls have gotten better in Black Flag or on next-gen?
And does Watch Dogs have the same issue?

In these cases about morals I think it’s mostly just a small group that cries very loudly on internet forums and such. I don’t think the general audience cares much.

My point precisely. A significant portion of the gaming press, including this niche site (which I am a big fan of, don’t get me wrong), expressed disappointment over stereotypes based on race and lack of characters based on gender. These criticisms mirror those made of the industry as a whole. So what I would ask those that make those criticisms, when confronted with the fact that Watch Dogs sold 8 million copies, how does that fit into your advocacy? Does it strengthen your resolve? Does it make you want to give up? I’m honestly curious. Whether or not the poor… Read more »