Crates for the Crate Throne! 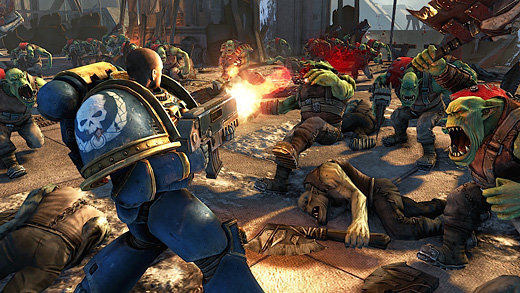 HIGH Charging across a bridge to take on the forces of Chaos with a squad of marines at my back.

LOW The disappointing final boss is a wave fight in a boring arena followed by a quick-time event.

WTF All these slow-moving platform elevators and no ambushes on them?

The Warhammer 40,000 universe created by Games Workshop fuses Herbertian science fiction with fantasy themes from Tolkien and Michael Moorcock. Given these diverse influences, it's perhaps no surprise that the setting is absolutely bonkers, with humanity vying against semi-fungal spore-shedding orks, angry gods of Chaos, magic space elves, and a robot death cult that seeks to feed all the galaxy's life to malevolent star-swallowing monsters. Warhammer 40,000: Space Marine

attempts to put the player in this universe as the impossibly burly Ultramarine Titus, sent with only a few allies to do battle with an enormous army of alien orks. The result, unfortunately, is rather uneven.

Titus and his team go into action to protect the interests of their mostly-dead God-Emperor on the world of Graia. The planet consists entirely of blasted desert and endless factories, which apparently make crates in prodigious number and variety, so as to allow the least inspired level design possible. While the gothic architecture and widespread destruction add a little spice to the landscape, there's no escaping the fact that Space Marine looks like every boring game setting I've ever hated. No matter how lavishly each area is decorated with skull motifs, the game feels like a prison from start to finish.

This reflects a broader problem in that the game struggles to convey the depth of the setting. While the brutal futility of the galaxy's endless war comes through nicely, subtler and more interesting aspects of the Warhammer 40k universe mostly exist as words in background dialogue. That's enough, perhaps, to tantalize Games Workshop fans, but not enough to really differentiate this world from the slew of knock-offs most gamers have already played. 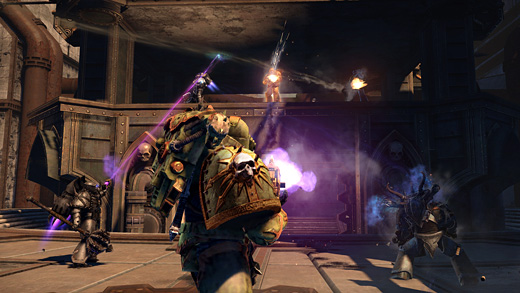 Despite that, Space Marine provides some entertaining combat, particularly in its early chapters. The hardy orks come in waves that are too large to be thinned out effectively at range, making close, bloody combat inevitable. Under normal conditions, Titus has a shield that regenerates and health that does not, but he can revitalize himself by brutally executing his enemies. Wounding and killing his foes also powers up Titus for a special attack mode where he does extra damage and heals continuously. These mechanisms push the player to wade aggressively into close-quarters combat.

Unfortunately this characterization falls apart in the later levels of the game, as ranged foes become more the norm. Their attacks can eviscerate Titus' shields before he can close in, making effective melee assaults a trickier proposition. As a result, the later chapters tend to encourage conservative gunplay, and Titus spends entirely too much time cowering behind the nearest gigantic crate waiting for his shield to regenerate. Space Marine tries to compensate by powering up that shield, but except for a stirring massed assault across a bridge, the last third of the game loses the short-range violence that made its first chapters so memorable.

Given that the whole single-player game consists of wading into fights against waves of enemies, usually with allies at your side, one might expect to see a co-op "Horde" mode in multiplayer. Curiously, this has been left out, and the multiplayer has only team deathmatch and domination modes on offer. These are decent enough, though the domination matches tend to get disorganized (a minimap or some nonverbal way to convey orders would have helped). Given Space Marine's roots in a tabletop wargame, a deep, tactical multiplayer experience would have been fitting; what's offered here is bland and lackluster despite the extensive character customization options.

As has become typical, the multiplayer component gains persistence by way of a mostly broken experience / challenge system. The problem here is that the two multiplayer modes give up experience very asymmetrically, such that standing around for a few seconds at the start of the round in domination gives you as much experience as 4 kills in deathmatch. Relic would have been better off ditching the experience model, but this essentially dissociated system has a "corporate office" feel to it, so maybe they didn't have a choice.

manages to turn its setting to good use, and Games Workshop fans will certainly relish the chance to grab a chainsword and strike a blow for the Emperor. As it progresses, though, the game loses its brutal, inspired nature and becomes too much of a shooter despite its lack of a cover system. The graybrown futility of its crate-based levels offers nothing to sustain interest as the game rumbles towards its predictable downer of an ending. At times, especially early on, Space Marine can be visceral and exciting, but it never feels as unique or fascinating as the universe that spawned it. Rating: 6.5 out of 10.


Disclosures: This game was obtained via retail store and reviewed on the Xbox 360. Approximately 9 hours of play was devoted to single-player modes (completed once) and 4 hours of play in multiplayer modes.

Parents: According to the ESRB, this game contains blood and gore, and intense violence. This is certainly true, and the M rating was probably unavoidable. I feel a sensible teenager should be able to handle this game, however.

Deaf & Hard of Hearing: Subtitles are available for any dialogue of note, and there are no essential audio cues.