Turn Down the Dialogue 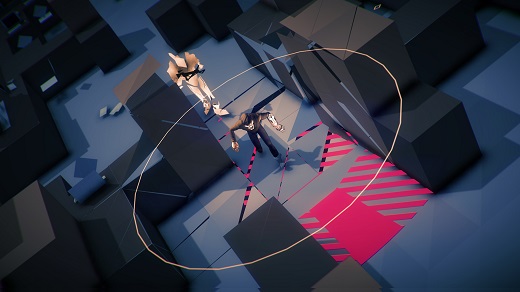 HIGH "A Scarlet Chamber", a level that allows the player great flexibility in solving its problems.

LOW Any blackjack-intensive level but especially "The Heart".

WTF A live web stream inspires a crime spree and a revolution within the space of two hours?

It seems redundant to state that Mike Bithell's aesthetic is minimalism. After all, this is a man who came to prominence by making a compelling platformer about sentient rectangles, each of which could only do one thing. It's fitting, given its name, that Volume adds a third dimension, along with many more polygons and a change of genre. Though more elaborate than its predecessor, Volume retains Bithell's hallmark style, not only in its graphics but also in its stripped-down approach to stealth.

Volume's most immediately evident strain of minimalism is the scope of its levels. The game's premise is that its protagonist, Locksley, is simulating spaces using a projector with a maximum reach of 31 by 31 meters. Accordingly, there are no long, sumptuous levels. Instead Volume supplies tight, often coiled spaces that can generally be solved in less than four minutes. To offset any disappointment that may result, it has 100 of them (and more coming via user-made levels).

Although detection lasers and electrified floor panels put in a few appearances, the primary danger to Locksley in each level is its array of robots. Volume has a small number of enemy types, most of which have obvious differences in the range and scope of their vision and their offensive capabilities. The game also follows the old habit of Metal Gear by giving its enemies clearly-delineated sight cones and also visually depicts the reach of sound, as in more recent games like Mark of the Ninja. This means that every relevant variable is explicitly displayed on the screen, and the spare, blocky visuals makes the displayed information easy to process.

Only one or two main levels posed any serious challenge, in part because Volume allows the player to cheese out of trouble quite easily. Checkpoints are frequent, and Locksley can often make it to one before he gets killed by a pursuer. If so, he's home free because enemies will reset completely if he dies, although a recent patch allows players to alter this behavior if they wish. Similarly, reaching a level exit with an enemy in hot pursuit has no penalty. Partly as a consequence, Volume feels like a game where planning the right course of action is more important than actually executing it.

This planning is facilitated by the fact that Volume limits the player's options at any given moment. Locksley has two motion modes, either a free-moving creep or a slow, wall-plastered sidling that prevents him from being seen behind low objects. He can have two tools. One of them is whistling, and the second varies depending on what's available in the level, encompassing methods for distracting or incapacitating guards, or making Locksley himself more difficult to detect or catch.

These limits mean that many of Volume's challenges boil down to figuring out what to do with the second tool Locksley has at that moment. That's enough to keep the game interesting, if a bit shallow, but Volume really sings when it gives Locksley access to several tools and lets the player figure out what to use and when.

I also preferred levels with multiple tools because not all of them worked equally well. I disliked the "figment"—a mobile decoy—as it had fiddly and unpredictable effects on the enemies that tried to pursue it. The worst of the tools, however, was the blackjack. It's essentially a stun gun, which had snap-based aiming I constantly had to fight. Using it tended to transform the game's central action from conception to reflex, and as a weapon, the blackjack seemed at odds with Locksley's ethos… Or perhaps it isn't?

Volume's story is a guffed-up version of Robin Hood that's too abstracted for its own good, so it's a little difficult to tell. The confusing premise is that Robert Locksley, a child of privilege in a near-future dystopian plutocratic England run by Guy Gisborne, has stolen a volumetric projection simulator (or "volume") run by an AI named Alan. Using this system, he simulates the security layouts of important targets, streaming his stealthy incursions so that the people of England learn how to steal the country's wealth back from their oppressors.

The videogame-within-a-videogame conceit seems every bit as Metal Gear as the gameplay, and the story's Kojima-esque logic is also all over the place, particularly when it comes to the timeline.

Volume posits that a mass social movement will begin and then flourish within two hours. Or so. This seems to be an effort to serve up an epic confrontation, but the jumbled setup tends to obscure the stakes of any given mission, and the characters aren't strong enough to sell the narrative. Volume's story snippets neglect them in favor of describing events, and all the interesting ones happen at a great remove in time and space from the player's actions. Andy Serkis and Danny Wallace create personality with inflection, but Locksley himself is played by a lesser actor and ends up being limp and uncharismatic.

It's odd to run up against a stealth game where the leaderboards are significantly more compelling than the scripted story, but that's Volume in a nutshell. Its stripped-down aesthetic parallels the tight constraints of its levels and the careful curtailing of player power, verging on making some parts feel shallow. Its larger problem is that this minimalism contrasts jarringly with a dense, bombastic, and imperfectly-executed narrative. The stealth is quick, clean, and quiet, but Volume's story is heavy and loud. Rating: 7.5 out of 10


Disclosures: This game was obtained via retail purchase and reviewed on a home-built Windows 7 PC equipped with an Intel i7 processor, 8 GB RAM, and a single Radeon R9 270X graphics card. Approximately 10 hours of play was devoted to single-player modes and the game was completed within 8. Some individuals who worked on this game receive or have received individual support from me through crowdfunding or patronage.

Parents: According to the ESRB, this game contains fantasy violence, suggestive themes, and mild language. I don't think there's really anything worth objecting to in Volume. Even within the context of the fiction no actual violence is ever occurring during play, and there's nothing salacious depicted. The rating is overestimated in my view. Volume contains no notable characters that are female or people of color.

Deaf & Hard of Hearing: All dialogue is subtitled or appears in a text box, and every relevant sound Locksley makes is depicted visually.