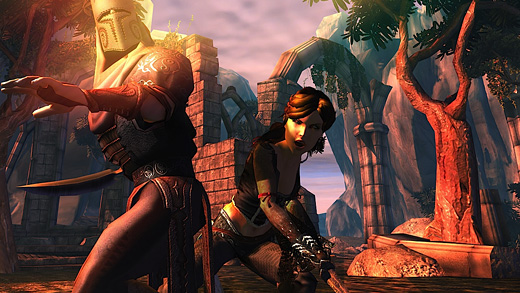 HIGH Dying from a coordinated attack by three weakened enemies, then resurrecting in just the right spot to slaughter them all within a few seconds.

LOW Fighting the final battle with the camera whipping around like crazy.

WTF Couldn't this place have looked more like Venice?

is the sort of game that ought to make a potential buyer feel pretty skeptical. As a modestly-priced RPG from a small developer that hasn't made such games before, one might reasonably expect a bug-ridden, barely playable mess. In that respect, as in many others, Venetica would disappoint. Although it has its share of rough spots, it isn't technical problems that bring Venetica down. Rather, the game falters because a series of poor decisions in art and design make it unwieldy and dull.

Venetica introduces its heroine Scarlett shortly before assassins attack her home town and kill her one true love. Soon, she learns that she is the daughter of Death himself, capable of wielding an otherworldly blade against undead and demonic creatures, as well as resurrecting herself should she fall in combat. With her newfound powers, she heads off to confront an evil necromancer in the city of Venice.

This sounds promising, but Venetica isn't actually set in Venice. Rather, it inhabits a fantasy transformation of the city where the Doge lives in a gleaming palace, miles above the water, atop a mountain of hovels. Now, verisimilitude is mostly overrated, and I honestly prefer Venetica's bright palette to the graybrown mess that the Assassin's Creed cityscapes can occasionally descend into. The issue here is that the character of the real city, and its evocative sights, have been replaced by generic fantasy junk. Nothing in the invented landscape rivals, much less exceeds, the Bridge of Sighs or the real Doge's Palace. Venetica has Venice in name only, and its vistas are much less interesting to observe and explore than the real thing.

This is not to imply that Venetica has much in the way of vistas. Although the city looks huge on the game's occasionally wonky map, only a tiny fraction of it is ever explored. As a consequence, the game feels cramped and tiny except in a few spots. Even the "open" areas often amount to nothing more than narrow corridors with doors on either side.

Despite this, Venetica has graphical problems on the Xbox. The art is decent, and some of the lighting effects are well done. However, some of the textures are jarringly low-resolution (especially high up in the Arsenal), and when an area does open up, the draw distance is too ambitious, resulting in a positively savage, headache-inducing framerate. The camera doesn't help things, moving too quickly and often unexpectedly.

This speaks to a port that's poorly designed for consoles in general, and the Xbox specifically. Magic spells and weapons skills are mostly relegated to a four-slot context menu tied to the notoriously inaccurate Xbox D-pad. This puts movement and skills on the same thumb, a poor choice for an action-RPG combat system that has a tactical emphasis on positioning. Success in Venetica's combat strongly depends on getting Scarlett out from in front of her enemy, requiring constant motion that makes using the skills inconvenient. 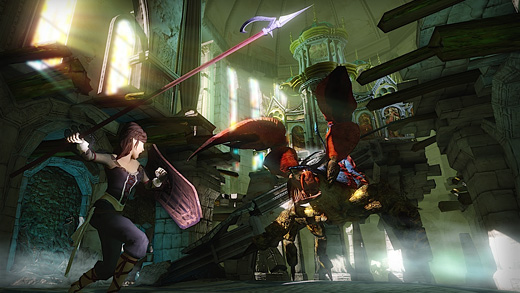 The skill slots shift with each of the four weapons, presumably allowing 16 skills or spells to be available. However, because each weapon has a unique blocking skill, and spells and skills are on the same menu, the actual slots available for experimenting are rather few, a problem exacerbated by the fact that spells cannot be cast from the menu, even though items from the inventory can be used in this way. Meanwhile, the Y button is relegated to the rare task of calling up the map. The game simply doesn't make use of the controller's strengths or account for its weaknesses.

One could justly brush all of this aside as a minor inconvenience if Venetica offered any compensation in terms of story or meaning, but regrettably that doesn't happen. Scarlett is reasonably well-handled for a female game lead, but she isn't much of a character. Presumably, she's left ambiguous so that the player can make natural-feeling decisions for her. This adherence to western RPG convention, however, felt out of place in Venetica. In part this is because Scarlett's decisions rarely seemed to have any real consequence, amounting to little more than changing two seconds of a cut-scene and selecting a particular chain of side-quests.

This becomes a serious problem because it prevents any elaboration of the romantic story at the game's emotional core. Scarlett's relationship with her fiance supposedly motivates her adventure, but it lies entirely in the past. We never get a feel for what attracted her to this man or why she remains so devoted to him. The rubber-faced character models and low-rent voice acting can't save this story on their own. Given these weaknesses, and the fact that the WRPG aspects amount to little more than irrelevant "choiciness", Venetica would have been better off hewing to the JRPG story approach. At least in that case the writing could have been put to work creating an emotional arc for the narrative.

This is not to say that the writing was a particular strength. The plot is standard, and the dialogue is larded up with irrelevant explanations that add little flavor to the game's generic world. While Venetica has only a few moments of tooth-grinding stupidity, the story never really reaches any high points that balance them out. Occasionally an interesting character or idea does appear, but these never receive any further attention.

This is the real disappointment of this game: Venetica never uses what it has. Just as the potential of Venice as a setting is squandered by transforming the city into generic fantasy pap, every interesting aspect of the game simply goes nowhere. What's left behind is a perfectly playable action RPG that, aside from a modestly interesting take on player death, has very little to recommend it. Venetica has a few good ideas and a couple of characters that deserve further examination, but it just doesn't seem to be at all interested in them. That, I suppose, is why I wasn't all that interested by Venetica


Disclosures: This game was obtained via retail purchase and reviewed on the Xbox 360. Approximately 20 hours of play was devoted to single-player modes (completed once).

Parents: According to the ESRB, this game contains alcohol reference, mild blood, mild suggestive themes, violence. Combat is essentially bloodless, and despite the subject of necromancy nothing about the game is particularly creepy or disturbing. Scarlett and one other character have outfits that are a bit more revealing than is sensible, but generally the women in the game are treated as characters rather than sex objects.

Deaf & Hard of Hearing: All dialogue, including ambient conversations, is subtitled. Audio cues sometimes signal when an enemy is about to attack, but these are an unreliable aid at best, so hard-of-hearing players will not be at a serious disadvantage.