Actually, DO Go in There 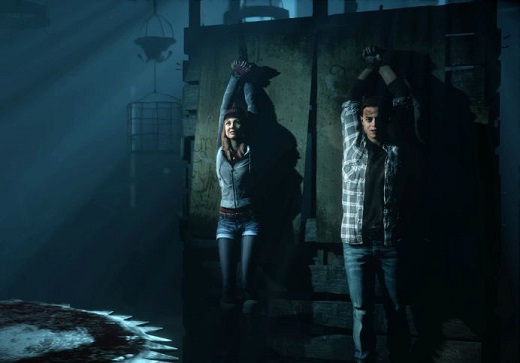 LOW Having a character die to the not-great combat QTEs.

Teen slasher horror game Until Dawn sets out to do two things.

The first is that it wants to create a compelling and propulsive interactive movie. It also tries to be an adventure where the player makes interesting choices that have meaningful results. Supermassive Games, previously notable for such titles as Walking With Dinosaurs and the Vita port of LittleBigPlanet, did not seem likely to meet these challenges. To my surprise, they succeeded at both.

Attempts to fuse games with cinema generally end up being lousy games because controllers suck at representing the array of actions humans have in a real setting. So, we get QTEs, and Until Dawn is full of them. Unfortunately, not all of them turn out great—I had an unhappy experience with the combat QTEs because I prefer to invert Y for aiming. On the other hand, Supermassive makes great use of the Dualshock 4's technical capabilities.

The touchpad on the Dualshock is employed for physical things like turning pages or flicking lighters (Apparently Until Dawn takes place in a world where non-smoking teens carry nice metal lighters). Even better, the game uses the controller's internal motion sensors in tense situations to force the player to hold still along with the characters on screen. This allows the body and eyes to collaborate in building tension. It's not earth-shattering stuff, but it works well and helps keep the player actively engaged.

Another problem with games that try to be cinema is that they end up being lousy movies. Game developers seem to have learned nothing from a century of cinematography—it's no surprise given that hardly any of them have learned from eight millennia of storytelling, either. Nonetheless, Until Dawn manages to be a cut above other interactive movie efforts. The game uses its color palette wisely, character bodies are convincingly mo-capped (their faces somewhat less so) and the voice acting is (mostly) of very high quality. More surprisingly, almost the whole thing works well as film, with intelligent cuts and even a few noticeably well-framed shots.

What about the storytelling, though? In his review, Dan complains that it doesn't entirely make sense, and he's right. In fact, if the game's backstory is taken seriously, the narrative of Until Dawn, the events of its past, and even the existence of many buildings seems nonsensical. However, a story that stands up to careful scrutiny just isn't something I expect from the teen slasher genre.

The real test of this kind of story is whether it keeps the player caught up in the moment, not whether it falls apart later while she's thinking about it in front of the fridge. Until Dawn meets this challenge beautifully, so it doesn't matter that the game can't get straight on whether or not the power works in the lodge, that the actions of the antagonists don't really make sense, or that it should be impossible to get that many barrels of kerosene up to such an inaccessible place. No, the elements that break narrative flow are the real problem, and Until Dawn shoots itself in the foot in two ways.

First, nearly every chapter starts off with an unskippable "Previously on…" montage. That's not all bad—I found it pretty useful when I left the game for a day or two and came back. In a binge play, however, these segments waste time and break up the narrative momentum.

A more serious problem are the regular interludes with a psychotherapist. On the plus side, these scenes feature Peter Stormare hamming it up, which is always a pleasure. However, they constantly kick the player out of the narrative flow and serve little purpose. Even when Until Dawn tries to explain what's actually going on in these interludes, they don't make much sense in the context of the story and have a negative effect on the plot overall.

Putting those issues aside, I felt that the game carried me along wonderfully. However, in his review Dan thought the game (as a narrative experience) fell apart on replay, and I think this is sort of true, especially for players who boot it right back up after finishing. By the end of the second playthrough, it becomes clear that certain characters will be forced to stay in the story almost up to the very end, and others will be neglected even if they are saved.

After this discovery, I found that Until Dawn transitioned pretty seamlessly from "story" to "toy". It's true that the player's capacity to get characters killed early on is quite limited, and like all entries in the contemporary genre of "important decision" adventures, the significance of most choices is oversold. The player doesn't have complete control—she can't choose who will be the hero, and many scenes play out more or less the same no matter what the player does.

Nonetheless, the player has a lot of input into who lives and dies, and Until Dawn generally has some onscreen reaction to most of the player's decisions. The results can be as minor as a previously unseen character coming into the frame if certain QTEs are missed, or as significant as showing character-defining conversations that only unfold in response to dialogue from a specific angle. Beyond the first two playthroughs, I enjoyed tinkering with this system and seeing what I could find hiding in its corners.

Should I fault Until Dawn for aiming low, and for not being a particularly interesting story even in the context of slasher flicks? Should I fault it for failing to push back against the misogyny and sex-negativity of the genre? I do, a little bit. However, I can't deny that Until Dawn tries to do two difficult things and succeeds at both of them, arguably better than any game has before. And besides, if it's a choice between a successful slasher tale or yet another failed, turgid, David Cage-esque grasp at profundity, I'll take the screaming teens every time. Rating: 8.5 out of 10


Disclosures: This game was obtained via retail store and reviewed on the PS4. Approximately 22 hours of play was devoted to single-player modes and the game was played completely through twice, with subsets of chapters replayed an additional 2-4 times.

Deaf & Hard of Hearing: One thing I would add to Danny's statement here is that there's a ticking sound that warns the player when there's a time-limited QTE or choice on the screen. Because this sound is routed through the controller it may be possible to turn it way up to help hearing-impaired individuals but otherwise QTEs may be failed without warning.