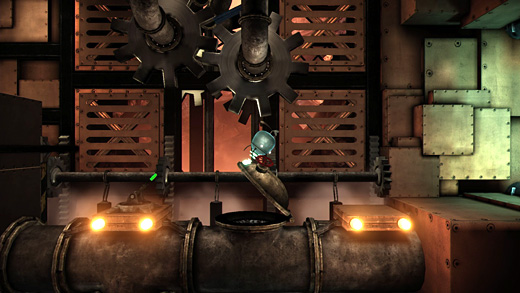 WTF What, exactly, does a world of robots need a giant, beating heart for?

Graphics are a scam. Executives at hardware manufacturers and game publishers love to say that genuine photorealism will bring video game storytelling to the next level. The hard truth, however, is that games need compelling design to be memorable. As a case in point, take Unmechanical, a puzzler that's absolutely gorgeous and completely forgettable.

Unmechanical makes splendid use of the Unreal engine's capabilities when it comes to 2.5D worlds, with lush visuals that blend naturalistic rock, beautifully animated machinery, and disturbingly organic surfaces. Although the robots themselves are a bit too reminiscent of Machinarium, Unmechanical looks as good as any game ever needs to. At times it seems that the developers themselves fell too much in love with the visuals, as the game has several giant rooms that seemingly exist for no other reason than to be pretty.

Even when there's something to do, it isn't always interesting. Unmechanical has no intellectually challenging puzzles, no enemies, and no danger of death. The game only becomes marginally difficult in a few puzzles that require precise timing and positioning, which can be tough due to the protagonist's wobbly movement. In most cases, though, just doing the most obvious thing will result in a solution. This straightforwardness is likely because the robot protagonist has no abilities besides picking up and dropping objects.

Unmechanical does sometimes get overly finicky. For instance, one puzzle involving adjusting a power level by turning on lights and had three combinations that seemed to satisfy its requirements, but only one was accepted. The physics occasionally behaved strangely, as well, The little robot sometimes could not always pick up objects it should have been able to, and released objects often seemed to have less momentum than they should.

Unmechanical didn't always make it clear what succeeding at a puzzle accomplished because the effects often occur offscreen. Even when the consequences are visible it's not always certain what goal they help achieve. The inscrutability of many of Unmechanical's areas means that the player ends up solving puzzles simply because they've been placed in front of him, without any sense for how the solutions will help his progress, or what "progress" even means.

This mirrors the game's larger sense of purposelessness. Unmechanical's story is so subtly presented that it is, in effect, completely absent. Although the world can be visually striking, without any unifying narrative or apparent scenario it comes across as little more than an incomprehensible concatenation of images. At no point does Unmechanical communicate what its protagonist wants or why it is going through all this trouble. Given the amount of destruction the robot wreaks, the lack of apparent motivation makes him come across as a jerk.

That also keeps Unmechanical from making much of an impression. The game is easily short enough to finish in an afternoon even if you're doing other things at the same time. Its finale feels even more abrupt than it is, because there's no crescendo of difficulty or complexity, no "boss" puzzle. With little warning, Unmechanical simply ends, and without a strong story or memorable puzzles to hang its hat on, it fails to leave a mark, despite its lovely visuals. Rating: 6.0 out of 10.


Disclosures: This game was obtained via publisher using Steam and reviewed on a home-built PC running Windows 7, equipped with Intel i7 processor, 8 GB RAM, and a single Radeon 6800 HD-series graphics card. Approximately 3 hours of play was devoted to single-player mode and the game was completed.

Parents: This game has not been rated by the ESRB. Unmechanical contains no enemies or risk of death, and should be safe for all ages. Younger children may find the organic aspects of the environment (a giant beating heart, a cavern made from a throat) disturbing.

Deaf & Hard of Hearing: No essential sound cues are present, although at least one puzzle will have an additional step for hearing-impaired players. There is no dialogue.