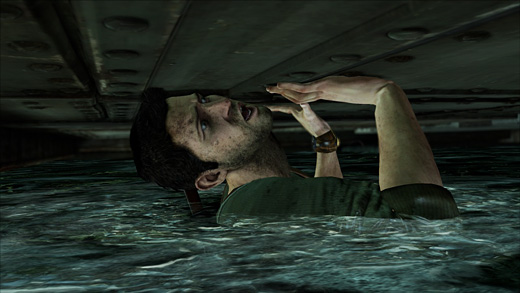 HIGH The hallucinatory sequences in Ubar and Yemen.

LOW Gunfights on the water and in a sandstorm magnify the significant deficiencies of the gunplay.

WTF These guys are really staying in a burning building to shoot at me?

straitjackets the player into a highly scripted, linear path through gameplay to cinematics. Regardless of how one feels about this sort of game (and I don't mind them) the demand is there, the games are there, and we ought to judge them on what they are trying to be. To wit: does Uncharted 3 succeed at being a playable movie? Although the series represents the prime exemplar of the cinematic action genre, each Uncharted game has been a rollicking movie about a wisecracking, globe-trotting archeologist fused to a plodding game about a man who climbs things and shoots people from behind a crate. Drake's Deception is a better movie, a worse game, and brings the two only a little closer.

Uncharted 3 continues Nathan Drake's habit of making the mistakes his purported ancestor avoided, this time by seeking out the lost city of Ubar, the "Atlantis of the Sands." As usual, his actions serve only to reveal the city to villains. In this case, they are the sinister Marlowe, (played deliciously and too briefly by Rosalind Ayres) and the distressingly bland Talbot. They seek the city for reasons that do not hold up to any sort of scrutiny. It's also revealed that Marlowe's interference brought Drake and his mentor Sully together 20 years previous, and their relationship is explored through the traditional method of showing a flashback and setting up rescue/revenge scenarios.

Easy as it is to needle Uncharted 3's plot after the fact, pretty much all of it works while the game's in motion. Naughty Dog's exquisite motion capture and acting helps enormously, conveying emotions in a way that avoids both the uncanny valley and the mass of facial tics that inhabited L.A. Noire. Their work supports several wonderful, subtle moments alongside the standard blockbuster bombast.

Naughty Dog didn't skimp on the location graphics, either. The desert and Ubar, although introduced in shades of brown and gold, look fabulous. These areas demonstrate that it's not just the color palette that makes modern games look drab. Nonetheless, even these reasonably attractive parts of Drake's Deception show that it isn't as visually interesting as it could be, a point that's driven home when Naughty Dog cuts loose with colors to create a ship graveyard and a overgrown French chateau. While even the sterile, monochrome levels here are a cut above the contemporary graybrown morass, but the lush majesty of those rotting hulks shows what wonders we've been missing from modern shooters.

Alas, then, for the dullness of what goes on in those spaces. Three games on, the platforming is still jerky, halting, and at times frustratingly specific about the exact direction players must pull the stick to jump. Although handholds are usually easy to spot, the game is often unclear about communicating where to go, or why a route that looks passable isn't. This tends to make the player confused in a way that Drake isn't, something that Chi remarked on in his review. 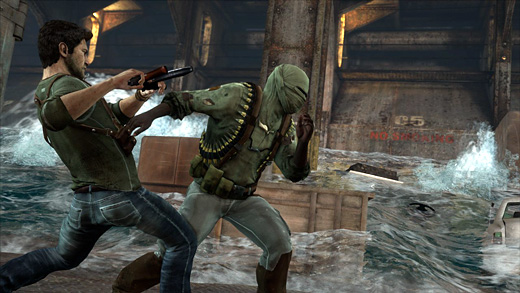 Uncharted 3's numerous chases and escapes mostly work well, however, as careful layouts make the path clear while the situational pressure makes the specificity more tolerable. Naughty Dog, apparently aware of these advantages, filled the game with as many of chases as it possibly could, making the game feel overly frenetic while diminishing the emotional impact of each event. Drake is still afraid, but the player has seen it all before.

The exceptions to the formula are the game's few hallucinatory sequences. Uncharted 3 does a good job of interfering with the player's perceptions without rendering the game unplayable. With these segments being unique and unpredictable, they keep the player off-balance. Even though the player knows that they're hallucinations, he's is forced to treat them as reality, just as Drake is. In these moments the player really is inhabiting the character.

The same cannot be said of the gun battles. The Uncharted games have rarely done a good job of making Drake's regular murder sprees fit in the same world with the rest of the action, and this one continues the trend, shoehorning gunfights in whether they fit the plot or not. Here is a game where characters will make a big deal of sneaking into an airfield quietly and then happily spray bullets all over a warehouse and stockyard without repercussion. Later, after a strong sequence palpably conveys Drake's thirst, exhaustion, and near-madness in the Rub' al Khali, he instantly becomes spry again for a gunfight, only to be near fainting once more when a cut-scene demands it.

At least in the previous entries the gunplay felt somewhat fun. Uncharted 3, by contrast, has the worst shooting I've played since Deadly Premonition. The sluggish, finicky reticule makes aiming an unpleasant chore, all the more so because of the resilient foes. Enemies, even very early in the game, will happily take multiple bullets to the torso without so much as a twitch. To have any hope of clearing an area in decent time, one must place every bullet between the eyes, multiple times if they're armored. Of course, Drake's enemies are numerous and don't fear death, so every gunfight goes on at least twice as long as it should.

The fisticuffs fit the world better, but Uncharted 3's shallow punch / counter system simply can't stay interesting over the course of the whole game. The repetition is especially obvious in the case of the strongmen, who are over-patterned and overused. Context-dependent knockout moves add some helpful spice to the fistfights, but their contribution feels more like visual flair than gameplay depth.

…And that's the real problem, isn't it? With Uncharted 3: Drake's Deception

, Naughty Dog has made further strides in graphics and character presentation, where their existing work was already unparalleled. The playable segments, however, are still pace-killing busy work seemingly strewn between cinematics just to give the player's thumbs a workout. The platforming has the same fundamental shortcomings it did in the first game, and the combat seems to have actually regressed. Three games in, Naughty Dog still struggles to make a title that's a cohesive, playable movie, rather than a double feature where movie and game each inhabit a different world. In its best moments, Drake's Deception bridges that gap. Those moments, though precious, are rare, and like Drake's comrades, I've begun to wonder if the game is worth the candle. Rating: 7.0 out of 10.


Disclosures: This game was obtained via retail store and reviewed on the PS3. Approximately 14 hours of play was devoted to single-player modes (completed 2 times) and 0 hours of play in multiplayer modes, because I found the gunplay intolerable and the prospect of playing something that was only that made me retch. This review strictly covers the single-player mode.

Parents: According to the ESRB, this game contains blood, language, and violence. Surprisingly, this rating omits the constant tobacco use and presence of alcoholic beverages (i.e. there is an extended fight in a bar). This omission seems quite strange given that, for instance, Professor Layton received an "alcohol reference" warning because there is a wine cellar in it. Regardless, the game is appropriately rated T. There is a lot of shooting and brawling, mostly bloodless, but little else to offend those who aren't puritans.

Deaf & Hard of Hearing: Subtitles are available for the main dialogue. In the gunfights, sound cues are helpful at identifying flankers, so combat may be more difficult with poor hearing.

Remember those big brutes you had to beat down with your fist? Kinda like a QTE mini-game within a game (yo dog! ;P) And I think I get where they got the idea. It’s like from an Indiana Jones flick where Indy has a hard time beating down one of those big giant dudes and finally when he lands that critical punch, the brute finally falls and you’re like YES! I think that’s the feeling the developers were going for. But I think they totally forgot that other scene where there was a giant dude with a giant sword! And… Read more »

I don’t know how these play out when animated, but something about the placement of Nathan Drake’s head in the screenshots make me very uncomfortable. Is it about to be unhinged?! Yikes!

…and I didn’t really analyze it myself, but I’ve read, and it does “seem”, that the gunplay in multiplayer is much more fast-paced, and doesn’t play as cumbersome as it does in the campaign. Couple that with the fact that I loved the multiplayer in Uncharted 2 and here the features are more plentiful, and I think it would have been worth your time to check it out. Still, great insights into the campaign. I felt exactly the same as you did when Drake grabs his gun and starts shooting after practically dying in the desert. Then again, movies in… Read more »