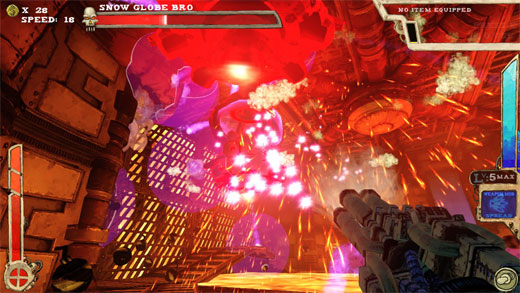 HIGH Spotting a seemingly unreachable area in a small room, then finding the large crate maze that led to it.

LOW Getting through Logistics perfectly, only to get taken out by the Egg Scrambler.

A lone, lost marine approaches a forbidding tower on a mission to take down the cruel aliens inhabiting it.

…No, wait. Actually, it's a young girl with a mysterious power approaching the tower to avenge her parents.

…Sorry, no, what actually happens is that an '80s bro has to bro out with his new bro Brody.

Look, it doesn't matter, okay? There's a tower. There's always a tower. And robots. Robots with guns. And somebody has to shoot the robots, except maybe for the nice ones that just want hugs. That's the deal with Tower of Guns.

Depending how liberally one wants to use the word "roguelike" to describe a first-person shooter, Tower of Guns qualifies. It has five levels and five or six bosses depending on the player's choice and attentiveness. The player always starts in the Foyer and ends with Logistics and Sanctum, but the other two levels, and the internal structure of the levels themselves, is chosen randomly. A library of rooms and room pieces is assembled to make every trip through the game unique.

(Each trip also includes a randomly-chosen story related by silly dialogue boxes that can generally be ignored.)

The essence of Tower of Guns is its combat and level design, which hearken back to earlier days of the first-person shooter. Regenerating health? Not here—health can only be earned by killing enemies. Cover? Tower of Guns barely uses it; the game instead places a premium on mobility. Bullets, both the player's and the robots', move slowly and can almost always be dodged. Of course that's easier said than done when the game dumps the player into a room with more than a dozen turrets. The sheer quantity of lead filling the air sometimes makes Tower of Guns feel more like a bullet-hell shmup than an FPS.

The old-school feel stretches into the level design. The contemporary emphasis on generating believable, useful spaces is refreshingly absent here. Instead, Tower of Guns focuses on providing rooms that are interesting to fight and move around in.

As with any old-school FPS, the game's rooms are infested with multiple secrets. In some cases these areas are visible right away and just require some creativity—or the right upgrades—to reach. At other times, near-archaic techniques like shooting the walls to see where bullets disappear are necessary, but finding the secrets is usually worth the effort—not only because of the rewards, but also because these areas are sometimes larger and more complex than the main level. The way Tower of Guns' rooms expand in new and interesting dimensions is a continual and practically inexhaustible delight.

Tower of Guns has old-school difficulty as well. By modern standards this is a very tough game, even though a successful run generally takes less than 90 minutes. Enemies hit hard, and health pickups don't help much. Despite this, the game remains very much winnable, as the player can choose helpful perks before starting a run, and can also pick up "badges" during the game that make things easier. Enemies drop experience that can be used to level up the player's weapons, though getting hurt will cause the equipped weapon to level down.

Initially, a player has two perks and two guns available, but more unlock fairly quickly, and the vast majority of weapons can be unlocked within 20 attempts at even a modest skill level. Once in the tower, the player can find (or buy) additional guns, as well as mods that can make sawblades seek out enemy turrets or cause rockets to fire out in a shotgun spread, among other things.

The player can also find items—a mixed bag of helpful and essentially useless goods—and the aforementioned badges. These can enhance the player in multiple ways: adding a second (or third, or fourth, or fifth, etc.) jump, adding armor, and decreasing (or increasing!) overall difficulty. Unfortunately there's no way to see what badges have been picked up in the middle of a run—a problem since many of them have no obviously-seen effect and the descriptive text can disappear before a player has a chance to read it.

Tower of Guns is a one-man production, and this occasionally shows through. It's not a big deal that some of the wall decorations are permeable. Even the two or three game-breaking bugs I ran into aren't a major issue when the stakes of any individual run are so low, although I may have tossed my mouse when the game crashed after I beat the boss in Logistics. A more serious problem is that scarce and valuable loot can hang in the air, get stuck on a wall, or disappear beneath the floor, denying the player much-needed help. This is compounded for health drops, which often require the player to be very specific about running through them.

Tower of Guns also falters when it tries to make itself a first-person platformer. Because the default jumping ability is so weak and the upgrades can't be counted on, some late-game areas depend on floating accelerators to move the player around. It takes some time to learn how to use these, and I never got comfortable with them. In general these rooms felt like the game was trying to be a bit too clever.

Despite these minor hiccups, Tower of Guns almost perfectly achieves what it sets out to do. The tower can be run quickly, but the array of weapon and perk choices, combined with the randomness of the drops, the bosses, and the levels themselves, produces an enormous variety that ensures running it almost never gets old. While the degree of difficulty may not suit everyone's taste, Tower of Guns provides old-school FPS fun over and over again, a little different every time. Rating: 8.5 out of 10


Disclosures: This game was obtained via developer and reviewed on a home-built Windows 7 PC equipped with an Intel i7 processor, 8 GB RAM, and a single Radeon 6800-HD series graphics card. Approximately 16 hours of play was devoted to single-player modes (completed multiple times). There are no multiplayer modes.

Parents: As of press time this game has not been rated by the ESRB. It contains bloodless violence against robots and perhaps a drug or alcohol reference if you squint. There's nothing here to get concerned about, so I would rate it E, though your child may not appreciate the degree of difficulty.

Deaf & Hard of Hearing: The sound of enemies appearing, firing, or pursuing you is often very helpful in identifying threats in the level that can't be seen at the moment. You may experience some unexpected deaths if you can't hear these cues.