It's all an allusion 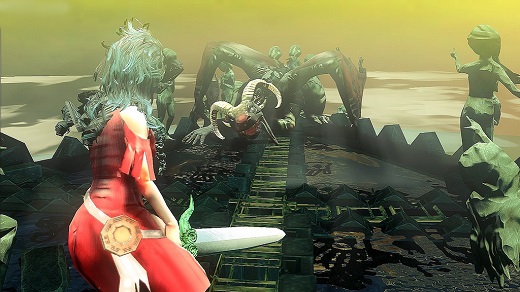 HIGH Answering the knocking on the well lid.

LOW The "Beauty" dream, which was pointlessly frustrating thanks to bad platforming and inane enemies.

WTF Why put "interact" and "attack" on the same button when the final battle requires correct distinction between these actions and ten controller inputs are free?

Usually, when my colleague Brad slags off a game I ignore it myself, so his negative review of Toren might have been the end of that game for me. However, he said a magic word ("Ico") and I saw a few positive impressions elsewhere. So, I decided to give Toren a try myself, playing the Steam version to increase my chances of successfully finishing it. I did manage to complete the game, and I think Toren has many redeeming features. It has many deep flaws, too. If Toren is a success, it's only a partial one.

I'm happy to say that on PC Toren appears to be more stable than the game Brad experienced on PS4. Main character Moonchild does get stuck on the scenery temporarily at times, but I never found my progression blocked. I didn't have any framerate or screen tearing problems using default settings, and Toren looks reasonably good that way, although the character models tend towards the stiff side and their animations and collisions are awkward.

This ends up not being a problem because character models rarely interact. Toren builds an atmosphere of desolation and mystery similar to Ico or Shadow of the Colossus (and its score openly apes Kō Otani's compositions for the latter). However, it lacks the core language of contact—holding hands, riding, climbing—that animated those games emotionally. For the most part, Moonchild climbs the tower alone.

Toren's air of mystery comes from the slippery nature of its reality. As she climbs the tower, Moonchild dies and is reborn repeatedly, and moves back and forth between the world of the tower and a world of dreams. In contrast to Brad, I felt this was all of a piece, or at least broadly coherent. The dreams serve to introduce gameplay elements and reinforce ideas from the main adventure. Their ritualistic elements and stated main ideas also tie back to the Kabbalah and the tree of life, which are central symbols of the main world.

Really, it's hard to figure out what part of Toren isn't a series of symbols and references. Moonchild's repeated cycle of death and rebirth, her femininity, the appearance of blood, the switching between white and red clothing in the various worlds… all of this ties into the great tapestry of representations built around the moon. The tower and the sun appear as masculine signifiers and also hearken to creation myths like the Tower of Babel. This is in turn allows the game to weave in the Kabbalah and the Tree of Life.

This web of allusions all works together, so I don't feel that Brad is correct when he says Toren is incoherent. However, Toren leans so heavily on its references and symbols that unless they're at hand in your mental library, the game doesn't make any sense at all.

Symbols are spices, not a meal, and best used to add depth to a story that's compelling on its own. Strip the symbols out of Neon Genesis Evangelion and it's still a unique and fascinating take on the giant mecha genre. Take the Kabbalah, the tree of life, and feminine moon out of Toren and the game vanishes completely. Its own story is so simplistic, and the Moonchild's character so nebulous, that Toren has no core. There's no main dish for the spices to complement.

Toren isn't even built all that well for those who appreciate the symbols it's weaving together. The dreamlike visuals and starkness of the tower draw the player in and invite contemplation of the ideas Toren is working with, but for reasons that aren't quite clear, Toren also throws in tiny little annoying monsters and occasional platforming challenges. Because the combat, when present, lacks feedback and the platforming is floaty and inconsistent, these become pure irritants. Although Toren already feels pared-down, it would have benefited enormously from removing or substantially altering these elements.

This leaves Toren a good bit shy of what it could have achieved. Its symbology is fascinating, but its own animating story is threadbare, leaving too little to hang onto for players who don't care about semiotics. Those who do want to give in and bury themselves in Toren's mysteries, however, will too easily find themselves struggling against the weaknesses of its design and make. Short as it is, Toren's incredible density of symbols will make it worthwhile for those who want to take a deep dive into mythology. The ideas Toren refers to, however, are far more interesting than the game itself. Rating: 5 out of 10


Disclosures: This game was obtained via retail purchase and reviewed on a home-built Windows 7 PC equipped with an Intel i7 processor, 8 GB RAM, and a single Radeon R9 270X graphics card (game was played on default graphical settings). Approximately 3 hours of play was devoted to single-player modes and the game was completed twice.