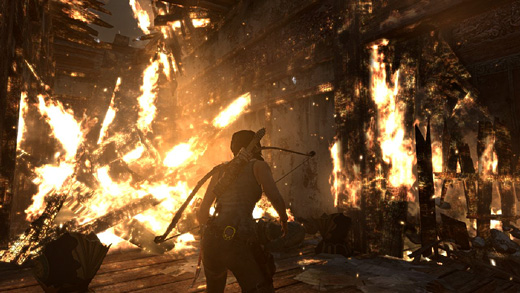 Series lead Lara Croft finds her way into a likely cave or building and is confronted with an environmental platforming puzzle. It's never difficult, but if the player gets hung up, Lara will helpfully supply a clue anyway. Just past the puzzle, Lara will find a chest, which she opens. She gasps in awe and delight, then reaches in to grab something. The player never sees what it is, although sometimes the adventure produces a part Lara can use to upgrade her handgun.

That seems simplistic and silly, but if tombs were this easy to raid, maybe they really would be a convenient place to store spare gun parts. However, it's too easy (and perhaps unfair) to complain that Tomb Raider barely has any tomb raiding—after all, Nathan Drake keeps finding maps even though his game is called Uncharted.

Although it uses a pipes-and-pools structure rather than pure linearity, Lara's rebooted game obviously draws from Drake's template using the same fundamental recipe of third-person cover-oriented shooting mixed with ledge-clinging traversals, but despite the obvious similarities, Tomb Raider elaborates on Uncharted's core elements in interesting ways.

Lara has access to numerous tools that Drake does not, and while her climbing axe boils down to just another kind of ledge to grab, the rope arrow allows her to disrupt the game's broken terrain and invent new pathways across it. Combat gains a particular emphasis on mobility, in large degree because the game's enemies hurl Molotov cocktails with pinpoint accuracy at phenomenal range, forcing frequent displacements. The mad cultist castaways who inhabit the island also frequently close on Lara, allowing the game's awkward, messy melee to take over.

That sounds, perhaps, like an indictment, but Lara's goofy scrambling and desperate improvisations give the combat real character, emphasizing that Lara is not a well-oiled killing machine in this series-rebooting origin story.

Unfortunately the design doesn't let this idea breathe. Early in the game Lara kills her first man and is obviously moved. Apparently, she decides she likes the feeling, because within a few moments, she's choking men to death with her bow. Then things really get going and Lara slaughters her way through the entire island where she's stranded. 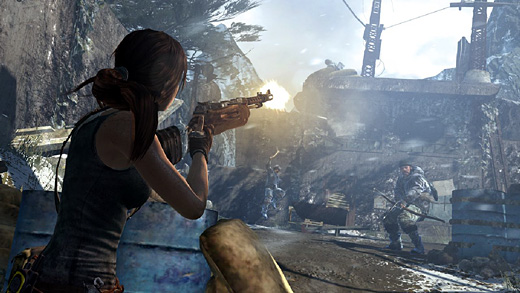 Tomb Raider's eagerness to shoehorn combat into almost every environment—even a centuries-old galleon shipwrecked off the beach—serves the game's fiction poorly, as is typical. Worse, it overdevelops the player's expertise in the system. Only a few levels pass between awkward scrambling and headshot city. The game, interested in depicting Lara as a "survivor," must then sustain this angle with an upgrade system based on the idea that Lara is building homemade weapon parts from unspecified scrap. This suggests her college offered some interesting minors.

This underdeveloped survivor angle also pushes the game to have various forms of hunting and collecting, and even a "sixth sense" visual cue system to make it all easier. Everything functions perfectly well, but it feeds into an idea that isn't all that interesting. Of course Lara is a survivor: she's the protagonist of a video game. Lara's also a brilliant archaeologist, but I suppose that trait doesn't connect in any obvious way to braining a dude with a rock. So, we get to experience hours of combat, but not to see what treasures the tomb raider is finding when she raids tombs. The ancient relics instead boil down to a handgun part.

The feeling that something important has been omitted pervades Tomb Raider. Its island of Yamatai doesn't feel like a real place at all, or even like a convincing fake one. Lara spends a large portion of the game clambering around a shantytown the cultists built from scavenged metal, but apparently failed to furnish with chairs, tables, beds, or any place to cook. The whole joint is just an endless succession of game-flavored empty metal rooms, liberally littered with crates and explosive barrels. When Lara comes across the place, she asks how anyone could live this way. The simple answer? Nobody could, or would.

The story is a similarly slipshod affair. Lara impales herself through the side in the first fifteen minutes of the game, but this grievous injury and many others have no functional effect until hours later, when Tomb Raider decides it's time for an irritating slow-walk segment. The game gives the player almost no opportunity to develop relationships with the thinly-realized supporting cast, generally defeating its efforts to draw pathos from their fate. Lara herself, although apparently brilliant and insightful, is painfully slow to realize even the general outline of what the island's inhabitants mean to do to her friends.

Despite all of this, Tomb Raider has moments where it works almost perfectly. When Lara is making a mad dash towards a machine gun, trying to outrun its aim, or sneaking through a darkened forest, or slipping through a temple full of monsters that hopelessly outclass her, the game captures an exciting asymmetry and sense of peril. When she climbs the disintegrating tower at the end of the game, charging into danger to save her friend, the frenetic nature of the platforming expresses her mounting panic.

Instead we have tedious gunfights, simplistic puzzles, directives to gather nine mushrooms, and tombs full of relics we never see. Tomb Raider

is a fine game, but something essential feels like it has been left out. Lara seems to have found the map, but missed the treasure. Rating: 6.5 out of 10.


Disclosures: This game was obtained via retail purchase and reviewed on the Xbox 360. Approximately 16 hours of play was devoted to single-player modes and the game was completed. No time was spent in multiplayer modes: this review covers single-player only.

Parents: According to the ESRB, this game contains blood and gore, intense violence and strong language. At several points Lara ends up in areas that are full of dismembered bodies. Much of the violence is short-range, physical and brutal. The game has an online multiplayer mode, and parents should expect that it to add a great deal more crude language to the game.

Deaf & Hard of Hearing: Subtitles are provided for all major dialogue but not for some enemy conversations and barks. As these conversations are often the first indicator that an enemy is nearby the difficulty may be somewhat higher for hard-of-hearing players.

I have also had the feeling that something was missing in the game, which was a feeling I experienced back in 1998 when I played Tomb Raider 2. More combat, less exploration. And I remember that was a a design choice that rose out of fan complaints that the first game was too quiet. Too much wandering, not much action. I never had a problem with that aspect of the first game. Tomb Raider 1 was, to me, a defining moment for 3D games. It showcased the kindof movement and peril that could be created with the new hardware. With… Read more »

Great review – I think you exactly nailed what is right and wrong with this game.

It’s frustrating that one can see what a great game it could have been and then seeing it spoiled by the waves of henchmen and inconsistent internal logic.

To be honest I haven’t played this game yet. Like with Dead Space and a few other games, the thing that drew me to the series has been tossed aside. Since The Angel of Darkness and Underground, the developers haven’t figured out what to do with Lara. I may have to wait until Tomb Raider II, if there ever will be one, (or one published by Square Enix) to see where they are taking things. It could be that this is just an origin story and we’re right back into the tombs. If that’s the case I’ll pick up a… Read more »

Why so much combat? It should obviously have a bigger emphasis on exploration, puzzles etc. Why all the clues and hand-holding? There is no satisfaction to solving a puzzle if you haven’t actually solved it. However, it was always going to be this way – the world is full of idiots and a big-budget game like this has to sell. I suppose Tomb Raider is a victim of it’s own (90’s) success. Devs are terrified these days of childish players ever getting “stuck,” logging onto to the net to whinge DIZ GAYME SUCKZ IS SO BORING. I am, however, mightily… Read more »