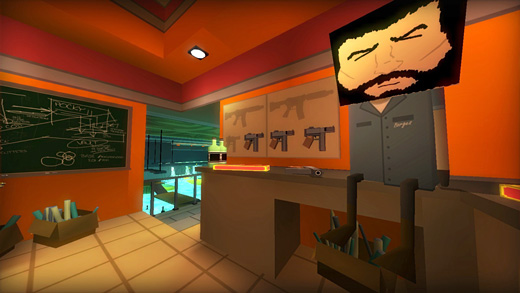 LOW Trying to do something with that first radio for 5 minutes only to fail.

We've all seen that graphic comparing early FPS design to the current article, showing Doom's "Central Processing" level laid out in all its complex glory next to a single tube-like hallway representing a recent-vintage corridor shooter. It's an effective and damning image, and one that Thirty Floors of Loving does nothing to fight. Instead, Brendon Chung turns the modern minimalism into an effective storytelling tool.

Thirty Flights of Loving takes that corridor diagram, cuts it up into pieces, throws half of them away, tapes the rest at random onto a sheet of paper and then wads that up into a ball. The game is a hallway where the player has only one direction to go at any moment. This does not feel constricting because each bit of hallway is short, and leads to a place that may be far away in space and time.

Thirty Flights of Loving would be unbelievably oppressive if the player had to walk through every inch of its airport. So, Chung skips the boring parts. Only the moments that matter survive to tell a story that's powerful despite its brevity. Thirty Flights of Loving does a better job illuminating its characters in 15 minutes containing no real speech than Square-Enix can manage in a whole series' worth of voiced half-hour cutscenes.

Chung does more by using less. The surreal setting of Nuevos Aires has a backstory and a character of its own that Chung is content to let sit at the edges of the screen or appear in small touches. The player is free to see the "Prohibition License", to notice how a hallway full of commuters ignores a man bleeding to death, or to simply plunge ahead and see how the story ends, to understand who these people are and what these events might mean.

Thirty Flights of Loving is precisely as long as it needs to be, and contains exactly what it needs to contain. This efficiency makes it a richer experience, not a poorer one, because it insists that the player engage with the story and piece it together himself, rather than sitting back and absorbing an endless train of cinematics. Chung cuts out every moment that doesn't matter, and trusts in players to fill in the blanks.


Disclosures: This game was obtained via Steam purchase and reviewed on a Windows 7 PC equipped with an untweaked Intel i7 processor, 8 GB RAM, and a single Radeon 6800-HD series graphics card. Approximately two hours of play was devoted to single-player mode (completed six times).

Parents: This game has not been rated by the ESRB. Some characters are shot and bleed profusely, and the main character (and other characters) drink alcohol to the point of intoxication.

Deaf & Hard of Hearing: The game has no essential sound cues and no dialogue. You should be fine.

I think it’s easy to fall into the trap of thinking that Thirty Flights is more style than substance if you’re not paying careful attention. If you just let it all slide off you then it’s just a flashy good time. If you pay careful attention at every moment then I believe you’ll find there’s a lot to think about. The comparison to Pulp Fiction is a good one, and captures some of the structure of the game as well as its spirit. I should also note that the Steam download of Thirty Flights includes Gravity Bone, which is a… Read more »

Hmm, I was very disappointed in this game – it reminded me of the ‘Everybody be cool, this is a robbery’ vignette in Pulp Fiction – flashy and catchy and quoteworthy, but no more than that. Style over substance.

Really liked its predecessor, Gravity Bone, though. And good to see a review pop up here.