A while back I took a quick swing up to MIT to check out the Boston Festival of Indie Games, which was a neat little show I really enjoyed visiting. Of course, as an indie show it had its fair share of games that needed tons of work or were just hopeless, but I got my hands on several really neat games, too. 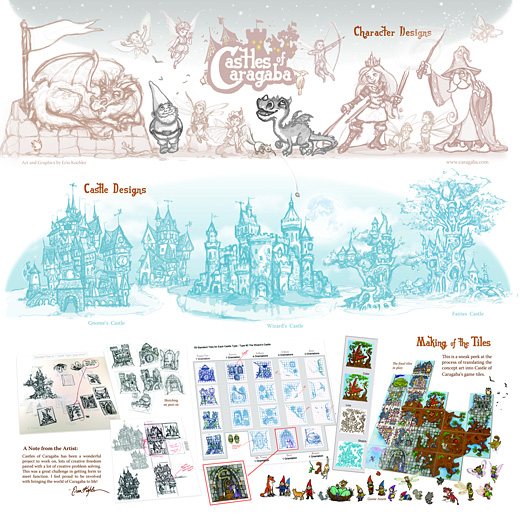 The board game area was a little cramped, and I didn't have time to get my hands on much over there. I did, however, get to play a round of Castles of Caragaba, a tile-based building game for 2-4 players. Games are reasonably fast-paced and the rules are simple enough for family play. The art on the tiles was lovely, especially the fairy castle ones. The game seems to be in the rule-tuning stage, and it needed some mechanism to deal with having many useless tiles in the initial draw. Once finished I doubt it will be the sort of game you marathon, but for family/friends game night or as a palate cleanser/appetizer for more complex games I think it could really shine.

The first game I ran into in the video game area was The Time Tribe, a lovely looking flash-based adventure game aimed at the 10+ crowd. The player has control of a team of four children with different abilities who explore a mansion and eventually travel through time to try and solve a mystery. Historical items in the game have an associated wiki so players can explore the real history behind them. It seemed a lot more interesting than the usual educational game. The demo (the game's prologue) is free and the model for future chapters seems to be a bit unsettled.

The oddest game I played was Codename Cygnus, an "interactive radio drama" for iOS. I suppose it technically is an audio game, rather than a videogame. It's a spy story where all the action is narrated to the player and e has to either say what he wants to do next or tap a button on the screen. The concept is neat, but the bit of the game that I played felt like the creators hadn't yet decided whether to make a straight spy story or a parody. Still, for a bit of James Bond-ish action you could do worse. What this gameplay concept really needs is a child-suitable story, though, like a fairy tale—that would make a great car game.

Continuing on the mobile theme, I played a little bit of Cloud Breaker, a pretty little color-matching game. The concept is simple—slide rows and columns of tiles to match colors—but the way that the tiles collapse down after a color match can produce strings of matches. Seeing a whole cloud disappear after a single move is really satisfying and I think the game could be a really enjoyable action-puzzler.

Possibly my favorite of the day was PWN: Combat Hacking which is already available in the App Store. It's a fast-paced strategy game based on the fake computer hacking that's typically shown in movies. The goal is to take over all the "nodes" on a playing field, using special abilities to enhance attack or stymie an opponent's moves. I had to force myself to stop before I played through the whole single-player campaign right there. Of course there's also a PVP mode, because isn't having hacker battles against your friends exactly what you want from your techno-future?

One of the more conceptually interesting games I played was Apsis, a student project that seems to be turning into something more. The player controls a bird flying through a stylized landscape, with the goal being to flock together with other birds. This seemed like a great chill-out game and very enjoyable on a pure play level. In an unusual twist, it was built for Android, though it seems to be a few months away from release yet.

I got another look at first-person shooter/Roguelike Tower of Guns, a game I first saw this past spring. It looked a little prettier and smoother to me, though creator Joe Mirabello said he hadn't done a lot of optimizing. He still claims it will come out before Thief, so you don't have too long to wait.

I also saw the very odd High Strangeness, billed as a 12-bit action-adventure. The game gives the player to switch between 8-bit and 16-bit renditions of its world, which results in changes to character motion, enemy behavior, and other aspects of gameplay. It's an interesting concept and the bit of story I saw was refreshingly weird, though the gameplay felt a little too familiar even with the world-switching. This should be coming out for PC next year, and since these guys seem to have picked up a publisher a release on consoles may also be in the cards. 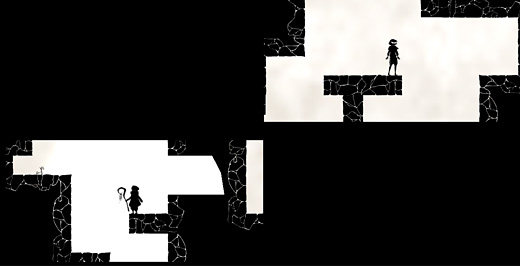 Finally, I played a little bit of Candlelight, a one-person co-op platformer. The player controls a little boy with one hand and a larger girl with the other. The boy has a lantern that alters the world by taking away or revealing parts of the landscape, while the girl has the capacity to actually interact with the world, and apparently some power associated with her mask that I didn't get to use. The game has a nice silhouetted art style, though the platforming felt a little floaty and some puzzles were not well-tuned just yet. Still, I thought it was fairly promising. The game was best when it was more of a puzzler and less of a reflex platformer, so hopefully the dev team will continue in that direction.

Boston FIG was a fun little con and I got to see some cool stuff. I'll definitely be coming back next year.

Funnily enough I think a lot of indie developers get over exposure by a probably well-intentioned press. But I do like your selection of games here. Some have really peaked my interest.