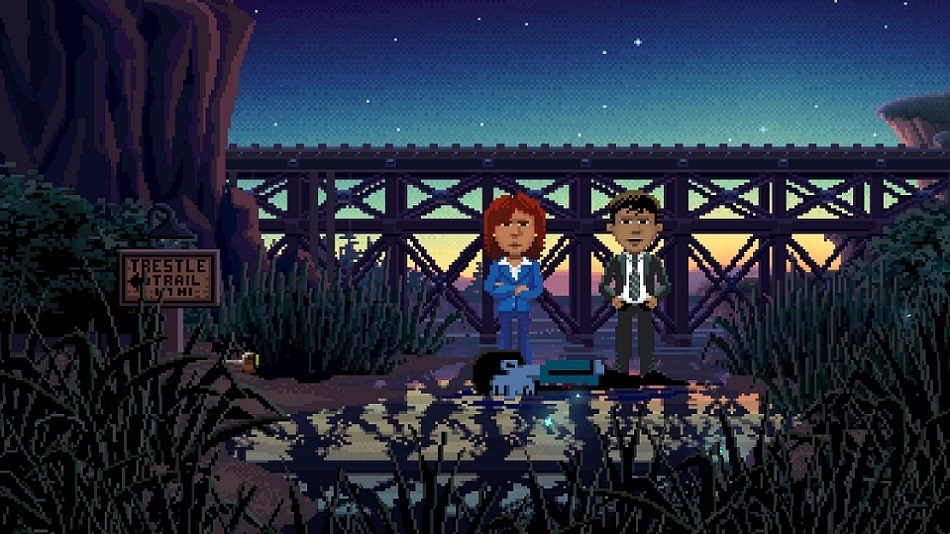 LOW The puzzle to move the truck.

WTF Why, exactly, is there an occult altar on the top floor of this hotel?

Nostalgia is a cynical enterprise. At the urging of corporations and con men, aging boomers have bolted it down like a fistful of oxycodone, sinking into a wistful, dying dream of simpler times as the nation writhes with their poison. Repackaging the past as we wish it had been sells, so of course games must push the same formula as well.

Thus we have Thimbleweed Park, billed as a title that could have been recovered from a time capsule from 1987, meticulously crafted with chunky fonts and pixel art to look as if it’s running in LucasArts’ venerable SCUMM engine. It’s a simulacrum, of course, made not to resemble the games of that era themselves, but how they seemed to us in our heads, with a depth of visual and sound the originals could only achieve when supplemented by a healthy imagination.

Like many nostalgia projects, Thimbleweed is aware that it is a fake and tries to be hip about it. Particularly in the early going, one can hardly stumble onto a new screen without encountering a winking reference to adventure game design, LucasArts history, or even particular games. This is counterbalanced by a wan imitation of Lynchian small-town nuttiness that treats tedious eccentricities as great fun. Still, a few of the jokes land and it’s all right so long as one isn’t too particular about mixing ’90s jokes into ’80s nostalgia or preserving the 4th wall. This is, after all, a game where one puzzle can only be solved by checking a Kickstarter pitch video.

Thimbleweed Park adopts the later LucasArts philosophy of forbidding dead ends or “death”, but it preserves the obscure logic and absurd puzzles that have long been the genre’s bugbear. It adds a further layer of complication by splitting its inventory and tasks among up to five characters. When it locks the player into using a single character, the action occasionally hits classic adventure game bottlenecks, but this sometimes happens even when every character and item is available.

At one point it becomes necessary to move a truck. In order to do this, one must recharge its battery, for which one needs a wrench that can be stolen from some repairmen, but only if they’re working in a particular place  — the wrench is equally exposed in a different spot, but can’t be stolen there. Once the wrench is obtained (which requires supplying a different character with a phone number he should almost certainly already have) the battery must be recharged. The game supplies no obvious place for doing this, nor any reason to suspect that the solution lies at a hidden second exit of a maze the player has already apparently solved for a different puzzle. 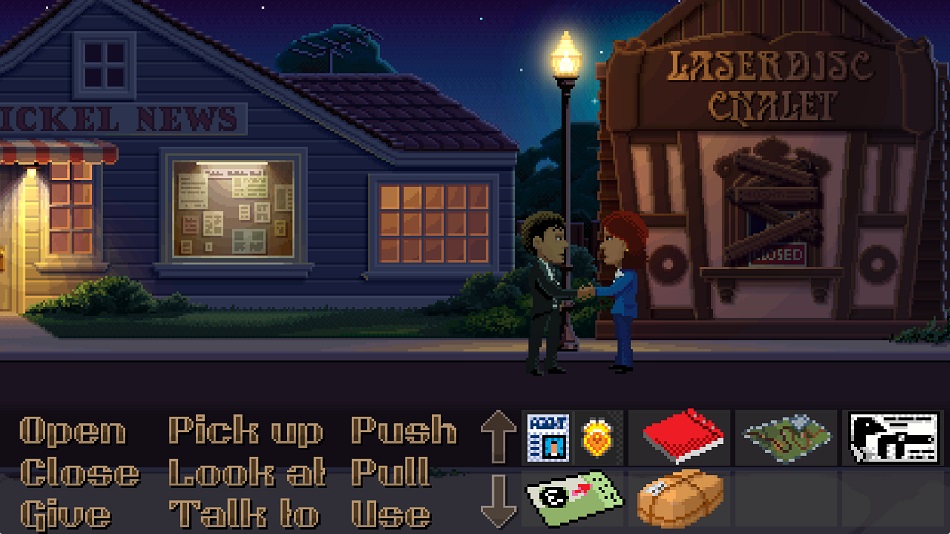 Woe, too, to those who try to reason through what to do next based on what makes sense for a particular character. Especially in the middle part of Thimbleweed Park, the player has to use the characters in a way that’s inconsistent with their needs and personalities. One character goes to a fair amount of trouble in order to repair a computer, even though there’s no reason for her to be doing it. To advance the plot, another character has to obtain a bloody wallet, take it to the police station, and put it in a particular machine, even though he doesn’t care about the investigation, has no reason to suspect the wallet is important to it, and does not know anything about the machine into which it must be put.

Later, some effort is made to explain why many of the characters are working together, but up to the end of Thimbleweed Park they’re required to act on knowledge that could only be shared to them by the player.

That isn’t just a strike against the game’s logic. In its finale, Thimbleweed Park asks the player to respect the characters as individuals, and tries to create emotional impact from fulfilling their hopes. Its puzzles, however, have reduced each character to tools — they’re essentially inventory objects to be used at an appropriate place and time. The player is required to see them as things and not people, and thus the game’s conclusion rings hollow. There’s nobody to save.

On the way to that conclusion, Thimbleweed Park simply abandons answering many of its mysteries. To even mention most of them would invite an accusation of publishing spoilers, but suffice it to say that none of the questions the game poses in its first minutes receive a satisfying answer.

Thimbleweed Park ultimately seems to care about neither its story nor its characters. What’s the core here, then? I suspect it’s just about the easy, wistful smile, and the prick of familiar memory. Do you remember? asks Thimbleweed Park as it displays its lustrous imitation of a bygone era, and on seeing a nod it lies: Yes, it was just like this. Rating: 6 out of 10

Disclosures: This game is developed and published by Terrible Toybox. It is currently available on PC, Mac, Linux, and XBox One. This copy of the game was obtained via publisher and reviewed on a home-built Windows 10 PC equipped with an Intel i7 processor, 8 GB RAM, and a single Radeon R9 270X graphics card. Approximately 10 hours of play were devoted to the single-player mode, and the game was completed. There are no multiplayer modes.

Parents: According to the ESRB, this game is rated T and contains fantasy violence, language, use of alcohol and tobacco, crude humor, drug reference, and sexual themes. Probably true, but the worst of the language is bleeped out, the playable characters themselves don’t abuse any substances that I can recall, and the onscreen violence is muted by the graphics. You’ll see worse than this watching CBS in the evening.

Deaf & Hard of Hearing Gamers: All dialogue is subtitled and no essential sound cues are present. The game should present no problem.

Remappable Controls: The game’s controls do not appear to be remappable. As a SCUMM-style game, Thimbleweed Park can be controlled entirely by mouse or by a combination of mouse and keyboard. A controller may also be used, though I found this slow and awkward.