Zen and the Art of Island Maintenance 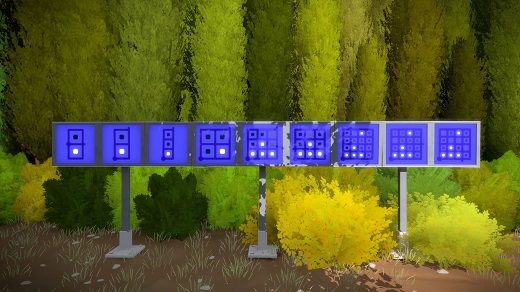 HIGH Figuring out the key to finishing the treehouses.

The Witness is a confounding game, not just because of the challenge inherent in its puzzles, but because it looks like it should have more to it than it does. There are plenty of titles that offer little more than pure puzzling, but by situating itself on a colorful, mysterious island, The Witness seems to imply a multifaceted experience. Those who expect the game to develop a story and offer solutions to its mysteries, Portal-style, will be disappointed.

Apart from exploring the island and finding audio logs along the way, The Witness is rather spare. Its world has a lot of verticality, but jumping and climbing aren't possible. There's nobody else to speak to. Outside of one particular challenge, there isn't even any music—the only sounds in the world are running water and footsteps.

The natural sound contrasts with the artificiality of the island. Video games often fail to depict a believable world, but The Witness isn't even trying with its implausibly adjacent biomes. A desert lies steps away from an orchard, and an autumnal forest is a short jaunt from a mangrove swamp and a bamboo stand.

The buildings come across as equally fake. Every edifice is in ruins, but nothing about them suggests that they were ever whole, or could serve any function if they had been. The Witness is a world that is unabashedly posed, ready for the player to peer into it. It seems more like a stream of consciousness than a real place.

These statements might sound like complaints, but the fakery of the island actually makes the puzzles it presents less jarring. The undisguised artificiality of its setting relieves The Witness of any need to explain why all its puzzles are where they are, and consequently, the game never does. The player is left to suss out what it all means (if anything) from archival videos and audio logs containing historical quotations, almost all of which go on so long that their duration obscures their meaning.

With no story or easily-discernible scenario, the only thing left are the puzzles, which are the only reason to play The Witness. The vast majority of these take the general form of a grid maze, where the player starts in a little circle and draws a line to a terminal nub.

Of course, it doesn't stay as simple as that. Very rapidly the game introduces puzzles that have multiple start and end points, and also consequences for choosing a particular maze exit. Some mazes add conditions: certain decorations must be kept apart, others grouped together, and still others require the player to make mistakes. These indicators transform the grids into logic challenges, and they frequently appear in sequences of panels that elegantly explain their meaning by ramping up from extremely simple to very complex.

Since there's not much to the island setting, it falls squarely on the mazes to carry the game, and if a game's only going to do one thing, it ought to do it well. Unfortunately, The Witness doesn't quite execute here.

On the PS4, the cursor has slippery handling, and the dependence of movement speed on distance from a puzzle leads to motion that often feels too fast or too slow. Although starting a puzzle usually caused the viewpoint to reposition so that the entirety was visible, sometimes this did not occur, forcing a fiddly process of entering and exiting puzzle-solving mode until I was standing in the right place to continue.

Beyond these mechanical issues I have problems with the panel sequences. The instruction series tend to go on too long and spend too much time recapitulating the same lessons, but in several areas (especially the swamp) the meaty and interesting stuff gets short shrift. Series of panels sometimes also had a quirk in that failing would cause them to deactivate, forcing the player to go back and re-solve a completed puzzle in order to make another attempt. This was never anything other than a waste of time.

A second species of puzzle depends on the player's ability to see the panel from the correct point of view or to discover an environmental characteristic that offers an essential clue. To further describe these would be to spoil them, but know that these puzzles are not logical, but epiphanic: no chain of deduction will lead a player to their solution if the clues are missed. The moment of revelation is always a pleasure, but The Witness is unnecessarily terrible at signaling when a puzzle is based on perspective rather than reasoning. Worse, despite a few moments where the two styles combine, The Witness doesn't really make a case that these belong in the same game.

Finishing any seven of the game's eleven main zones will unlock a door at the top of the island's central mountain, leading to a sequence of endgame puzzles that are disappointingly unpleasant and dull to complete. Most of the mazes in this area derive their challenge from being difficult to look at, either because they are awkwardly positioned or because video glitches and pulsating colors make it hard to see them. The color puzzles were particularly painful to complete; after finishing, I had a splitting headache and had to walk away from the game for an hour.

Without spoiling one of the game's delights, I can say that The Witness managed to avoid ending on a low note, but not why. More than any other game in recent memory, it's vital to avoid videos and walkthroughs because having its puzzles and mysteries explained drains the joy from playing. Almost all its pleasures lie in discovery, yet in that process also lie many of its irritations.

The Witness doesn't offer explanations of its world, and only rarely does it unlock new areas. What's behind a solved puzzle is almost always another puzzle. The deliberately spare nature of the game puts all the focus on this core, yet despite this carefulness, playing The Witness constantly made me feel that it needed an editor. The overlong instruction sequences and recordings, and the failure to bring together the two styles of puzzle make it feel rambling and unrefined at times. Perhaps, then, the most confounding thing about The Witness is that it seems to need something it doesn't have, but actually needs less of what it does. Rating: 7.5 out of 10


Disclosures: This game was obtained via publisher and reviewed on the PS4. Approximately 30 hours of play was devoted to single-player mode and the game was completed twice (521 +135 +6).

Parents: According to the ESRB, this game contains alcohol references. These are merely mentions of alcohol in recorded quotes the player can find; you'll see more troubling "alcohol references" if you watch commercial TV for 30 minutes. The puzzles in the game do not require any particular knowledge or intelligence and except for a specific challenge all can be solved with some creativity, willingness to learn, and graph paper. As such I feel this is a suitable game for children.

Accessibility: At present I do not recommend The Witness to colorblind individuals and have some caveats for hard-of-hearing individuals. Audio logs are subtitled but videos are not. One area of the game relies entirely on puzzles that probably can't be solved without color vision, and three additional areas of the game can't be completed without finishing color-based puzzles. While in principle it is possible to reach the end of the game while skipping up to four major areas, the endgame also has color-dependent puzzles. One area game features puzzles that can only be solved using sound cues. Hard of hearing individuals will therefore be able to reach and complete the endgame. However, to reach a secret area on the island it is necessary to complete every puzzle area. As such, some portion of the game will be closed off to colorblind and hard-of-hearing players. Also, I am concerned that some late-game puzzles with flashing, color-changing backgrounds may have adverse effects on photosensitive epileptics.

“Series of panels sometimes also had a quirk in that failing would cause them to deactivate, forcing the player to go back and re-solve a completed puzzle in order to make another attempt. This was never anything other than a waste of time.” This was almost only done for panels which would have been easy to brute force. Deactivating the panel encourages people to think twice before entering a possible solution. “On the PS4, the cursor has slippery handling, and the dependence of movement speed on distance from a puzzle leads to motion that often feels too fast or too… Read more »

I played this on the PS4 as well and I didn’t really notice any issues with cursor handling. Other than that, I’m in agreement with you on the game’s shortcomings. The Witness exudes artificiality, dressing up its sterile landscape and threadbare, nearly nonexistent story with a few clever puzzles and quotes chosen to make it seem more intelligent than it really is.