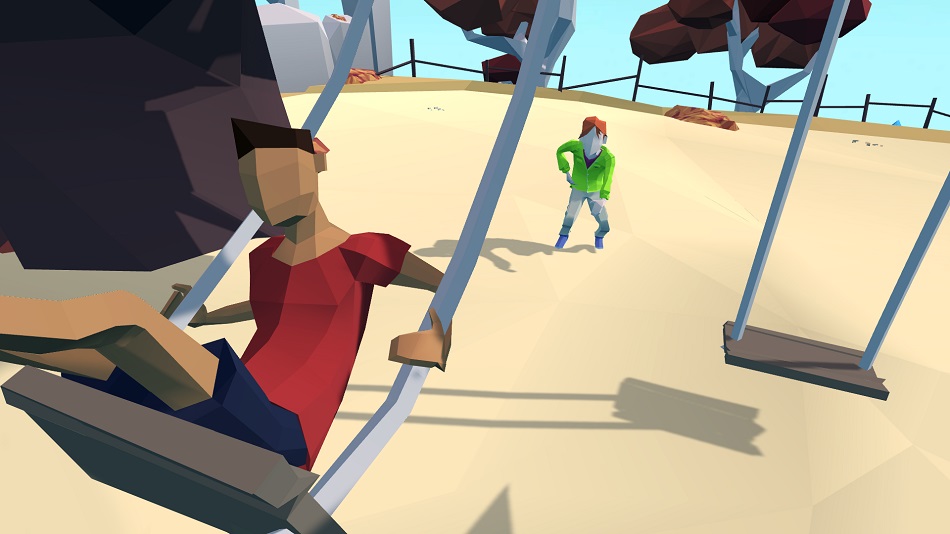 LOW Trying to chop the zucchini.

WTF What is this platforming puzzle even about?

The Way of Life bills itself as a game about making choices, and normally those kinds of titles fall into one of two camps for me. There are ones where at least some of the choices feel like they have consequence — things like The Witcher III: The Wild Hunt and the BioWare library. Then there are the ones that are more like complicated toys to play with. They’re less about emotional investment than they are about poking and prodding systems to see what happens when you try this or that. As an example, think about things like Until Dawn. I’ve enjoyed plenty of both kinds.

Wait, did I say two? There is, of course, a third camp — games that fail at both of these. It is in this group that The Way of Life falls.

Making a choice matter requires context. A player needs to have an understanding of the characters and their situation in order to establish what the stakes of the decision are. The Way of Life falters at this for a couple of reasons, but the key one is that this game is a series of disconnected vignettes that don’t have any clear arrangement in time.

The Way of Life offers 30 scenarios involving either a Child, his father (the Man), or his father (the Senior). Despite a multitude of opportunities, the devs never take the time to define these characters. Though their genetic relationships are clear, their emotional relationships are not, and the player has no opportunity to evolve them because there’s no apparent order to anything, and no vignette builds on a previous one.

Reality doesn’t even seem to be shared between scenes. In one vignette, it’s possible to send the Senior to prison for essentially all his life, so that almost none of the other scenarios in his timeline make sense. Similarly, one scenario hinges on a boy’s jealousy about a best friend who barely seems to exist outside of it. Shorn of contextualizing interactions, the game has to rely on its characters making lengthy expository statements to establish the significance of the choice at hand.

The atomistic and disordered nature of these vignettes also deny them consequence. In a narrative, a choice has to have some effect on the characters or their world. This almost never happens in The Way of Life because the vignettes tend to end immediately after a decision has been made, and all the player gets are a couple of visuals in an ending sequence. These quick endings also make The Way of Life a poor toy, because in the toylike structure, a choice at least causes something interesting to happen. 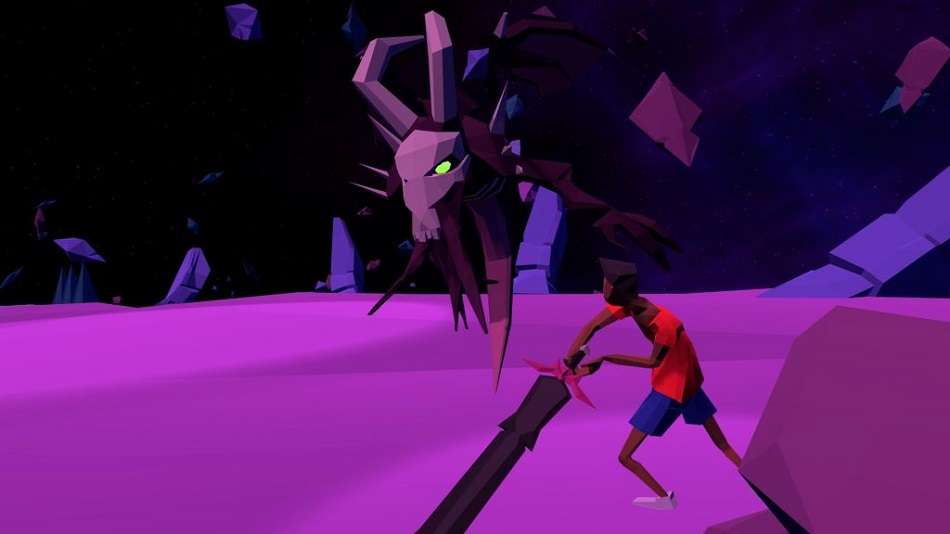 The Way of Life’s vignettes also have the bad habit of lacking clarity. A choice can’t be meaningful to the player unless the player understands what’s being chosen, and can follow the logic that leads from a decision to its outcome. It’s also important to make clear when a choice is being made, and both of these are botched.

In one of the first vignettes I played, I found myself caught in an intolerably long looping tunnel. At one point I turned around to and saw an Exit sign. Going through it caused the Man to overdose on drugs, which was not what I was trying to do for him (the overdose is neither mentioned nor evident in any other scene, natch). More than that, it’s not clear what other choice is available to end the loop. A fair number of the vignettes appear to be tunnels but supposedly have multiple endings, which again speaks to the game’s inability to communicate what its choices are.

The lack of clarity about what’s being chosen or even if it’s being chosen particularly grates when the game uses its scenes to preach overbearingly. In one sequence, the Child whines about his life and the game then it smash-cuts to another child in a city getting bombed. In another, the Senior flashes back to ‘Nam, apparently, and can save a boy who then saves the Child’s life. More frequently, the star character of a given vignette delivers a moral message at the end of the scene, typically in clumsily-worded phrasing that seems more like direct translation than thoughtful localization. It’s almost always cheesy and unnecessary.

The Way of Life only gets more uneven when it adds old-school gameplay on top of its basic walk-click-choose mechanics. In part this is because the game tries to implement a large number of different kinds of minigame. Puzzles appear frequently, but there are also platforming sequences, QTEs, stealth sequences, and some arcade-style stuff. While most of this is playable, very little of it is implemented particularly well, and some of it is genuinely awful.

Quality aside, these gameplay additions frequently comes across as meaningless filler. This happens particularly often with the Child. In one vignette he’s called upon to choose between following a monster or a superhero. This involves several platforming puzzles which aren’t interesting and look terrible. They also fail to illuminate anything about the situation or the choice the Child is making. They’re just cruft. The Way of Life gets this stuff wrong significantly more often than it gets it right.

These failures are only magnified in comparison to the things that land. A scene where the Senior has to learn how to succeed online by memorizing and performing increasingly-tricky sets of instructions is nicely on point, and a walking-focused scene about visiting a graveyard and possibly deciding to stop for tea actually works quite well. The misses far outnumber the hits, however. The Way of Life tries to present a large number of situations where choices matter, but most of them fail to deliver any meaning at all. Rating: 4 out of 10

Disclosures: This game is developed and published by CyberCoconut. It is currently available on PC. This copy of the game was obtained via the publisher and reviewed on a home-built Windows X PC equipped with an Intel i7 processor, 8 GB RAM, and a single Radeon R9 270X graphics card. Approximately 4 hours of play were devoted to the single-player mode, and the game was completed. There are no multiplayer modes.

Parents: As of press time this game has not been rated by the ESRB. The game contains use of alcohol, use of drugs, and violence. One character overdoses on drugs. It is possible to “pull the plug” on a terminally ill character. At times violence is directed towards children, including potentially by the player. While most of content isn’t objectionable and the game’s chunky graphics mute the impact of the violence, I would probably reserve this one for teens and older.

Deaf & Hard of Hearing Gamers: The game contains no spoken dialogue nor any essential sound cues and is fully accessible. The text is not resizable. 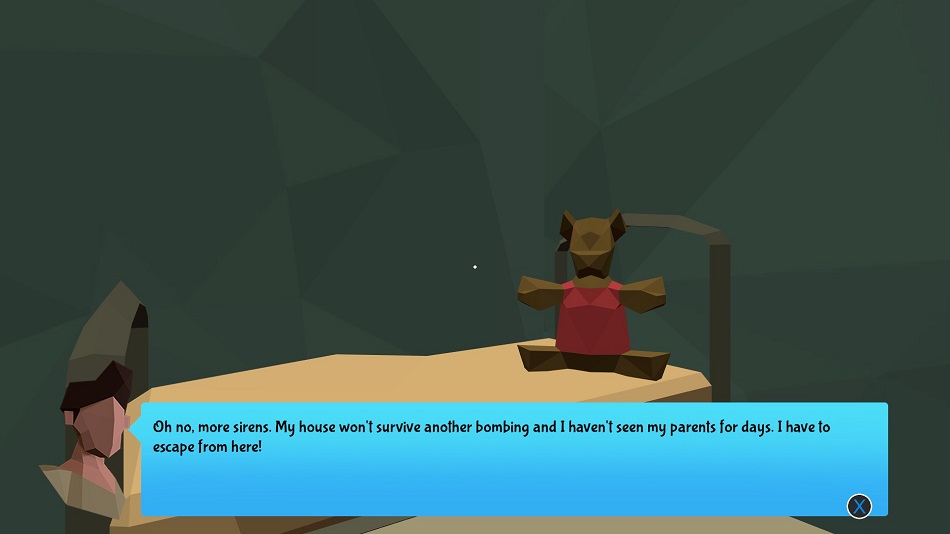 Remappable Controls: No, this game’s controls are not remappable. Keyboard and controller are supported. Motion is mapped to WASD or left stick, look to mouse or right stick, action to E or X, jump to space or B, and sprint to shift or L3 click. Some of this may be inaccurate as the game does not have any place to remind you of the control scheme or any way to return to the tutorial, and experimentation is impossible because some control options (particularly jump and sprint) are blocked in many scenes. The game also has a variety of minigames that required, e.g., all of the controller face buttons.