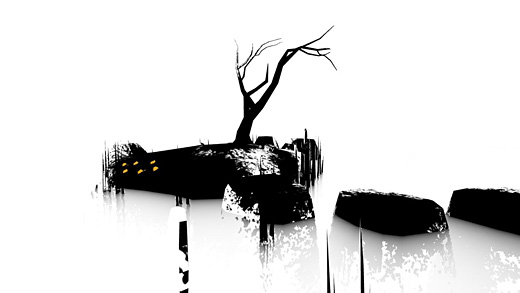 LOW Fumbling in the darkness of the forest.

When most people talk about "black and white" art, they really mean "greyscale". Art that's truly black and white has to be simplified, as much about what it omits as what it includes. Otherwise, we end up with one dark thing moving in front of another dark thing and then the visuals break down entirely, leaving it all looking like one big, shapeless black mass. The Unfinished Swan inspired this thought in a number of different ways.

The Unfinished Swan begins with a level where the protagonist, a boy named Monroe, splashes paint onto a completely white world to define its boundaries so he can cross it safely. The paint itself is all black, though, and the world does not impose any kind of shading. While this works out in places (along the margin of a lake, for example) quite a bit of the time I ended up with a shapeless black mass on the screen, hardly more informative than the amorphous white mass that preceded it.

It's revealed that Monroe is crossing a garden that a king has painted white as part of the cloying story that forms the game's backbone. Presumably the events of the game represent Monroe's attempt to process the death of his mother, an artist with a tendency to leave paintings unfinished. Beyond the first few "aha" moments, however, neither painting things in nor leaving them as they are produces any satisfaction. The potential for feelings of loss and loneliness that might really resonate between the stark, abandoned landscape and Monroe's story gets buried under cutesy fairy-tale narration and a talking hippo.

Eventually shadows and colors start to appear, and then Monroe is off to a different area, an abandoned white city. In this place he no longer has paint, and is instead equipped with water that causes vines to grow. Then he moves on to a dark forest where his ability to sling paint has no real application at all, and he has to run from one pool of light to another. Then he goes to a blueprint world where he can create blocks. Then he reaches his goal, and the game ends.

I can tell you that all these things happened, but I can't say how they connect.

One could argue that the gameplay progresses from outlining an existing space, to creating pathways through a space, to finally creating the space itself. In this context, though, the "dark woods" section stands out as a fruitless detour, as it retreads the first level's idea of outlining an existing space without building on the creative mechanics that the other levels use.

The final phase also feels oddly disconnected from the preceding levels. Creating blocks follows a much more complex procedure than the simple throwing mechanic previously used throughout the game. Additionally, this block-creation phase gets segregated off into its own separate world, which detracts from the immediacy and physicality that informs the rest of the game.

In the end, it all feels a jumble, with unrefined ideas piled on top of each other until they obscure, rather than reveal, the core ideas of the game. Sometimes a story can come to the rescue in situations like this, but neither Monroe nor the king is interesting enough to hold things together on the narrative front.

The Unfinished Swan isn't without its charms, and there were moments in the abandoned city, with the vines overgrowing walls and bridges in all directions, that I almost loved it. However, in its very short runtime The Unfinished Swan introduces too many different ideas and doesn't sufficiently explore or refine any of them—not even the bad ones. That might suit the theme, but it makes for a game that feels frustratingly incomplete. Rating: 6.0 out of 10.


Disclosures: This game was obtained via retail purchase and reviewed on the PS3. Approximately three hours of play was devoted to the game, which was completed.

Parents: According to the ESRB, this game contains fantasy violence, which is actually a bit of a stretch, in my opinion. Very young children might find the last major segment of the game a little scary or frustrating, but aside from that I can't imagine any real objections to the material.

Deaf & Hard of Hearing: I don't anticipate many problems. Subtitles are available for all the dialogue, and there are no essential sound cues.