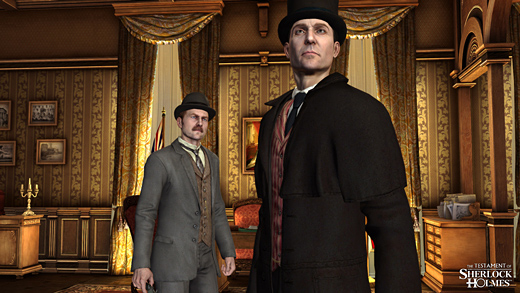 WTF You control… a dog?

As Red Johnson: One Against All recently demonstrated, creating a compelling, adult mystery game around solving puzzles can be an incredibly difficult challenge. It was a pleasure, therefore, to get my hands on Frogwares' The Testament of Sherlock Holmes

. Although not exactly Layton-esque in its construction, it still manages to incorporate puzzles into a mature and interesting story. Like my colleague Brad Gallaway, I found it a pleasure to play, and as a mystery game it's quite good. As an expression of its main character, however, The Testament of Sherlock Holmes disappoints.

Holmes is a complex fellow, and capturing him in a game is no easy task. To cover the full breadth of his abilities, from the violin through chemistry to bare-knuckle boxing, would require considerable creativity in both narrative and mechanical design. To deal with his excesses – the self-starvation, the tobacco, the cocaine—would place even greater strains on the rating system. At the minimum, though, what one hopes to see in a Holmes mystery game is an expression of his extreme attention to detail and careful deduction from observation.

"Is there any point to which you would wish to draw my attention?"

"To the curious incident of the dog in the night-time."

"The dog did nothing in the night-time."

"That was the curious incident," remarked Sherlock Holmes.

The Testament of Sherlock Holmes makes an admirable attempt. A "sixth sense" mechanic allows the player to scan every area for the clues Holmes would notice and other men would miss. The story accurately captures Holmes' arrogant and sometimes devious nature. A "deduction board" gives the player a way to recreate Holmes' reasoning, yet it's here that the game's problems start to show. 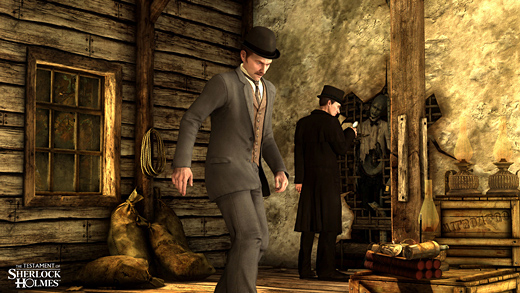 The deduction board puzzles require the player to choose true statements from a short menu of options, but the correct answer often relies on facts not in evidence. At one point the player is forced to conclude that a victim had been given a filled opium pipe, when the facts only suggested that the opium itself had been externally supplied. Worse, the idea that the pipe was pre-loaded isn't actually important, which means that this inaccurate phrasing serves only to obfuscate a clear answer. While this was the most egregious example, imprecise phrasing plagues a number of the deductions.

Paradoxically, the game also at times demands that the player get too much information. One puzzle related to Greek letters can be solved almost instantly with three pieces of information, but four are required. The opium deduction is part of a long train of actions, including cutting an advertising flyer out of a dead man's stomach, undertaken to figure out that the victim got his drugs from the only opium den that's accessible, or even visible, in the whole game world. This doesn't ruin the game, but it whiffs on the efficient, careful deduction that's characteristic of Holmes.

This imprecision extends to the game's story. The mistakes range from minor errors like Holmes misdentifying the stains on an index card moments after they served as the crux of a deduction, to abandoning whole plotlines that involve multiple puzzles, locations, and deaths, like the Bishop's nephew. Similarly, the journalist, a major factor in the early part of the story, is forgotten entirely. Nonsense Watson takes a completely inexplicable trip to the sewers, notices a floating dead body without apparent concern, and casually guns down two men from behind, without any apparent moral crisis. Then there is the useless and visually awful frame story.

All these plot elements seem to be haphazardly jammed together, as if several different drafts of the story were pieced together at the last moment without editing. When an apparently important character got introduced in the final few seconds, I merely shrugged. By that point, I wasn't expecting the narrative to cohere. Even the story's best trick, making the player question Holmes' motives, disengages the player from the actual confrontation going on, one that any Holmes fan would love to play.

That's a shame, because The Testament of Sherlock Holmes

does an otherwise fine job of making a puzzle-based mystery mature and interesting. The puzzles and their solutions mostly make sense in the world of the game, and with the exception of its absurd dog segment, the game stays admirably grounded. The careless, illogical flow of the story and the deductions that underpin it, however, seriously undermines the idea that this is a game about being Sherlock Holmes. The Testament of Sherlock Holmes's execution is ordinary, and its flaws elementary. Rating: 6.5 out of 10.


Disclosures: This game was obtained via retail purchase and reviewed on the PS3. Approximately nine hours of play was devoted to single-player modes (completed once).

What is apparent in this game is the sense of achievement garnered through seriously thinking some of the puzzles through, providing you don’t skip them. It always annoys me these days when developers allow you to completely skip puzzles… The build-up of excitement of games such as Broken Sword will be lost on an entire generation through this hand-holding approach.