Alone in a Crowd 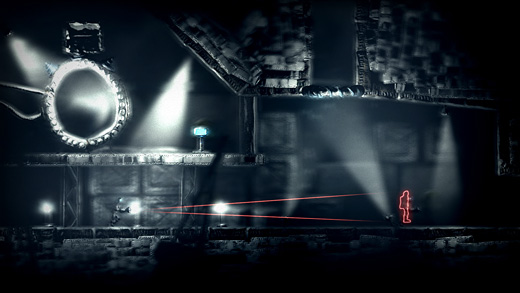 HIGH Figuring out how to get the last orb in Planet Survey.

LOW Getting stuck on a puzzle for 15 minutes because I forgot it's possible to merge oppositely-oriented clones.

WTF Hitting a gravity pad too hard, dying, and then watching my corpse ping-pong back and forth until I reloaded.

The nameless protagonist of The Swapper has four people with her, but she's all alone.

Her companions are clones, mindless and seemingly soulless. She can swap her consciousness freely between the five bodies, but she still won't have anyone to talk to until she finds the person—or people —who ejected her from Space Station Theseus under mysterious circumstances. The Swapper parlays this strange idea into an excellent atmospheric puzzler.

The Swapper pairs its disorienting premise with a distinctive look based on images derived from real objects. The use of clay and other materials to generate the landscape of the game imparts an interesting sense of physicality. At the same time, the limited animations, crudeness of certain objects, and the sometimes strange scale of the world relative to the character make the proceedings feel eerie and unreal. The effect is spellbinding throughout, even though the escape capsule that carries the protagonist to the lifeless surface of a planet in the game's opening moments is recognizably made from a tin can.

After the protagonist finds the device that gives the game its name, she can create clones of herself and swap her mind (or maybe her soul) between them. Although a long fall will kill the protagonist and she can't jump very high, the swapper takes over these roles. For example, a body that tumbles off a ledge will still die, but she can survive by swapping into a new clone standing on the ground. She can ascend by creating a new clone in midair, swapping into it, and then repeating the trick until she reaches her destination. (The game makes this easier for the player by slowing time significantly whenever she starts to make a clone.)

The abandoned clones die, of course, air hissing out of their spacesuits as they lay broken by the descent, but one does what one must to survive.

The protagonist soon finds her way back to the orbiting, derelict space station. To find out the truth behind the unknown person moving through the station, the voices heard over the intercom, and the strange rocks that seem to have been left everywhere, she must retrieve security orbs that have been tucked away throughout the facility. Naturally, these are protected by elaborate security systems that can only be overcome through the use of the swapper.

Although the game introduces a few wrinkles such as fields that prevent cloning, swapping (or both) and panels that invert gravity, the fundamental suite of abilities never changes. Neither the swapper nor the protagonist ever gain additional powers, and the absence of an ability progression contributes to The Swapper's smooth and gentle difficulty curve.

Without ever falling into Portal's habit of presenting puzzles that are obviously intended to establish each independent facet of operating the signature device, The Swapper slowly elaborates on in its core ideas. The going never really gets tough, and while I did get stuck briefly in a few spots, it was always because I had forgotten something that made a solution obvious. My frustration was minimized, but the downside was that I never felt like my intelligence and creativity had been tested. The Swapper has many puzzles with elegant and pleasing solutions, but none that provided a feeling of wonder, or newly unlocked possibilities.

Despite that weakness, The Swapper is a great, haunting game that is to a large extent about wrestling with the spiritual and ethical implications of its central mechanics. Though it does not exhaustively explore those topics or the possibilities of the mechanics themselves, The Swapper feels like a complete thought, and it chooses the right moment to ask the player their opinion on the subject. It's no epic, but The Swapper is a satisfying morsel of a game, well worth playing. Rating: 8.5 out of 10


Disclosures: This game was obtained via publisher and reviewed on a home-built Windows 7 PC equipped with an Intel i7 processor, 8 GB RAM, and a single Radeon 6800-series graphics card. Approximately seven hours of play was devoted to single-player modes, and the game was completed twice.

Parents: As of press time, this game has not been rated by the ESRB. The game contains violence. The core action of the game involves swapping souls between cloned bodies and sacrificing those bodies that don't have a soul at the moment. Some people may find the religious and ethical implications troubling. Despite the constant presence of death, there's no gore and the game, though creepy, is not frightening. Accordingly, I would rate it "E10."

Deaf & Hard of Hearing: Hard-of-hearing players should have no difficulty, as the game has no sound cues and all dialogue is subtitled. Colorblind players may have some trouble, as it is important to be able to distinguish between blue, red, and magenta backgrounds. Trial-and-error will eventually make it clear what the player is dealing with, but an extra investment of time and effort will be required.