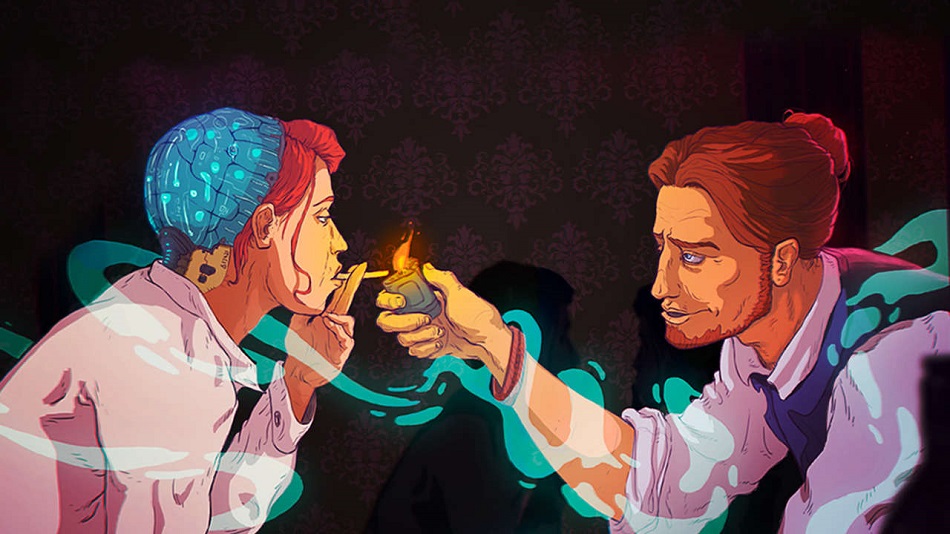 HIGH The whole encounter with Larissa.

LOW A character dying because a safe-sounding dialogue option wasn’t.

WTF These cocktails might be better if they contained something else besides hard liquor.

Some time ago, almost every app on my “Smart TV” was deleted automatically by the TV itself because they were obsolete.

The app lineup had been part of the reason I bought the thing and put up with annoyances like my TV not working because it lost contact with its DNS, but my opinion about the deletions was not asked and I had, after all, agreed to an End-User License Agreement. Perhaps I would have been more careful about the license terms if I were getting a “smart knee” or a “smart spinal cord” lest I find myself suddenly unable to access the “walking” app.

The implications of a situation like that are the basis of The Red Strings Club — a strong, interesting experience that suffers for forcing the player to spend energy in fruitless ways.

I criticized Deconstructeam’s previous effort, Gods Will Be Watching, for falling short of its intended emotional impact by being too difficult and toy-like. The Red Strings Club manages to succeed where that earlier attempt faltered by being clearer about its stakes and gentler about failure.

One of the smart choices Deconstructeam makes here is having one of the protagonists die in its opening moments. This immediately establishes that The Red Strings Club isn’t about succeeding at challenges, but rather working out how a story already unfolded. This focuses play on exploration, rather than strictly aiming for “success”.

A lot of that exploration is oriented towards how the concepts of identity and ownership change in the context of advanced technology, biohacking, and EULAs. The cyberpunk themes and plot center on a technology that attenuates negative emotions and can spread through activation of an individual’s mirror neurons. In animals these neurons play a role in mimicry. In humans, it’s possible that they’re responsible for our ability to understand other’s thoughts and intentions, and may even represent the physiological basis of empathy.The Red Strings Club deals fairly well with discussing the philosophical implications of such technology, the danger of letting anyone control such a thing, and the naïve enthusiasm of the people that create it. 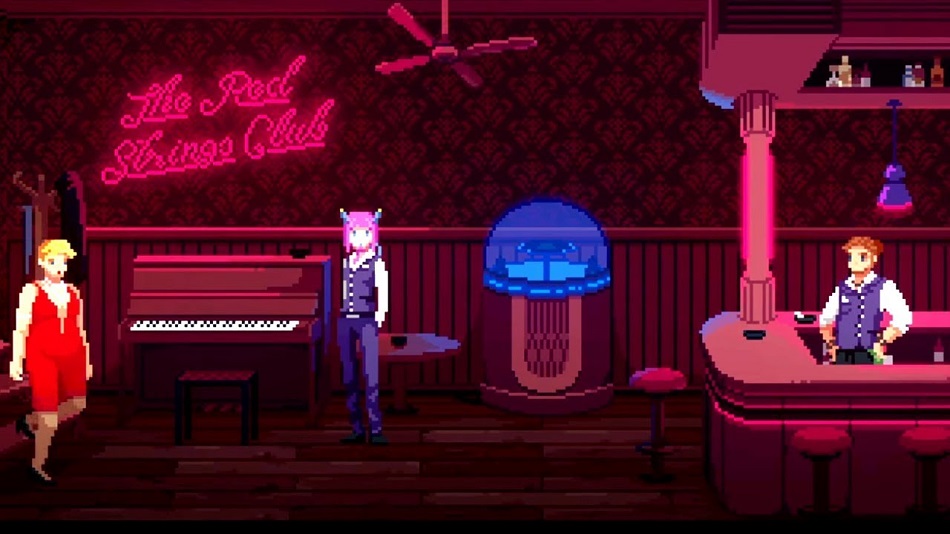 This all comes out because the bulk of the experience revolves around dialogue. Most commonly, the eponymous club’s bartender, Donovan, must make a drink that accentuates particular emotions in a customer. Then, he must choose the right line to speak that will connect to that emotion and dig up some desired information. A similar need to read people and understand what they want to hear informs the segments that star the club’s piano player, a hacker named Brandeis. If mirror neurons really are responsible for emotional insight, The Red Strings Club is activating them even as it ruminates on the implications of technology that manipulates them.

It’s an effective approach. In a relatively short runtime, The Red Strings Club cultivates a strong sense of affection for not only its main characters but also several of the supporting ones. Every character, no matter how inconsequential, has a personality that shows through in even brief interactions. Although the story’s plot revolves around high-concept cyberpunk elements, the careful writing grounds it in the characters and their relationships. These lend the game’s final moments unexpected heft, even though the outcome has been revealed from the beginning.

When it gets away from dialogue, unfortunately, The Red Strings Club can feel fairly rough. An awkward early segment calls on the player to use the mouse to simulate a lathe, clicking to accelerate the turning of the lathe while moving the mouse to shape an object. Worse, it called for me to invest a comparatively large amount of time and attention to an activity that wasn’t the crux of, or even really all that important to, the scene in which it occurred.

At least bartending has relevance to the scenes where it happens, but it still feels like the focus of the activity is misplaced. The Red Strings Club calls on the player to mix various liquors like vodka, absinthe, bourbon, and tequila (which sounds like a recipe for a night spent staring into a toilet bowl) to activate parts of a customer’s psyche. To do it well, one must pour booze into a glass by clicking and dragging the mouse.

Unfortunately, this system doesn’t give the player the cues that make pouring relatively simple in life — the heft of the bottle, the shifting of its weight, seeing the liquid move within it. Without them, the act becomes unnecessarily twitchy and requires an inordinate amount of attention. That would be fine if the act of pouring were important to The Red Strings Club, but it’s really much less relevant than making the right drink. The mechanics end up directing the player’s mental energy into something pointless.

The underwhelming mouse-based elements are frustrating because they’re so unnecessary when compared to the interesting stuff going on with the characters and concepts. When it acts more like a visual novel, The Red Strings Club work crackles with lively ideas and compelling characters. Had it focused on that and pared away the irrelevancies, The Red Strings Club would be the amazing experience that it almost was. Rating: 8.5 out of 10

Disclosures: This game is developed by Deconstructeam and published by Devolver Digital. It is currently available on PC via Steam Humble Store, and GoG, as well as Mac and Linux. This copy of the game was provided by the publisher and reviewed on a home-built Windows X PC equipped with an Intel i7 processor, 8 GB RAM, and a single Radeon R9 270X graphics card. Approximately 4 hours of play were devoted to the single-player mode, and the game was completed. There are no multiplayer modes.

Parents: As of press time this game has not been rated by the ESRB. The game contains blood, nudity, sexual themes, strong language, use of alcohol, and violence. Thematically it covers territory that is likely to be a bit above the level of most children. I would probably rate this title T if asked.

Deaf & Hard of Hearing Gamers: All dialogue is represented by text and the game has no essential sound cues. This should be no problem, and I would say that it is fully accessible.

Remappable Controls: The game’s controls are not remappable but the only relevant control is pointing, clicking, and holding with the mouse. Some fine control is required at various points, including simultaneous clicking and pointer movement, however, there is no real cost for failure. Most of the game consists of choosing dialogue options with no timer.

Colorblind Modes: There are no colorblind modes available in the options. Color distinctions are helpful at a few points in the game, so colorblind individuals may find the game more difficult than intended.