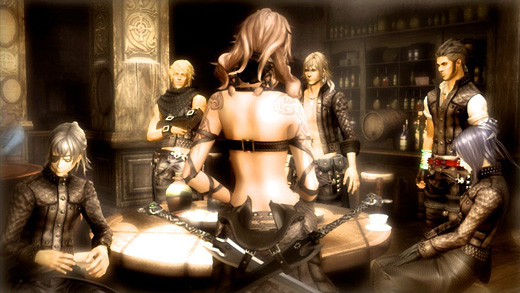 Spoiler Alert: This article contains spoilers for The Last Story.

The best-regarded cinematic games of today owe much of their structure to the currently-derided Japanese role-playing game (JRPG). For all that players heaped scorn on the running-in-tubes gameplay of Final Fantasy XIII, it shared with the Uncharted games the feature that the player's task was to kill his way from one cutscene to the next. Drake's murder habit may be dissonant with his good-guy storylines, but is it really worse than the total dissociation of killing dozens of lizard-men between lovingly animated scenes of teen romance? Of course, this isn't such a huge problem when the plot of the game boils down to "the world is full of monsters and you must kill the Monster King". Plots and themes that go deeper than this raw scenario, however, can benefit from actually interacting with the combat in some way, as I was recently reminded while playing The Last Story.

The best way to solve this problem is to actually work the theme or story into the mechanics of combat somehow. Xenoblade Chronicles is one of the rare examples, as its themes of friendship and cooperation are reflected in the benefits and growth of character relationships in battle. The producer-style mechanics of Persona 3, which allowed the player to suggest but not command, also resonated with many of the themes in its social link subplots. There are also many games where certain fights have unique mechanics that reflect story events at that moment, such as the fight against the Aeons at the end of Final Fantasy X. Broadly speaking, though, examples like this are rare even though many RPGs (e.g. The World Ends With You) successful integrate their themes into their progression systems.

An alternative is to incorporate the plot into the battles through the choice of opponents. Done properly, this can significantly reinforce the player's emotional involvement in boss fights. Final Fantasy X does a masterful job of this, laying out the corruption of its central church before sending you off to kill its gods, as well as building the tension between Tidus and his absent father up until it is let out in a cathartic battle in the game's denouement, to say nothing of the ongoing conflict against Seymour. This goes beyond the simple "Monster King" plot incorporation, because it uses bosses as a symbol of abstract institutions and emotional challenges that the player can then confront and defeat alongside the main character.

This can be an important point, because RPGs that present systems as the enemy have trouble resolving that conflict in gameplay without introducing spot mechanics or QTEs that annoy rather than involve the player. Generally they don't do even this, but instead punt the action into a cutscene. Games like Tales of Vesperia are the result, where the main character fights social evils in cinematics but the player can do nothing. Instead, many of the bosses in that game were allies who had to die in order to serve the convoluted magibabble plot that is typical of Tales games. More recently, The Last Story flubbed spectacularly in a similar way. 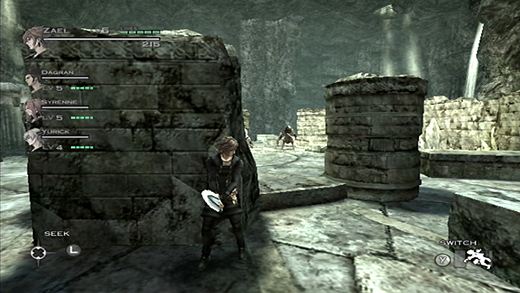 Zael, the main character of The Last Story, has always wanted to be a knight, part of the ruling elite of the empire where he lives. Early in the game, he falls in love with a woman far above his station, giving him even more reason to desire a high social rank. As the plot progresses, however, it becomes clear that his society's ruling elite are arrogant, selfish, and brutal, undeserving of their exalted position. Eventually Zael chooses not to become a knight, and denounces his would-be patron, the Earl, in a cutscene. The player, however, never gets to reject knighthood as Zael does—quite the opposite, in fact.

Zael spends most of the early game performing missions for the Earl with the explicit intention of becoming a knight on the strength of his service. Zael's job—and the player's—is to fight for the Earl, and both do this. After Zael's rejection, however, the player is still serving the Earl. Immediately after Zael's climactic cutscene, the player takes control of another character to escort the Earl so he can attack his enemies. The player takes control of Zael again only after Zael agrees to help the Earl repel an attack on his castle. Shortly after this, the Earl dies (in a cutscene). As a result, the player never gets the chance to act in opposition to the Earl's rule, much less the broader aristocratic system.

The only representative of society Zael gets to confront is the unhinged noble Jarill, whose manipulations of the feudal legal system were part of the early demonstrations of the evils of nobility. This is part of a personal feud between the two that would serve to obscure other themes even if Jarill were a good symbol. However, by the time Zael and Jarill face off in a character-inappropriate boss fight, Jarill has already been destroyed by the same system he had been manipulating earlier. At that point, he is a somewhat pathetic victim, hardly an embodiment of the empire's social ills.

The Last Story requires the player to fight to join the nobility, but denies the player a chance to fight his way out, or even to fight for changes in that noble caste. The game's battles aren't completely dissociated from its plot, but ultimately the player's actions have almost nothing to do with Zael's essential moments of determination and growth. Designing a game this way creates a gap between player action and thematic thrust that ultimately leaves the boss battles it actually provides feeling emotionless and perfunctory. That's not The Last Story's only problem, but it's one that illustrates just how regressive the game's design is, despite its MMO trappings.

Interesting commentary as usual from Sparky, but isn’t this article full of heavy spoilers? Note haven’t played the game yet, but it sure seems like it is.

This article appears to have massive spoilers for The Last Story without any kind of warning. Thanks for that.