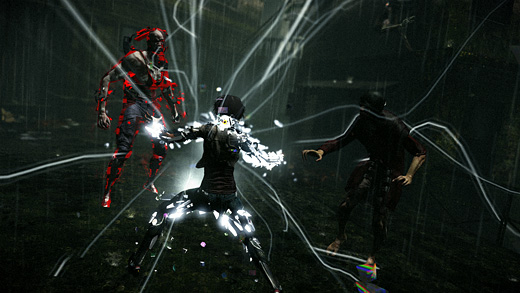 In the wake of Microsoft's unpopular and ultimately reversed turn towards invasive DRM and daily activation requirements, there has been a renewed discussion of the economic challenges of AAA development and the supposed danger that used games posed to the industry. The standard excuse that it's too great a challenge to create games that achieve players' graphical expectations while still selling enough games to be economically viable in the context of a console exclusive has been trotted out, and as usual it is false, or at least lacking in perspective. Cinematic action games (including several that are PS3 exclusives) have steep graphical demands, but the best games in this genre actually come from the previous generation. Games like Ico and Prince of Persia: The Sands of Time illustrate the fact that smart design trumps graphical fidelity, even in the games that most closely mimic film.

This point is hammered home by Remember Me, a recent game that clearly belongs to the genre. Remember Me spreads out its brawls with traversal sequences, employs a cinematic camera, and uses the same kind of character-focused storytelling that drives other exemplars of the cinematic action style. Unfortunately, it fails to be an engaging experience despite its skillful execution of a striking visual design. Remember Me's failures have nothing to do with its graphics and everything to do with the design of the interface, the levels, and the game itself.

Like many cinematic action games, Remember Me spaces its combat moments out with platforming-style traversals. Formally these are very similar to the singular pathways found in the Uncharted series, but there are several critical differences. While in Drake's adventures climbable surfaces tend to be denoted by bright colors (white and yellow primarily), Remember Me has no visual offset inherent to the surfaces themselves. Instead, an orange indicator, diegetically incorporated as a signal from a cranial implant, appears near surfaces that Nilin can climb on. It's explained that these symbols represent the route to her destination, although the indicators sometimes also lead to dead ends that contain collectibles. Even if a surface looks climbable, unless it has an indicator, Nilin won't, can't climb on it. The player's route from one point to the next is completely set, to the exclusion of even the false starts and dead ends occasionally present in Uncharted.

The advantage of this system, although Remember Me does not do well with it, is that in principle the player's position at every point along the traversal is known and therefore the path and indicators can be tuned so the player is never in doubt about how to proceed. The downside is that it perversely lays bare the game-ness of the system, something cinematic action games strive to avoid. It seems that an athletic character like Nilin should be able to climb up some of these fences and vault over tables, etc., but the traversal system makes this impossible. The world lies behind unbreakable glass walls until it's time for Nilin to climb along the prescribed path. This confronts the player with the restriction and artificiality of the system, emphasizing that Nilin is a construct in a game, not a digital actor that the player physically controls. 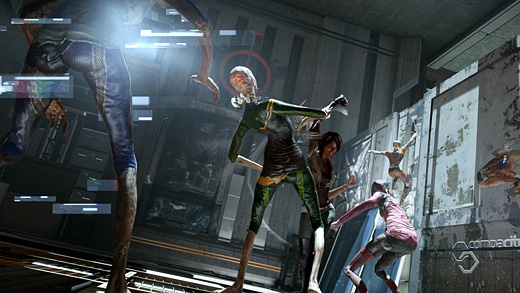 The game also reveals itself to the player in the design of the levels. The traversals in Remember Me tend to be linear and often involve tight quarters with vast gulfs yawning underneath. Because these tight spaces are not a good fit for the game's acrobatic combat (much less its camera), the game is almost devoid of bridging encounters. The game's fights need large open areas; consequently, entering one of these almost always signifies an imminent battle. Admittedly this is a problem for many cinematic action games, but in general entries in the genre at least attempt to disguise their battle spaces by filling them with chest-high objects that have some apparent function in the context of the area's visuals. Because Remember Me is a brawler, and furthermore because it is committed to only letting Nilin interact with predesignated hardpoints within the world (she can vault over her enemies but not a table), it is compelled to stage its battles in fairly large, open areas devoid of contextualizing objects. The battle system simply won't function if there are obstacles, and as a consequence the areas where combat is about to occur are, on the whole, extremely obvious.

Combo-driven brawlers offer a unique opportunity for seamless interface design, because they don't require targeting reticules or snap-to aiming. Combat therefore could have been a place where Remember Me really pushed itself ahead of its genre siblings. The visual design of the battles, with Nilin's artful punches and kicks and acrobatic dodges and flips, does the job, showing the benefit of Dontnod's strong animation work. However, for reasons that aren't clear, the interface prominently displays a combo progress meter with every strike. Early in the game this can be helpful to teach the player how the timing of the combo system works, but there's no reason why it couldn't have been restricted to a "training mode" display of some kind, however. In play, the combo progress meter is distracting, constantly emphasizing that the player is playing a game rather than physically engaging with a digital world.

The exclamation point appearing over enemies that are just about to attack also breaks from the cinematic realism that is the hallmark of the genre. Moreover, it's symbolic of an additional problem, which I always think of as "single-ninja disease." Nilin often fights in a crowd of enemies, but rarely has to deal with more than one at a time. Of course, this is a trope that originates from martial arts films, so it might seem like a small problem in the context of a cinematic game. However, film's ability to change the width and focus of the shot allows it to deal gracefully with the absurdity of an army of enemies attacking a hero one at a time, by turning each mini-encounter into a small, intimate duel. In a game, where a wide shot is obligatory, the shuffling mass of foes becomes a constant and all-too-obvious presence. The constraints of the ludic camera interfere with the cinematic intention, and again reveal the bones of an inadequate simulation.

I don't want to say that these design missteps are "immersion-breaking" because immersion isn't really a goal of the genre Remember Me seems to belong to. Rather, the cinematic action genre aspires to make systems as invisible as possible in order to engage the player as closely as possible with the characters and their stories. Remember Me, however, shows its hand too plainly, not for a lack of pixels or polygons, but because its fundamental design interferes with the cinematic illusion. The staggering investment in ever-more-powerful hardware and graphical engines cannot solve the fundamental problems of engagement, even among the kinds of games for which realistic rendering would appear to be most necessary. Even in the cinematic action genre, design trumps visuals. Remember that.

I wasn’t aware of ANOTHER U-turn by Microsoft on this. I can’t seem to find it either! can you post a link?