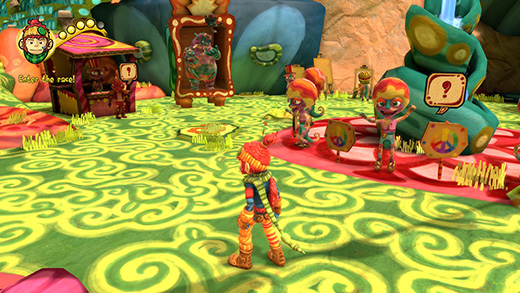 HIGH Zipping along the cargo rails near the Windmill.

LOW The drawn-out turret battle against the giant squid.

WTF How did this suddenly turn into CSI: Colortown?

In Tinkerworld, anything imaginable can be made real with just paper, glue, and paint. However, Colortown, where the all-important paint gets made, is in danger of falling apart. In The Last Tinker: City of Colors, a gifted young monkey boy named Koru will use his creativity to produce wondrous new items that will save his home, and maybe the world.

It's a lovely game about punching things, though. Colortown is as vibrant and varied as its name suggests, and looks exceptionally beautiful even in areas that are dominated by a single tone. In keeping with the premise, almost everything has a delightful papercraft appearance, including the speech bubbles. The Last Tinker almost always has something on screen worth examining, and a score that almost perfectly complements every area.

Alas, many of Colortown's inhabitants have fallen in love with just one color and won't have anything to do with the others. As a result, the city falls under attack by "bleakness" that saps the color out of every area, freezes the town's inhabitants, and populates every region with monsters that look like angry lumps of glue. Rather than using his creativity to make tools to save the town, Koru has to obtain special punching powers from "color spirits" in order to save the citizens, teach them the value of diversity, and eventually defeat the source of the bleakness.

These spirits may be the best part of the game. They're charmingly animated and well-written, and their individual journeys (as well as those of the slowly-uniting townsfolk) are entertaining. If the same could be said of the gameplay, Tinker would be a marvel.

The Last Tinker has some platforming of the free-run variety, performed by tilting a stick and pulling a trigger. As in the Assassin's Creed series, this is a blast when traversals focus on creating and preserving momentum, and a drag when they require precision. This approach also makes the platforming feel curiously restrictive. Because the player has no real control of Koru's specific movements, it's impossible to really explore the world. If the developers want Koru to be able to jump to somewhere then he'll jump, otherwise he'll just run off an edge, even if it seems he should be able to cross the gap.

The game starts to thud more heavily when Koru fights. On the ground, Koru moves fairly sluggishly unless lunging or dodging, which is most of what happens when he's brawling. The Last Tinker offers up one all-purpose punching button, with targets selected by the left stick, and an option to dodge. After a few levels Koru also gains a modest ranged attack, but punching constitutes the bulk of the fighting throughout.

As Koru gains the aid of more spirits, he obtains special punches that cause enemies to run away in fear and destroy themselves on nearby spike plants, or become depressed and unable to attack. The much-needed variety these techniques add dramatically improves combat near the end of the game, but the simplistic enemy AI obviates the need for much strategic use of abilities. In puzzles, too, once Koru has most of his powers they start to combine in useful ways that show how interesting the game could have been, but for too much of its length The Last Tinker is far too focused on boring combat.

There are other problems, too.

An extraneous, poorly-done stealth level shows up early, and a later boss fight constitutes the game's sole turret sequence. As is typical of one-off stunts, these elements are not particularly legible and do nothing to improve the overall experience. Even these failures, however, feel conventional and almost pro forma, as if they exist because "make two common game design mistakes" was part of the development document.

There's nothing deeply wrong with The Last Tinker: City of Colors. It's playable, and in places quite enjoyable, but it's so pedestrian in its approach that it's a disappointment. In a world where the inhabitants can create literally anything from art, all the player can do is "free" run in the places the developers want him to and brawl with angry glue monsters. It's a shame that the game emphasizes the value of creativity, swarms with charming characters, and sports a vibrant, engaging look while so completely lacking those qualities in its design.

The Last Tinker takes a few moments here and there to set up a sequel. If it comes, here's hoping it's more about creativity and exploration and less about punching. Rating: 6 out of 10


Disclosures: This game was obtained via publisher and reviewed on the a home-built Windows PC equipped with an Intel i7 processor, 8 GB RAM, and a single Radeon 6800 HD series graphics card. Approximately 8 hours of play was devoted to single-player modes using a controller and the game was completed.

Parents: As of press time this game has not been rated by the ESRB. The Last Tinker contains fantasy violence and little else that would be of concern. The Last Tinker values working together, valuing diversity, and being curious, resilient, and active. The world is bright and colorful in most places, and the game has no scary moments. Accordingly I would rate it E, with the caveat that most of the game is about Koru punching things.

Deaf, Hard of Hearing, and Colorblind: All of the dialogue in the game is in the form of text so you shouldn't have any problem there. However, there is one level that changes in time to the beat of music and may be harder to play through without it. Additionally some puzzles in the same area are entirely dependent on sound and will have to be approached using trial-and-error. The game has a colorblind mode available, although I can't attest to whether it makes the game more playable.