The Last Tinker: City of Colors is an upcoming Unity-based action-adventure from Munich-based Mimimi Productions, starring a monkey-boy named Kuro and his piñata-like pal Tap. Kuro will be free-running and fighting through a city where art becomes real, in hopes of saving it.

As the subtitle might suggest, the world of The Last Tinker is bright and colorful, and lovely to look at. The character designs are generally quite good, and a lot of the world has a "made of cardboard" aesthetic that's used effectively. The conceit of the game is that its world is one in which things made out of paper and paint actually become what they look like, and this influences the look significantly (mostly for the better). This early level was fairly polychromatic, but screenshots from later areas suggest that some of them will be dominated by a single color. This makes sense, as the game seems to be a tolerance fable involving different parts of the city choosing one color over others. 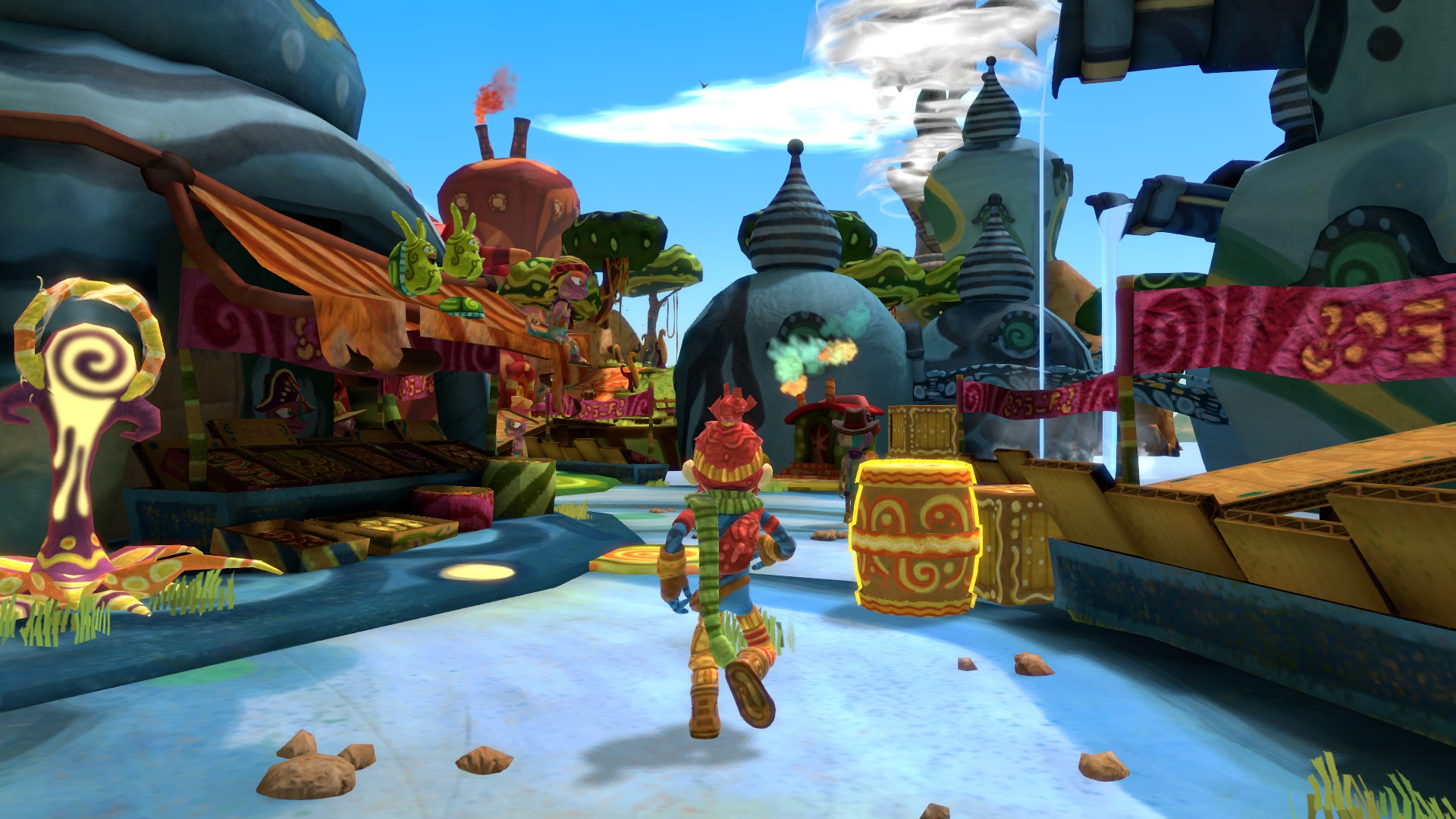 The game is clearly looking towards a younger audience, which shows through in the somewhat cutesy world, a custom difficulty setting, and also in the control scheme. For platforming, The Last Tinker uses a free-run concept fairly similar to Assassin's Creed. Pulling a trigger on the controller causes Kuro to jump if he's near something he can jump to, or climb certain surfaces, without much need for careful timing. While this certainly will make the game fairly accessible I didn't feel convinced of its advantages in the demo segment I played.

One typical advantage of this one-button free-running is that it allows for a sense of momentum without specificity, but Kuro often feels like he's moving sluggishly, especially in a little race that took up the last bit of the demo. The exception was when he got to move around on "cargo rails" reminiscent of BioShock Infinite's skylines or riding power lines in inFAMOUS. Whizzing through the level on these produced some nice moments. 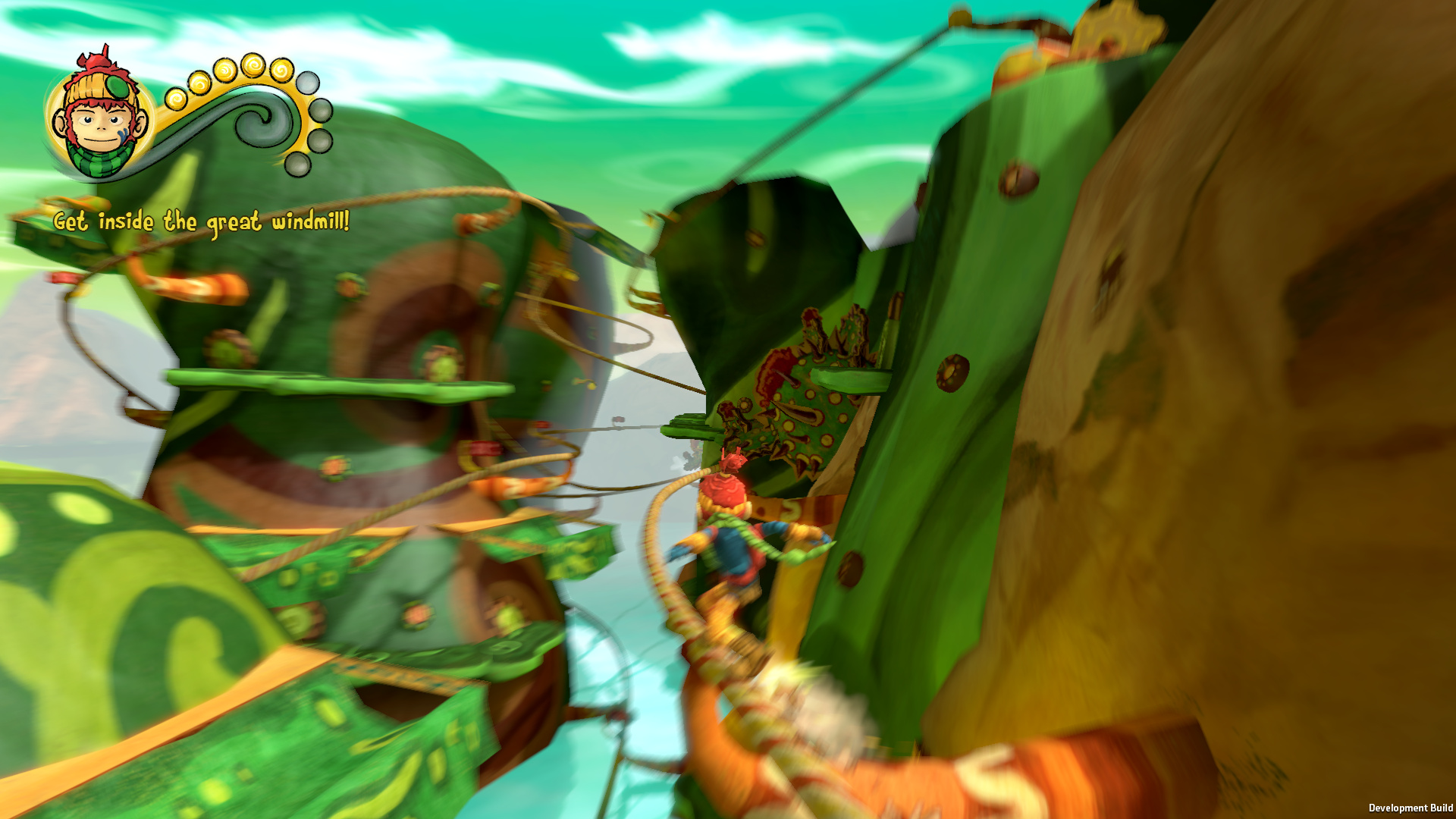 The game also has some combo-driven brawling, which honestly I could have lived without. There was nothing wrong with it, really, but punching lizards in the face seemed like kind of a boring thing to do. It didn't help that this demo level essentially sections off fights into special events. They felt compartmentalized and separate from the experience, as opposed to the platforming which seemed much more to be a natural part of the world. If later levels incorporate fights more seamlessly the punching might seem more fun, especially since it has some nice animation and snappy movement.

The game is also apparently intended to have a puzzle-solving aspect, but this didn't really show up in the level that I played so I can't speak to it.

As mentioned, The Last Tinker has multiple difficulty levels, one of which is specifically geared towards kids. I couldn't really feel a huge difference in the way the game played when I changed difficulty, which may be because this is such an early level or because it was mostly applying to the combat, of which there was relatively little. Due to the simplicity of the platforming and combat I felt even the normal difficulty was on the low end.

The key features I took from this demo were engaging visuals and high accessibility. The Last Tinker has a really inviting look and shouldn't be too hard for anyone to pick up and play. Unless it mixes its gameplay up a bit, however, experienced platforming fans may not find it satisfying.

The Last Tinker: City of Colors is slated for release this summer via Steam (and possibly consoles). The developers provided a demo which I played at home using an Xbox controller on a self-built Windows 7 PC equipped with an Intel i7 processor, 8 GB RAM, and a single Radeon 6800 HD-series graphics card.