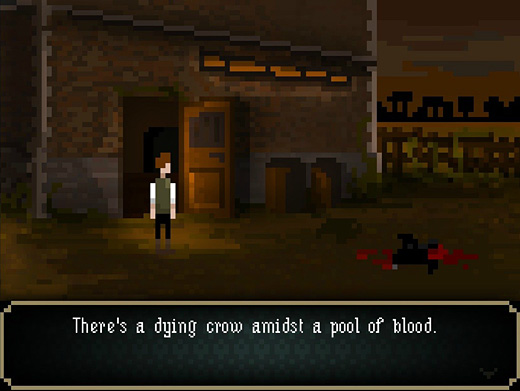 HIGH Almost everything the crows do in the first chapter.

LOW Every moment spent with the wounded crow in my inventory making that awful noise.

WTF So this tiny sparkly thing is in some shallow water underneath a shower, but rather than grab it myself I have to flush it down a drain and catch it at the other end of the pipe with a half-rotted net?

The Last Door, a web-based flash game using a pay-what-you-want model to fund its ongoing chapters, belongs to a recent crop of horror games (Home, Lone Survivor) built on low-resolution pixel art. The inherent ambiguity of this graphical style suits the genre well, particularly when the game is built, as The Last Door is, on a Lovecraftian fear of the sinister unknown. Unfortunately, The Last Door's adherence to dull adventure game construction makes it a chore to play and mutes the horror.

The story in the first two chapters of The Last Door concerns Jeremiah Devitt, a gentleman in Victorian England who gets drawn back into the lives of his boarding-school friends when one of them sends him a strange letter. He's not the only playable character, though: each chapter has a prologue featuring another character hurting or killing himself. These disturbing and disorienting episodes do an admirable job creating an unsettling atmosphere.

The game sustains the tense atmosphere with chapter locations that strike the right balance between normal and wrong—they seem menacing without being explicitly dangerous. Each chapter also has a fair number of jump scares that should keep the player on her toes as long as she keeps solving puzzles steadily, but keeping the pace steady is the problem. The Last Door often throws unnecessary obstacles into the player's path, even when an obvious solution is possible.

In the first chapter, the player can obtain a hammer and observe a freshly plastered wall, but cannot use the one on the other until a cat has been lured into the blocked-off space, which is its own multi-part puzzle. The reason given is that Devitt doesn't want to make a mess, but at this point the player has already pried some boards off a door upstairs, so this seems a strange excuse.

Like the cat and the wall, many of the puzzles in The Last Door are tightly linked together, but in ways that aren't obvious or even sensible. I spent much of my time in both chapters, and especially the second, not knowing what to do or even what to try. This led to a lot of wandering around, trying every item from the inventory on every action point in the environment. This bogged down the pacing, especially in the first chapter where the protagonist's slow walking speed made wandering a serious time investment.

Of course, there's nothing wrong with The Last Door that hasn't been wrong with adventure games generally since the early '90s. The way the scares work in The Last Door, however, is by engrossing the player in the world, so that rapid changes to it can be frightening. A player who's grumbling to herself about obtuse puzzles with inane solutions won't be engaged in the world and will correspondingly be less taken in by the game's attempts to frighten.

That's too bad, because The Last Door's scares work very well and its story, if not hugely original, is at least intriguing. I've enjoyed the Lovecraft-tinged horror and Victorian mystery of the game's first two chapters and look forward to experiencing more of its world. The prospect of dealing with its obtuse puzzle design, however, fills me with the wrong kind of dread. Rating: 6.0 out of 10.


Disclosures: This game was obtained via publisher and reviewed on a PC. Approximately three hours of play was devoted to single-player modes.

Parents: As of press time, this game has not been rated by the ESRB. Although the pixelated look cuts down the gross factor, The Last Door contains a large amount of gruesome content including dead bodies, eyeless cats, and creatures getting eaten alive by birds. In addition, the player must participate in incidents of extreme self-harm, such as suicide and flagellation. Consequently I recommend that parents not allow younger teenagers to play. Especially do not allow children or teens who have expressed suicidal ideation or interest in self-harm to play this game.

Deaf & Hard of Hearing: The Last Door makes an obvious effort to be accessible to many kinds of players. Sounds are occasionally important clues, but the game includes a closed-captioning system to allow hard-of-hearing individuals to play without difficulty. However, the experience is still a bit degraded because sound contributes so much to the game's jump scares. In addition, the game offers a dyslexia-friendly font option.