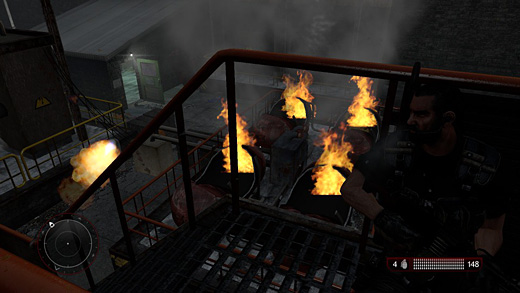 Camp is art that proposes itself seriously, but cannot be taken altogether seriously because it is "too much." — Susan Sontag, "Thoughts on Camp"

When I wrote a post about the Camp aesthetic in games a few years back, I suggested that one of the greatest areas of camp potential in games lay in violence. Specifically, excessively violent or "hardcore" content provided a means by which a seriously-intended game could inadvertently become funny. At that time, a commenter suggested I take a look at Rogue Warrior, a universally-panned game inexplicably starring Mickey Rourke as real-life SEAL team commander Richard "Demo Dick" Marcinko. The game did not disappoint: Rogue Warrior is a great example, perhaps the best example, of a game that in its violent excess becomes unintentionally comic.

Consistent with this position, Rogue Warrior is not a good game, and I don't seriously recommend that you play it. As a first-person shooter with third-person cover elements, it is at least playable despite its general awfulness. It also has the benefit of being very short. As such, it is accessible enough to be experienced and appreciated as camp.

There is also little doubt that the game is intended seriously. The production values aren't as high as they could be, but bringing in an A-lister like Rourke suggests this wasn't always a back-shelf production. Moreover, the story is relatively plausible (compared to, say, the last three Call of Duty games), takes place in real adversary states, and the main character is a real person who was led an actual SEAL team. Although Rogue Warrior is clearly no documentary, these characteristics strongly suggest that the developers meant for their game to be taken seriously, perhaps even viewed as a "realistic" take on immersive shooters.

That's not how things turned out, however, and Sontag's quote gives us insight into how things fall apart. For instance, like many soldiers, Marcinko curses in this game. Prolifically. However, as the following (NSFW) video suggests, he curses too much. The constant deluge of profanity resembles nothing so much as a four-year-old who has just realized that the word "penis" becomes more embarrassing to his parents the louder and more frequently he says it. The cursing, intended no doubt to produce the impression of a hard-edged warrior out for blood, instead diminishes Marcinko, making him seem stupid, small, and laughable.

Something similar happens with the game's "kill moves," knife attacks that Marcinko can use to put down his enemies. Rather than incorporate a knife strike as a simple animation, Rogue Warrior pops out of first-person view so the player can see these elaborate killings in detail. The following runthrough of the game's first level using only these attacks shows a decent sampling, although some of the more extreme ones are missing. These moves, as the video indicates, are often accompanied by Marcinko's unique turns of phrase.

The relatively clear intention here is to appeal to the hardcore violence-lovers in the audience, but these animations are so elaborate, so over-the-top (especially by comparison to the gunplay) that they cannot be taken seriously. One might, understandably, feel repulsed by these moves, but it is difficult to see them as exciting or immersive, especially when Marcinko is barking such gems as "Get dead, fuckbag!"

The final excess of Rogue Warrior lies in its conception of its game world. In line with its relatively sensible plot concept, the game tours some standard locations: apartment complex, factory, docks, power plant. These are all spaces where one could conceivably run into civilians, and where complex sets of objectives might need to be carried out. However, Rogue Warrior has no concept of civilians. Every lowly dock worker in Korea, the game supposes, is armed with a submachine gun, or even an assault rifle. Every person in the game is a combatant, a ripe target for being stabbed in the neck.

As for objectives, Rogue Warrior makes an effort, and even starts Marcinko off in each level with a silenced pistol, as if he's supposed to sneak through using the game's essentially nonexistent stealth mechanics. The player is told he must "recon" and "exfil." Nevertheless, although there are a few places to set bombs, the only real objective in Rogue Warrior is to kill commies until the level ends.

As the game lacks any real antagonist, or indeed much in the way of dialogue beyond some perfunctory radio conversations with a handler, there is no crescendo of plot or action. There is only an endless, numbing succession of Russian and North Korean soldiers to kill. The realization that this faithfully recapitulates an '80s action-movie ethos destroys the game's seriousness, while simultaneously appealing to the camp aesthete's ironic appreciation of dated ideas and expressions.

To the extent that Rogue Warrior is any good, it's good because it's awful. Marcinko's potty mouth, the overly elaborate kill moves, and the reconception of conventional spaces as bristling with the weaponry of a malevolent other conspire to destroy the impression they were meant to create: that Rogue Warrior is a game about what it's like to be a SEAL. Instead the game becomes a caricature of macho, pro-war posturing, impossible to take seriously on any level except, perhaps, as an indictment of the society it was created to entertain. As straight entertainment, it is an appalling failure, but as camp, it is exemplary.