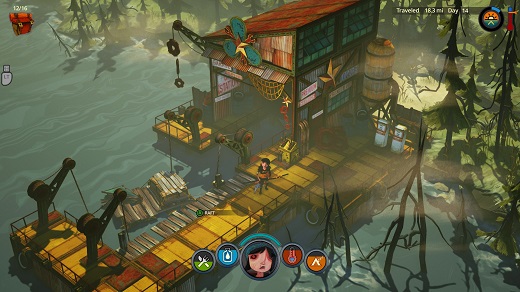 HIGH Maxing out my raft.

LOW Finally that rain ended! Now I can >THUNDERCLAP<

WTF I'm riding a raft down a river and I can't fish?

I confess that I don't care for survival games.

I enjoy exploring game worlds, crafting systems and tech trees, but other characteristics of the genre suck the joy right out. Perma-death, imbalanced random world generation, and constantly-ticking timers turn these adventures into stress factories. In fairness, that means The Flame in the Flood starts off at a disadvantage, but I still found value in it.

The Flame in the Flood is set in an America awash with rising waters, where only a few inhabitants remain. The player avatar, Scout, hangs out at an abandoned campsite, where she's found by a dog dragging a backpack. Thus prodded, Scout heads off down the river of floodwater in a raft that handles so poorly that I was sometimes unable to turn it downstream.

As she travels on the water, Scout can tie up at various types of places: churches, campsites, bits of old towns. At each stop she clears the joint out, builds whatever tools she can, then sets off for the next dock. The kinds of randomized locations Scout will find depend on the character of the "region"—former countryside has lots of wilderness and camps, former towns have shops often loaded with supplies. This is the fundamental structure of the game.

In the campaign, Scout must traverse 10 regions with various objectives that convey a religiously-tinged story, mostly through inference. There's also a survival mode that's open-ended. Permadeath is in both modes, but in the campaign one can elect to have checkpoint saves at the start of each region.

As she travels, Scout has to juggle four meters measuring her hunger, thirst, body temperature, and fatigue. Interestingly, there's no catch-all "health" meter: things like wounds, poisoning, and broken bones instead affect Scout's movement and sometimes drain one of the meters (some injuries enhance fatigue drain, for instance). This sets up the customary trio of competing demands for a survival game: stay alive, gather materials, progress technologically.

Unfortunately, The Flame in the Flood has a rigid low-level progression that constrains the early game tightly and causes it to become unbalanced. Unless the player gets to a campsite with some flint resources, it's impossible to make a knife and a hammer. Without those, the game isn't survivable no matter how many saplings and cattails one finds—although I also regularly found these to be too scarce to support short-term survival. The game also fails to compensate for this problem by increasing the incidence of food items that don't need tools to prepare, like grubs or mulberries.

The Flame in the Flood compounds this brittleness by spawning tough enemies very early; running into a trio of wolves at my second or third stop was a regular occurrence. Because it introduces dangerous enemies so soon, it must also provide tools to fight them. As a result, the game's most powerful trap can be made almost immediately from basic materials, provided one has made a stone knife. This has the effect of compressing the technological arc, especially since Scout can't make any more effective or cheaper weapon with more advanced tools.

Late in the campaign, The Flame in the Flood becomes more flexible. One can, for instance, choose to invest in kitting out Scout's raft with a stove and tent to compensate for the cold, rather than trying to slaughter wolves and bears to make adequately warm clothing. Torches can be used to ward off most animals rather than trying to kill them.

Unfortunately, the options remain fairly constrained even at that point. The rarity of finding edibles means that butchering animals is the only reliable way to obtain food. For some reason there's no way to fish or actively search for things like grubs or nightcrawlers. Also, because late-campaign areas suffer from almost constant rainfall, killing predators for warm clothes is necessary in order to get anything done without risking death from exposure.

The upshot of this design is that The Flame in the Flood starts off being very difficult, then eases up in the midgame while the player exhausts the build tree and heads towards a barren and repetitive endgame. The scramble to survive and constant migration from stop to stop obscure the limitations of the build tree for a while, and thanks to the campaign's definite endpoint that's long enough to keep the game entertaining. The lower campaign difficulty also, I felt, took some steps to compensate for the tightness of the early progression.

The campaign was the saving grace of The Flame in the Flood for me. The light biblical echoes of its story perfectly complement the game's twangy soundtrack, one-way journey structure, and haunted aesthetic. I didn't love it as a survival experience—maybe I couldn't have—but I enjoyed The Flame in the Flood as a tour of a drowning America. Rating: 6 out of 10

Disclosures: This game was obtained via publisher and reviewed on a home built Windows 10 PC equipped with an Intel i7 processor, 8 GB RAM, and a single Radeon R9 270X graphics card. No performance issues were noted running at 1600×900 with max settings and V-sync on. Approximately 16 hours of play was devoted to single-player modes and the campaign mode was completed once.

Parents: According to the ESRB, this game contains violence and blood. In addition to this, the player character can consume alcohol and become "drunk." The player can be attacked by animals and kill them bloodily; animals will also kill and eat other animals. It's not too terrible and I imagine young teens and tweens will be fine.

Deaf & Hard of Hearing: The game has no spoken dialogue and there are no essential sound cues.

Remappable Controls: The game can be played with a controller or mouse & keyboard but controls do not appear to be remappable.