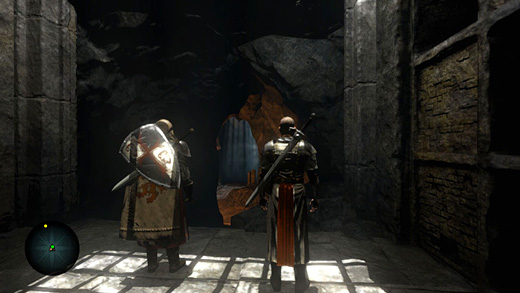 HIGH Siccing the Templars on the Inquisition at Montsegur.

WTF Did the medieval Catholic church have some kind of breeding program to produce these giants?

Peanut butter and jelly sandwiches. Warm, dry socks on a cold day. A movie that's been seen a thousand times and still elicits a laugh… certain things don't need to be fancy or sophisticated in order to be valued. A simple, familiar pleasure can be the most enjoyable thing in the world if it brings a sense of welcome and comfort. The First Templar

may not set the game design world on fire, but there's an undeniable appeal in playing a title that knows what it wants to do, does it earnestly, and does it well… Or at least, well enough.

A straightforward, combat-heavy actioner with fairly linear levels, The First Templar is the sort of game that's been seen a million times before. This tale of a knight and a rogue out to recover the Holy Grail would be entirely too easy to dismiss out of hand in favor of the latest AAA whizbanger, except for the fact that the game has its heart in the right place, and that counts for a lot.

With that in mind, though, let's get this out of the way immediately: The First Templar is a budget title, and although there's nothing game-breaking, it has the usual petty irritations. NPCs can be blocky and poorly meshed, some areas have serious pop-in issues, and the enemy AI occasionally freaks out at long range. The environments are varied and interesting, however, and the game overall has a bright, clean look that feels refreshing rather than simple. Moreover, the fundamentals one might expect to be thoroughly broken in a budget title—ally AI and camera—come off quite well.

The same, alas, cannot be said of the multiplayer. For a game which positioned its cooperative mode so prominently, some of the decisions made were quite bizarre. For example, playing with a partner in splitscreen mode does not allow the second person to sign in with their GamerTag, denying them the opportunity of earning Achievements for their effort. Assigning skills to the second player can only be done from the first player's controller, and splitscreen mode itself wastes a huge amount of the screen on status information that should only take up a small fraction. I was glad to have couch co-op enabled, but it was desperately in need of some tweaking. 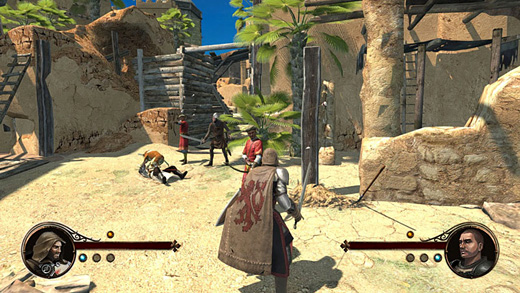 The combat mechanics, by contrast, are reasonably solid, although the animations are rather slowly paced. For characters with swords, this gives a feeling of measured, fluid attacks, but the dagger-wielding character, operating with the same rhythm, feels jerky and somewhat disjointed. All the characters, unfortunately, have fairly limited movesets, which makes the combat somewhat repetitive in long sessions. This is a game that would greatly benefit from an open-ended combo system to increase the variety.

For most of its playtime, however, The First Templar does a good job of changing up what the player is doing, moving between combat, light stealth sections, and traversals of trap-filled ruins. While none of these modes are strong enough to support a game on their own, the constantly shifting focus prevents their individual weaknesses from seriously undermining the game. In fact, the diversity fortifies the design.

What does cause a problem are The First Templar's infrequent "duels" that pit a player character in one-on-one combat against a superior foe. Like many of the game's bosses, the opponents in these duels tend to spam unblockable knockdown attacks. When two players are involved, that's not a problem, but in single combat it's all too easy to get caught in a knockdown loop until death, while the second player is forced to look on helplessly, with nothing to do. Because The First Templar's combat is oriented towards fighting mobs and the game is intrinsically about cooperation, it would have been better off without these fights, even if they do occasionally serve important plot points.

Often a game that tries to do too many things ends up just being a mess, but The First Templar

juggles its various elements with just enough grace to keep the game fresh and enjoyable throughout. This low-fantasy take on the Crusades won't win any awards for originality, but the relatively tight plot, well-conceived twist, and forthright characters exude enough charm to keep the game rolling right up to its somewhat rocky ending. Although it lacks polish, The First Templar makes the most of what it has, and the result is quite respectable. Rating: 6.5 out of 10.


Disclosures: This game was obtained via retail store and reviewed on the Xbox 360. Approximately 14 hours of play was devoted to single-player modes (completed 1 times) and 9 hours of play in multiplayer modes.

Parents: According to the ESRB, this game contains blood, mild language, and violence. The content is pretty much as advertised: there are a fair number of dead bodies and a little blood spatter in some of the animations, but nothing really excessive. Animal lovers note: you will be forced to kill some attack dogs.

Deaf & Hard of Hearing: There are no essential sound cues and all of the dialogue is subtitled (although they're sometimes inconsistent with what's actually said). The game shouldn't pose any problem.

I bought this game (PC version) on recommendation from this review, but it failed to live up to my expectations. It is indeed very linear, meaning you will be running along a very much predetermined path with occasional short side branches. Enemies have very clear attack triggers, so you often see them at a distance standing completely still, until you cross an invisible barrier and they charge at you. Story is fragmented, confusing and motivations are unclear. In other words, this game is sort of like budget FF13, with real time hack and slash battle system and medieval environments and… Read more »