"You're a monster!" Elizabeth says, and Booker doesn't refute her. What would be the point? She's right.

The first moments of Booker's journey through Columbia seem to reveal an idyllic city in the sky, but these scenes only thinly disguise the brutality at the core of its society. Within moments of emerging from his rocket capsule, Booker sees a sign proclaiming that "The seed of the prophet shall sit the throne and drown in flame the mountains of man." Flickering candles, trickling water, and angelic singing soften the blow of the words, but Booker's journey through this chapel culminates with his being drowned in a rather vicious "baptism."

When Booker gets out into the city it seems again a peaceful and welcoming place. The city is having a fair, and everyone is out and about. Yet the statue of the prophet holds a sword, hardly a shepherd's implement, and some of the posters show children armed with guns, an image that will be even more disturbingly recapitulated later at Soldier's Field. Chatting cops show off a vicious-looking device and boast of how they wish they could "bust some Vox skull." Carnival attractions based on shooting the Vox are well-attended, but the high striker and the juggler have no audience. The raffle itself is a contest for the right to be first to pelt an interracial couple with baseballs.

Once that's revealed, violence seemingly explodes out of nowhere, but really it has been present all along, bound up in the fabric of the city. Columbia is a gun pointed at the head of the world, meant to burn that "Sodom below" clean of sin. The man wielding the weapon is Zachary Comstock, whose own wife judges him a "monster." His solution to the problem of worldly sin is very telling. He does not minister; he does not witness. He takes those who will follow him up into the sky and plans to slaughter the rest.

If BioShock is a universe of constants and variables, then one constant is what kind of man walks away from the river in 1890. As Elizabeth and her "mother" both attest, he is a monster. The only difference between them is that Booker sees what he really is, a truth that Comstock rejects.

For Comstock, the waters of baptism transform his past and future atrocities into heroism. The Hall of Heroes explicitly frames the massacre of women and children at Wounded Knee as a triumph over bloodthirsty savages. He also heaps praise on himself for Columbia's intervention in the Boxer Rebellion, a justified punishment for the lies of wicked Chinese nationalists. The propaganda here matches classic American distortions of such events, but it is telling that the Columbians who object to this display do not complain about their false depiction of Comstock's victims. Rather, Cornelius Slate and his compatriots denounce the display because it does not award the real perpetrators of these acts their due credit. They don't contest the righteousness of these murders. 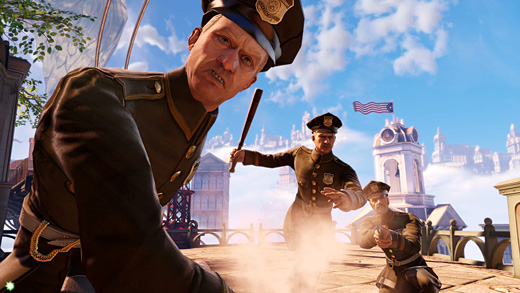 Booker, in contrast, knows the immorality of his deeds, but this hardly makes him an admirable person. Recognizing his sins, he continued to commit them. He left the army to break strikes for the Pinkertons, then found work as a heavy in New York. Killing became his business, so when Elizabeth tries to thank him for saving her, he merely growls, "Job's a job." Booker doesn't fight to protect others, or promote his beliefs. He murders scores of people because he believes that will wipe away his debts. If acknowledging his own evil makes Booker a better man than Comstock, refusing to change it makes him a worse one. The monster is the constant.

Booker has to be this way for BioShock Infinite to earn its closing moments. This is a game that ends with the main character, the player's avatar, getting ingloriously killed by his own daughter. Booker doesn't go out a hero, he dies like a chump, and the measure of how well Infinite's story works on an emotional level is that this seems so natural and right. Part of the reason it goes so well is because the player instinctively understands that there is no third-road alternative. There is no "good" Booker hiding in some corner of the BioShock multiverse. He is always a monster. The player has seen the monster in Comstock, and played the monster in Booker—either way, it always ends in blood.

Infinite has to walk a fine line with this approach, however. The goal is to keep Booker sympathetic enough that the player wants him to succeed, yet unpleasant enough that the player accepts the necessity of his death. In part, the game achieves this by posing his enemies to the player in much the same way that Comstock framed is own opponents. Booker kills the Columbians, but that's okay because they are wicked American racists. Booker kills the Vox, but that's okay because they are bloodthirsty savages. Lest you think I'm stretching the comparison too far, let me remind you that the Vox literally nail the scalps of Columbia's elite to a board.

The player may be taken in by this trick, but Booker is not. When Elizabeth accuses him of being a monster, he doesn't protest that the Columbians are really awful people who deserved what they got. He merely points out that they will fight to recapture her. There's no moral dimension to his killing; a job's a job, is all. His only concern is getting Elizabeth safely out of the city—in which regard making her invulnerable in battle is a shortcoming of the system.

What's unfortunate about Infinite's combat is that it delivers its culminating point in the Hall of Heroes, with about 2/3 of the game left to go. The painted dioramas of Comstock's propaganda, recalling the earlier encounter with the carnival attractions, and the revelations embedded in Slate's ravings provide the last ideas we need in order to understand the game's protagonist and antagonist. It's telling that the fight between the remnants of Slate's men and the founders as Booker emerges from the Hall of Heroes is one of the last times that an encounter structure has any narrative dimension. From here on, the combat has no story to tell, and feels like it's there merely to pass the time while other aspects of the plot wind their way through the game's quantum babble.

The narrative problem with BioShock Infinite's combat, then, is not its existence, or even its degree, but its volume and timing. Violence lies at the heart of Columbia, in both the sharp explosion of its genocidal mission and the slow, grinding brutality of its racial and class oppression. That came to the city through its founder, Comstock. It must find its reflection in his counterpart, Booker. That said, it is not wrong to wish that Infinite were less violent. Recoiling at Booker's deeds is the best possible response to have to them. The player should not be comfortable with the things Booker does, but he needs to understand Booker. He needs to know that Booker is the kind of man for whom bloodshed is the only solution. The violence of BioShock Infinite successfully shows that the monster cannot be washed away. It can only be drowned.