The Second Title of This Review 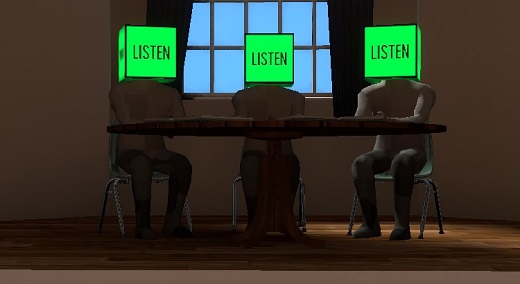 HIGH Reaching the top of "Stairs" under my own power.

WTF The reveal at the end of "Ready, Set, Fish".

The Beginner's Guide is a trap for critics.

Actually it's two traps. The first is this: The Beginner's Guide is fundamentally about the balance between creative intention and player experience in video games. To critics and developers, who represent the core cases for the two sides of this balance, that's a really arresting idea. To others, the question of whether a game truly belongs to its creator or its audience may not excite the mind enough to compensate for the fact that nothing that the player can do in The Beginner's Guide is "fun" or even particularly interesting.

Critics and creators, to whom the game's concepts naturally appeal, thus lose themselves in rapturous praise, while the broader audience stumbles through a few chapters before concluding that the game sucks. And hey, they're not wrong: the games that make up The Beginner's Guide do kind of suck to play. That's part of the point. I can't promise that the concept will interest players enough to make the game tolerable for the two hours needed to get through it.

That brings me to the second trap. For a critic to discuss The Beginner's Guide, he must describe his experience of the game. To do this, however, he must pick a side in its central debate: describing a reaction to a game necessarily centers the player (or a player) in the discussion. It's a clever trap. If you like the game, you can just tell people to buy it. If you don't, well, then you have to talk about your experience, and then aren't you emulating the game's villain?

I have read a few reviews where critics try to bail out of the dilemma by discussing their own personal stories rather than touch on the game directly, but that's just a variant of the same mistake. They're taking The Beginner's Guide and making it all about them.

I don't mean this as condemnation. I stepped in this trap, several times in fact, before describing it to you. Critiquing my own review from within it may be too meta under normal circumstances, but it seems appropriate for this game.

All of these short games seem a bit off from the standpoint of contemporary consumer-oriented game experiences. They have no shooting, no meaningful platforming, and only one real puzzle. The story is mostly conveyed through "Wreden's" self-important lecturing.

As The Beginner's Guide goes on, both "Wreden" and the games themselves make clear that Coda doesn't believe a game needs to be fun or even playable. His purpose in making games is not to communicate with or entertain other people, but just to enjoy making them. His intended audience is himself. Exactly what Coda finds rewarding about creating these particular games never entirely becomes clear, but The Beginner's Guide is a one-sided argument that attempting to know the creator through the work is a trap.

The almost immediately obvious tension between Coda's self-directed creation and the fact that I was actually playing the game develops into a revelation that the player has been party to a serious violation. The way that knowledge is made clear is clever and impactful, but it left a bad taste in my mouth that makes me reluctant to play again.

The epilogue of The Beginner's Guide points to a kind of redemption for its villain, but one that's entirely at odds with the fact that the player is, in fact, actually playing it. Then again, I didn't make the epilogue; Davey Wreden did. Maybe he made it just for himself.

Which "himself", though? Is there any writer who doesn't have the experience of looking back on an older piece with regret or embarrassment, even if she loved it at the time? We are not who we will be; even if I make a work of art for myself, I'm making it for someone I haven't met yet.

As a philosophical rumination on the ownership of art, The Beginner's Guide is what Boswell might call an "ingenious sophistry", but not a compelling argument. As an exploration of an obsessive relationship that failed painfully, it's a sneakily effective success. Is the latter so bound up in the former that it loses impact? I thought not, but that's just me. Rating: 7 out of 10


Disclosures: This game was obtained via retail purchase and reviewed on a home-built PC equipped with an Intel i7 processor, 8 GB RAM, and a single Radeon R9 270X graphics card. Approximately 2 hours of play was devoted to single-player modes and the game was completed.

Parents: As of press time this game has not been rated by the ESRB. It contains no content that is objectionable and I think would therefore be rated E. The subject matter is unlikely to interest your kids, though.

Deaf & Hard of Hearing: All the speech in the story has subtitles and there are no significant audio cues. You should be fine.

I’ve read a lot of commentary about this game and the idea that it’s a trap for critics shows up very often, but I think it’s misguided. As a critic discussing a game (or any creative work, really) there’s a spectrum of topics one can get into: The critic The critic’s experience of the work The work itself The creator’s experience or intent in creating the work The creator The first three are fair game and always have been. Of course I can talk about myself (say, going into my experience with games in the relevant genre, or the events… Read more »

The more I hear about this game, the more I feel that I have to check it out just to see if I can meet the challenge it poses to me as an aspiring critic.