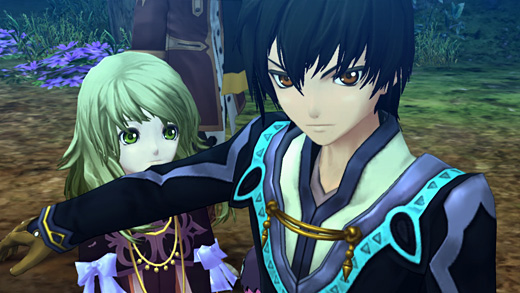 HIGH Milla slamming the gem into the aspyrixis.

LOW Falling out of the arena while punching the last enemy in a coliseum sequence.

WTF An RPG where people actually express concern about the idea of a 12-year-old girl fighting monsters? I thought I'd never see the day.

When I want to wolf down a big potato chip of a game, I turn to Tales. Although this long-running series of Japanese role-playing games (JRPGs) has its moments of pathos, I never come to it expecting a deep, moving story or complex, strategic combat. I come to whack some monsters for experience, watch some goofy skits, and grind a little gold to buy a shiny new sword for the protagonist. The Tales series is my gaming junk food. That's why I picked up Tales of Xillia

, and it didn't disappoint. It did, however, surprise me with nuanced fighting and a well-made story.

Anyone who has played a Tales game before will be familiar with the combat—Xillia continues the series's tradition of chaotic, combo-driven action. Special attacks or spells can be used anywhere in a combo sequence, and the mana pool that powers the specials is replenished through normal attacks. Both kinds of attack are enhanced by linking characters together, extending combos and creating opportunities for new specials. Frantically tapping on the normal attack to build up to a special gives Tales games the feeling of a brawler that's been transmogrified into an RPG.

As always, attacks and dodges are beautifully animated (especially the spells) but the camera sometimes becomes a problem. It can be easy to lose track of the character being played, particularly against large bosses or in visually busy battles. In an effort to clarify the field, non-targeted enemies become transparent if they're in front of the player's character, but this sometimes makes the behavior of the AI-controlled characters confusing, and the battlefield more difficult to interpret.

In some Tales games it has been possible to fight on autopilot, but I found Xillia's system to be among the series's more interesting and complex ones. Even with Jude, the game's most straightforward combat character, there was an unusual degree of nuance and positional control that represents some of the most interesting gameplay in the series.

Outside of combat, Xillia is not quite as strong. The equipment progression is a case in point. Stores gain new merchandise and better prices when the player develops them with materials collected from the environment. While I enjoyed this more than typical RPG stores, the actual process of gathering these materials from random bags and glowing points strewn through the environment is just busywork and eventually grows tiresome. 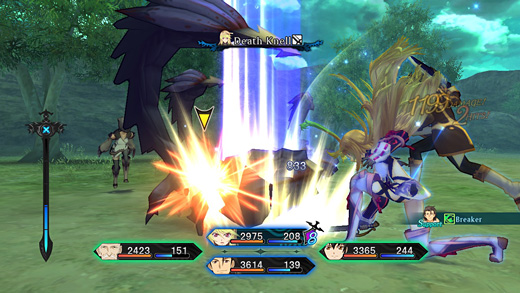 The world design itself is something of a mixed bag. Level design in the dungeons is interesting and varied, although inconsistent save point placement suggests that the developers were not sure how to deal with the game's quick save capability. Unfortunately, the highroads that connect towns and dungeons are a series of barren-feeling canyons. The whole world being ringed with cliffs feels just as silly as it sounds, and I longed for the traditional JRPG overworld design of previous Tales entries like Vesperia.

Xillia also departs from previous Tales games by giving the player limited control over character development with a spiderweb-like system called the "Lilium Orb." Similarly to Final Fantasy XIII's crystarium, the player earns points that can be used to activate nodes in the web—improving strength, magic, HP, etc. Filling in a segment of the web also grants the player a new skill or special attack. While the characters are earning 4 points or so per level this system feels fun and interesting, but as the characters get stronger the number of points they receive drops significantly. As a result, late-game grinding feels dull and somewhat pointless.

The story feels like a highlight reel of classic Tales tropes. Like many of the games in the series, the core plot concerns imbalances in nature caused by human misuse of magic, with familiar Tales ideas like elemental spirits, magic gems that enable combat against monsters, and powerful, alienated young women playing significant roles. Despite largely rolling with series archetypes, most of the main characters and one or two of the villains are surprisingly well-realized.

Unfortunately, Milla comes across as rather one-note, but Jude's blend of idealism, intelligence, and emotional ambivalence makes him one of the series's better protagonists. This seems to have been the development team's feeling as well. Xillia offers the player the option to play as either Jude or Milla, but even in the latter case Xillia remains fundamentally Jude's story. No matter which main character is chosen, the player will eventually play as Jude for at least a while, and he is the witness to all the story's most significant events. His gentle idealism also provides a better foil for the brutal cynicism of the game's ultimate villain than Milla's harsh, driven attitude.

As it goes on, Xillia seems to be less about Jude's intelligence and more about how he is growing up, which is both boring and too on-the-nose about fundamental RPG metaphors. The protagonists endure about three too many deceptions from the charming rogue character to be believable, and the game's tortured efforts to solve its main plot dilemma seem to discard some of the unusually good world-building. For all its flaws, though, the story generally works and generally hits the right emotional notes.

For a game I expected to be a big potato chip, Tales of Xillia

turned out to be surprisingly strong. Although it's loaded with series tropes, Xillia does an unexpectedly solid job of developing its world and its characters. The combat also shows surprising depth, although the secondary systems don't quite measure up. It's not groundbreaking or deep, even in the context of its own series, but Tales of Xillia was engaging and satisfying. Rating: 7.0 out of 10.


Disclosures: This game was obtained via retail purchase and reviewed on the PS3. Approximately 40 hours of play was devoted to single-player modes (completed one time as Jude and about 1/3 as Milla).

Parents: According to the ESRB, this game contains blood, mild language, sexual themes, use of alcohol, violence. Combat does not involve any graphic violence, and the sexual themes refer to a surprisingly large number of innuendos and double entendres, rather than any frank discussion of sexuality. One character wears an absurdly skimpy outfit and the game is not shy about offering panty shots of female characters, including one who appears to be a bit young. Aside from that, the content is probably fine for tweens and up. In one key plot sequence a healthy woman is paralyzed and subsequently, painfully healed. Playing through this plotline could be either beneficial or painful for children who have experienced serious injury or disability—parents should consider the child's emotional readiness for a storyline like this before purchasing.

Deaf & Hard of Hearing: The game does not have any essential sound cues and most of the dialogue is subtitled. The exception is the post-battle conversations—although these almost never contain vital information, many of them are entertaining and their absence is a slight loss.