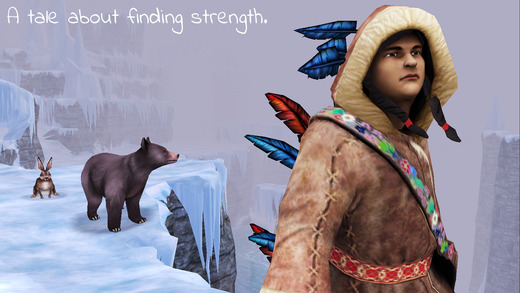 HIGH Reviving a tree and seeing the surrounding area come back to life.

WTF At some points Chiwatin appears to wet his pants.

Spring is an uncertain season. As the first flowers open their petals and the countryside starts to green, each cold day seems like the moment the weather might reverse and head back into winter.

Spirits of Spring, from Papo y Yo developers Minority, takes place in a land caught in a perpetual springtime, one that wavers between lively warmth and a deadly freeze. In this place, spirits gather around flowers. By bringing these spirits to magic trees, an adolescent boy named Chiwatin can renew springtime in parts of the land. Evil, bullying crows want to harm the trees, however, and Spirits of Spring is about Chiwatin's effort to overcome their attack.

Spirits of Spring is not a combat game where Chiwatin fights back against his enemies, though. Most of the game consists of figuring out how to gather enough spirits to bridge a gap or revive a tree. He also gets help from his friends: Rabbit can squirm through burrows, and Bear can swim.

These tasks almost all feel a little too simple, never rising to a moment that requires careful observation or real elegance of thought. This can perhaps be excused because Spirits of Spring isn't trying to say anything through challenge. Here's what Spirits of Spring wants to say:

Bullies are cruel, the things they do have lasting impact, and responding in kind is wrong… And the game gets so close to actually landing the whole statement.

The crows turn the greening landscape cold and icy, harming everyone. The pain and fear they inflict on the animals is excellently conveyed, and the touch of having crow feathers stick to their victims is a clever way of depicting the long-term harm of their actions. The puzzle-solving, light as it is, sharply demonstrates how Chiwatin is strengthened by his friends.

However, the game falters when it introduces "dark spirits" that Chiwatin tries to use to fight back against the crows. It stumbles here because where the game was content to show its other ideas, it stiffly tells us this one.

Chiwatin's friends find these spirits disturbing enough to abandon him, but won't say why. The power helps him fight back against the crows effectively until it's time for the game to make its grand point, and then the powers fail for no reason—there's never a moment where the dark spirits harm one of the spirit trees, or spread winter rather than spring.

Their power is ‘bad', but we know this only because Spirits of Spring says it is, and ultimately this weakness ties back to the simplicity of the game's tasks. Spirits of Spring never poses a challenge strong enough to elicit catharsis through play, and so must fall back on the old trick of relying on the dialogue to sell its ideas.

So much of Spirits of Spring is on-point that the failure to ultimately cross the finish line is a sharp disappointment. I should keep things in perspective, though. Spirits of Spring's design, art, and narrative work so well together in conveying its theme that the strongest complaint I can muster is that it doesn't work perfectly. That's a problem I could stand to have more often. Rating: 8 out of 10


Disclosures: This game was obtained via retail and reviewed on an iPad with Retina display running iOS 8. Approximately 2 hours of play was devoted to single-player modes and the game was completed.

Parents: As of press time this game has not been rated by the ESRB. The game contains fantasy violence but nothing really disturbing. At several points the main character apparently urinates on himself in fear. I would rate it E nonetheless.

Deaf & Hard of Hearing: All dialogue is text and there are no essential sound cues. You're in the clear.

I think “too simple” is the biggest problem with this game – it never delves into a more complex analysis about the problems with bullying and how it can perpetuate a harmful cycle. It just distills the conversation into cheap talking points and expects the audience to view them as profound. Very disappointed with Minority Media.