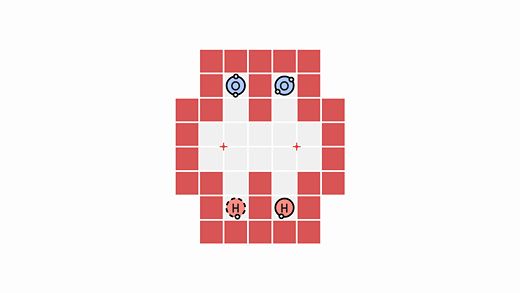 LOW The helium levels feel like irritating obstruction rather than enjoyable challenges.

WTF I suppose I should have guessed that a joke about the atmosphere of Uranus was coming.

Sokobond wants its players to think about chemistry. The objects in its playing field are identified as various elements, its menu is designed to look like the periodic table, and the game takes some time to describe the chemicals the player is constructing after a successful solution. Unfortunately, chemistry is what Sokobond is lacking—although it's a decent puzzler, its various elements never come together to make something memorable.

In Sokobond the player manipulates "atoms" identified as particular elements across a minimalist grid. Atoms can "bond" to one another to form simple molecules. Each atom forms as many bonds as it has visible electrons, and the number of bonds formed corresponds in a general way to the chemical behavior of the element. Carbon likes to form four bonds, oxygen two, and so on. The process used to build up molecules, however, bears no resemblance to actual chemistry.

On a fundamental level, Sokobond's puzzles are about routing. The player controls only one of the atoms on the board, and must move it around so that it runs into the other atoms in the correct order and with the right position to generate the desired molecule. This is a modest challenge in early levels, where only a few inert obstacles block the player's movement.

As the game goes on, Sokobond introduces new wrinkles that increase the complexity and challenge—hotspots that cleave bonds that have already been formed, or rotate them relative to the player-controlled atom. There are also hotspots that increase bond order (turning a single bond into a double bond, for instance), and helium that takes up space without reacting.

As these new possibilities come into play, Sokobond's puzzles become quite challenging, but often not in a way I enjoyed. I particularly disliked the levels built around helium, because these amount to highly-obstructed pushing puzzles, which I found both irritating and boring. That wasn't helped by the game's music; a dull and occasionally discordant background drone clearly intended to be a neutral sound that grated on my nerves after a little while.

The droning music is matched by minimalist graphics—the atoms are circles orbited by little circles, and the playing field is a square grid. It's clean and easy to read, but also not very visually interesting. Worse, by being two-dimensional, these fields discard the essential beauty of chemical geometry. If Sokobond is inspired by chemistry, it's not even inspired by the best part.

Even though it has little to do with real chemistry, Sokobond poses some interesting challenges. It's not especially memorable, but it will supply a few hours of solid puzzling. Rating: 6.0 out of 10.


Disclosures: This game was obtained via publisher and reviewed on a home-built Windows 7 PC equipped with an Intel i7 processor, 8 GB RAM, and a single Radeon 6800 HD-series video card. Approximately four hours of play was devoted to single-player mode, and the game was not completed. Sokobond is available directly from the developers' website and has been submitted for Steam Greenlight.

Parents: As of press time this game has not been rated by the ccording to the ESRB, It doesn't contain any objectionable content that I can identify, but young children may find it frustrating. I would recommend a rating of "E."

Deaf & Hard of Hearing: Nothing to worry about—no dialogue, no sound cues.