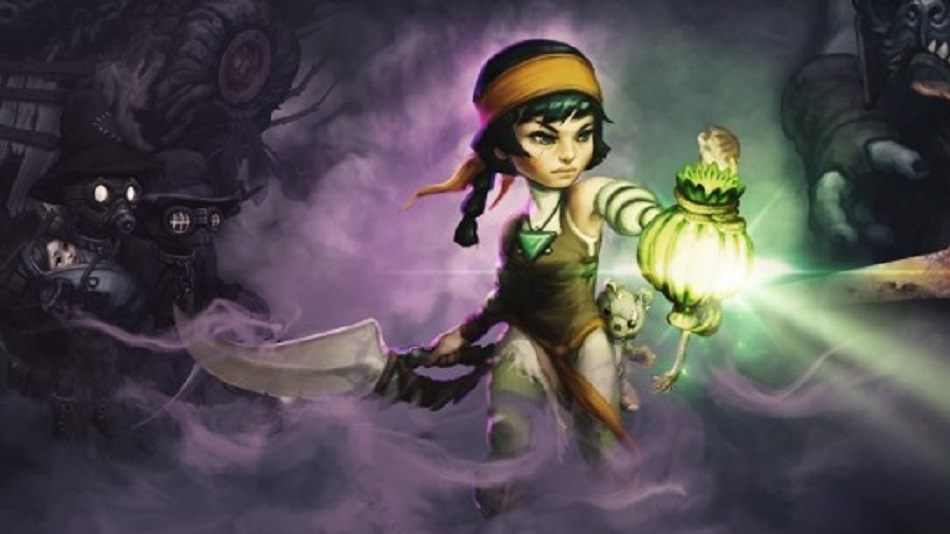 HIGH Finally getting to an environment that isn’t swamp or snow.

LOW The first time I fast-traveled at moderate health and got killed by enemies before the world finished loading.

WTF How does this arrangement of swamp, blazing hot coal fields, and bitterly cold snow zones even exist?

In the first moments of Smoke and Sacrifice, its hero Sachi offers up her son as a sacrifice to the “Sun Tree” that preserves her small settlement from an encroaching ice age. Years later, it transpires that the altar on which Sachi placed her child is actually a portal to a dark and dangerous smoke-polluted underworld that powers the tree. In order to rescue her long-lost son, Sachi will have to gather various resources to craft weapons and armor that will allow her to take down the evil system that has enslaved him.

Despite being locked beneath the earth, the underworld has trees, wildlife and light, for reasons that aren’t clear. By gathering various materials, Sachi can scale up from punching things with her fists to slicing them in half with a chainsaw sword. However, there is an approximate day-night cycle brought on by the titular smoke that fills the underworld, making the ordinary wildlife more aggressive and unleashing ghosts and other monsters. The smoke will also slow Sachi down, so it’s vital to protect her from it by crafting protective gear or standing near a light source.

Smoke and Sacrifice uses an isometric camera with 2-D sprites. It looks absolutely beautiful, and all of the character art is rich in detail and personality. Unfortunately the same cannot be said of the story. Although it’s a nice change of pace from the dad-centric first half of 2018, Smoke and Sacrifice mostly proves that a “mom rescues kidnapped son” plot can be just as perfunctory as “dad rescues kidnapped daughter”. Almost none of the characters have a personality, desires, or even interests outside of the central narrative. The core crafting mechanic also gets short shrift in the story, making the script feel tacked-on. 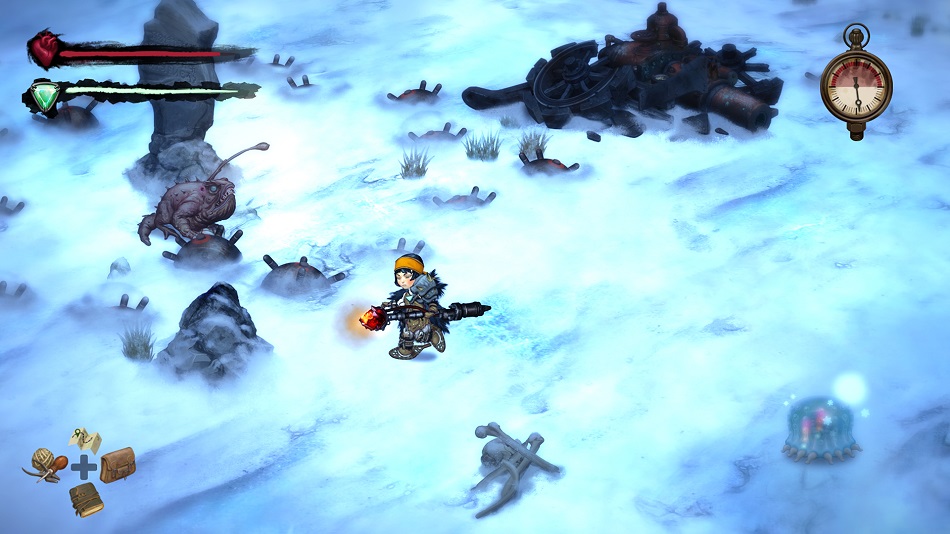 The crafting also feels underdone. Essentially everything in the game can be made from plentiful primary materials — not only is there no need to, say, make a steel plate from steel scraps, there’s no way to do such a thing. There’s also no way to experiment with creating new things. If Sachi doesn’t have the recipe for something, it can’t be made. The result is a flat and uninteresting crafting system.

Unlike some crafting games, Smoke and Sacrifice takes steps to ensure that most resources stay relevant throughout the runtime. The downside is the need to keep a stock of all of that stuff permanently, which rapidly butts up against the limited inventory space. Smoke and Sacrifice’s inventory limit is somewhat alleviated by the ability to store materials in chests, but the need to carry multiple weapons and shoes, along with a bevy of goods to heal Sachi, repair her equipment, decode new recipes, and protect her from smoke and various kinds of elemental damage led me to run out of space regularly. That Smoke and Sacrifice offers no means for sorting the inventory only made this more painful.

Another issue is that when prioritizing for a limited inventory, it helps to have comprehensive information. If, for instance, Sachi has a knife that deals ice damage it would be helpful to know if the cumulative ice + physical damage is going to outweigh the pure physical damage of a more advanced weapon. However, Smoke and Sacrifice never provides numerical or even graphical analysis for weapons or armor. This uncertainty incentivizes carrying around an extensive arsenal “just in case”, again making the inventory seem especially tight. 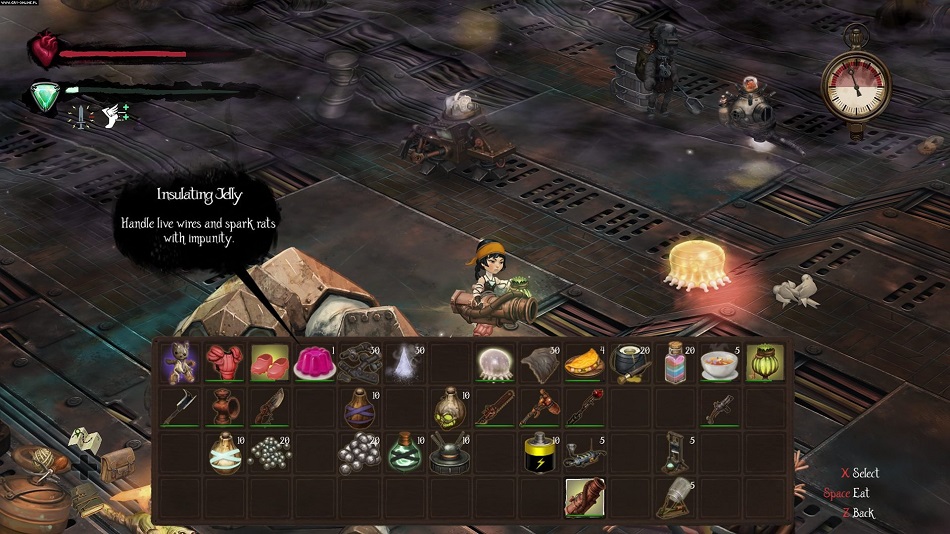 Of course, one can always experiment with loadouts, but actually fighting in Smoke and Sacrifice has little to recommend it. The traditional annoyances of isometric combat are all here — enemies attack from offscreen, transparency behaves strangely at critical moments, and Sachi sometimes strikes in an unexpected direction. In addition, most lifeforms range from very aggressive to extremely aggressive, and their tendency to make huge leaps or teleport around causes a cascade of aggro that turns many one-on-one duels into massive melees.

All of that would be fine, perhaps, if the combat had any grace or style, but it’s a one-button affair in which most attacks turn out to be an awkward combination of a swing and a lunge. A swunge, if you will. Reading enemies is fairly trivial, so combat is mostly dodging away at the moment of attack and then dodging back into swunge for a bit. It’s workable, but the animation and rhythm consistently feel a bit off.

Smoke and Sacrifice even manages to misuse its best asset, the art, by repeating environments. When Sachi arrives in the underworld, she lands in a swamp. It takes some time before she can craft equipment that allows her to enter a nearby snowy area. From there, I got move on to… another swamp, followed by… another snow field. A brief visit to a town leads into more swamp followed by yet more snow, and swamp, and so on. While occasionally there’s a gimmick, like a swamp that has a special cactus or an ice field that has just a really unreasonable number of grotesque birds, these environments basically all look the same. Eventually things move on to other biomes, but the dreary uniformity kept rearing its head even in the game’s deepest reaches. It goes without saying, I suppose, that none of these environments are arranged in a way that makes any coherent sense. 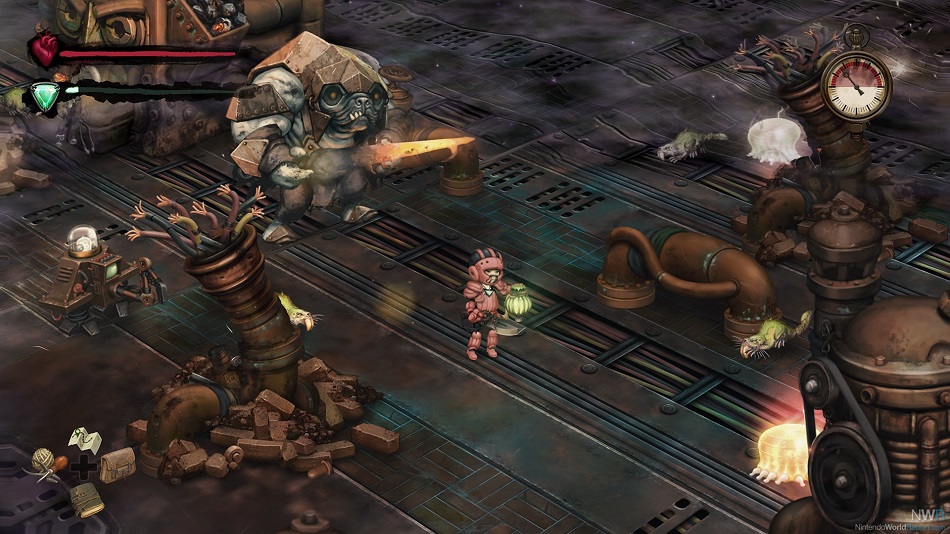 The non-swamp biomes also share a gimmick in that each one of them can only be traversed using special shoes. One needs to craft snow shoes for the fields of snow and rubber shoes for the electrified industrial floor and so on. Enter an area without the right footwear, and Sachi’s movement will slow to a fatal snail’s pace. That’s a minor annoyance at zone boundaries but it means certain death if her shoes break in the middle of a zone. Since items that are about to break give no more warning than flashing a dull red that is easy to miss during combat and against certain color palettes, this happened to me more than once.

All of this came with some basic software problems. I played the Switch version and felt it was not particularly stable —Smoke and Sacrifice crashed about five times during my playthrough, and additionally locked up once when I died simultaneously with a boss. The game’s reliance on sparse save points only made this more of an annoyance.

Smoke and Sacrifice also had an irritating habit, when fast-traveling or loading a save, of creating the world and spawning enemies before allowing action. On no less than six occasions, enemies camped out at fast-travel spots and killed Sachi or took her down to critical health before the world finished loading and permitted me to move. An additional two times this happened when loading a save, and it’s vital to know that Smoke and Sacrifice only allows one save slot.

All of this turned Smoke and Sacrifice into an unpleasant grind, a game I was heartily tired of long before it came to an end. It’s a shame that such lovely art is paired with monotonous environments, a rudimentary story, and subpar combat and crafting elements. My advice? Smoke something else. Rating: 4 out of 10

Disclosures: This game is developed by Solar Sail Games and published by Curve Digital. It is currently available on PC and Switch. This copy of the game was obtained via publisher and reviewed on the Switch. Approximately 20 hours of play were devoted to the single-player mode, and the game was completed. There are no multiplayer modes.

Parents: According to the ESRB, this game is rated T and contains blood and violence. I feel this is the ESRB erring on the side of caution; the violence is not gory or explicit. Some monster designs are a little frightening but overall I see this as being fine for preteens.

Deaf & Hard of Hearing Gamers: Smoke and Sacrifice has no spoken dialogue and dialogue boxes are white on black. Because the field of vision is narrow, sound alerts play a big role in letting the player know she’s near an enemy. Additionally, sounds serve as the sole notification when the player activates certain terrain features, e.g. mines, and are a prominent part of the legibility of certain enemy attacks. I expect the game will be slightly more difficult for hard of hearing players. 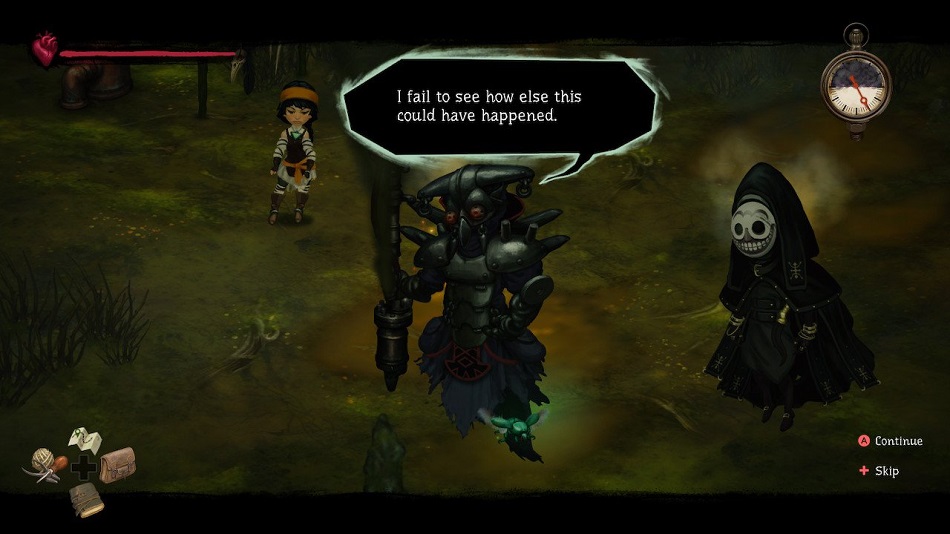 Remappable Controls: No, this game’s controls are not remappable and there is no control diagram.Movement is on the left stick and actions are on the face buttons. The D-pad (on the same side as the left stick) is used for crafting, map, and inventory access. Crafting requires a press-and-hold. Inventory switching is performed with the bumpers. 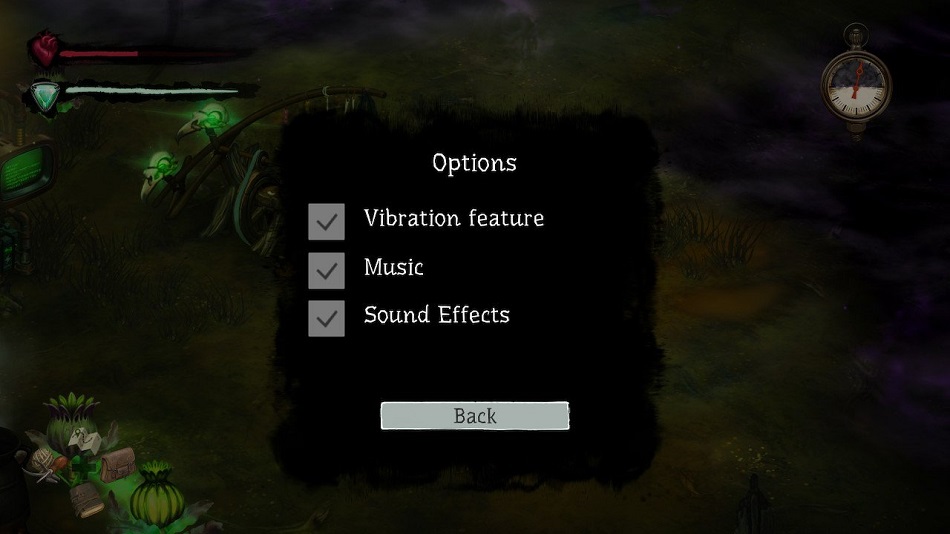