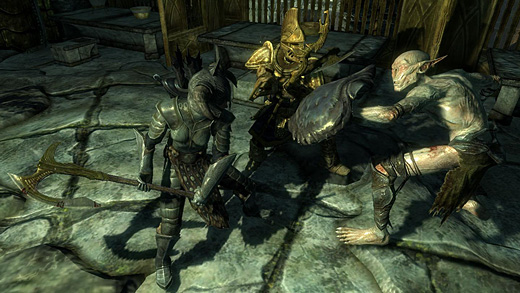 The Falmer are coming.

You can hear guards whispering about them in Skyrim's towns. You can encounter them through their attacks on trading caravans or isolated, unlucky outposts. In the journey to Blackreach, if not before, you will encounter the Falmer. Blind and pale, they scurry through the caves beneath Skyrim, clothed and armed with chitin from their hideous insect livestock, communicating in primitive hisses. Considering only these characteristics, it would be easy to dismiss the Falmer as goblins by another name, like Mass Effect's awful Vorcha. However, the fiction surrounding the Falmer positions them as a touchstone for many of Skyrim's main ideas.

The Falmer were not always grubbing blindly in Skyrim's caves. Once they were elves (called "mer" in The Elder Scrolls games) who walked on the surface, masters of the province. When the men who would become the Nords arrived from the continent of Atmora, the elves initially welcomed them, or at least tolerated them. Eventually tensions developed and the elves destroyed the human colony at Saarthal, for reasons that become clear in the Mages Guild questline. This prompted the human hero Ysgramor to attack with his Companions and destroy the old Falmer civilization in a genocidal war.

This history correlates with contemporary happenings in Tamriel during Skyrim, as the elves (in the form of the Aldmeri Dominion) are now an ascendant force on the continent. Although the human Empire managed to fight them to a stalemate in a recent war, the elves extracted significant concessions, and their agents of religious oppression move freely through human lands. The Falmer reflect the worst fear of humans facing a new elven domination: that they will receive the same treatment they gave the elves in an earlier age, both in Skyrim and Cyrodiil.

For a series that has spent most of its life in the reign of a single Emperor, Skyrim's focus on change and the transient nature of civilizations is rather novel. One could arguably see this theme in the Ayleid structures that poked into Oblivion like the bones of some dead creature. The Falmer have a more visceral impact, however, because the lingering ruins of their civilization are not whitewashed jumbles of stone but the people themselves, debased and twisted almost beyond recognition.

The degradation of the Falmer also resonates against the racism of the Dominion's Thalmor agents, one of the prominent prejudices in a game thick with them. Long lifespans, superior skill at magic, and military might seem to have convinced many of the elves that their kind is superior to man. The near-bestial Falmer undercut their rhetoric of racial superiority, simply by existing. If their cousins can sink to such a level, why not the Thalmor? 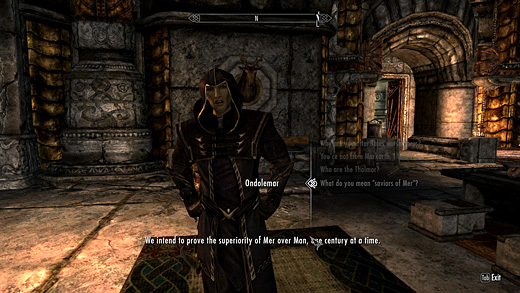 An added dimension to this arises from the details of the Falmer's transformation. They didn't choose to become blind cave-dwellers, after all. They only sank to this status after they fled into the arms of their relatives, the Dwemer, a technologically-inclined race of subterranean elves. Their welcome was short-lived. The Dwemer forced the Falmer to consume a toxic fungus that blinded them, then enslaved their weakened relatives. When the Dwemer destroyed themselves by trying to create a god, the Falmer were abandoned and sank into barbarism.

So much for kinship. The history of the Falmer reflects a betrayal of elf against elf, which might not seem so significant, except for the fact that the Thalmor explicitly call for a brotherhood of mer. On this basis, the high elves of the Summerset Isles were able to ally with the wood elves of Valenwood. Behind the rhetoric, however, it's obvious that the Aldmeri dominion only wants a brotherhood of the right kind of elves. They did not, for instance, take steps to protect the dark elves, who were swept out of Morrowind by Argonian forces. The mistreatment of the Falmer by the Dwemer highlights the fact that distant blood relationships don't necessarily make for stable alliances.

The Falmer themselves are a moderately interesting addition to the canon of The Elder Scrolls, but they are more notable for the way their plight intersects with other aspects of the world. Their sad past and debased present emphasize the transitory nature of power, the hollowness of elven "superiority", and the flimsiness of the alliances at the core of the Aldmeri dominion. As a result, they go beyond the goblins they replace, to serve as a central point for several of Skyrim's themes.