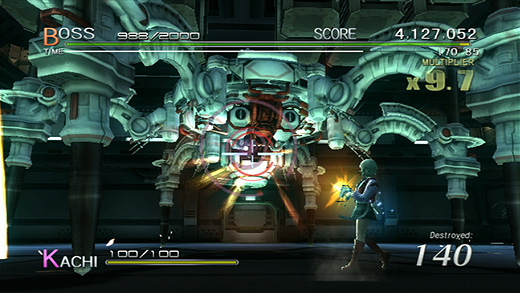 WTF So, the hideous bird-lion boss is our new best friend?

One might well wonder why on earth anyone would make a game like Sin & Punishment: Star Successor for the Wii. The developer, Treasure, is known for hardcore shooters like Ikaruga and Radiant Silvergun. While a game in that vein might fill a poorly-served niche in Wii software, it hardly seems like the sort of thing that would appeal to the console's broad audience of relatively inexperienced gamers. As I played the game, however, I came to understand Treasure's reasoning—the incredible robustness of the remote-and-nunchuk control scheme makes the Wii a solid hardware choice for shooters regardless of demographics. In addition, Sin & Punishment: Star Successor has been tuned to provide an excellent introduction to the genre for novices, and therefore may do a great deal to build the audience for this kind of game.

What a rosy picture I've drawn! Things don't begin so well as all that, however. Our introduction to the game takes the form of a cut-scene that showcases the game's weaknesses; there's practically no story, and what little exists is conveyed through stilted, poorly acted dialogue. Up close, as they are seen in these moments, the character models are distractingly ugly and even distorted, especially on an HD screen.

Thankfully, almost all the issues evaporate once the action starts. The game looks just fine in motion, with eye-catching enemies and beautifully-crafted bosses. The ordinary foes cover the screen while pumping out as many bullets as they can, but Treasure has tuned everything so that the system never chugs under their weight.

In the normal flow of action, the player uses the remote for shooting and the nunchuck for moving, without any waggle nonsense to ruin your wrists. Both playable characters can lock on to specific enemies for more certain hits, at a slight penalty in damage, and one character has a softer auto-lock. Charged shots and melee strikes are also available.

These latter factors often come into play in Sin & Punishment's numerous and inventive boss battles. The traditional elements are all here: hidden weak points, bosses invulnerable to anything other than the charge shot, screens absolutely full of bullets, and so on. Treasure also fiddles with the system to generate some interesting alternatives to a typical fight, including a sword battle and a segment that behaves like a classic 2-D fighter. These permutations aren't always successful—movement during the swordfight was unpleasantly sluggish—but they change up the action just enough to keep you on your toes. 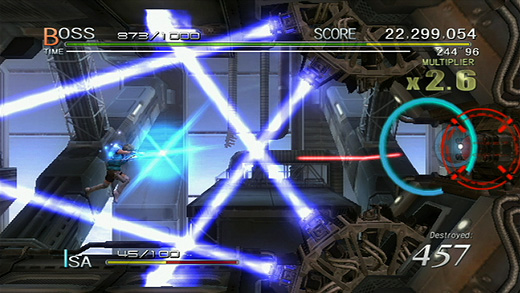 A change-up is needed because although the game (overall) is quite short, the visually diverse stages themselves feel very long, and they often end in a crescendo of multiple bossfights. Hardcore score junkies may rebel against this structure as it increases their chances of taking an unlucky hit and losing all the points from a good playthrough. The generous checkpointing, however, means that newcomers to the genre will never get too frustrated with their lack of progress.

An accurately-named "Easy" difficulty also makes for a gentle welcome, but that doesn't mean that it's a cakewalk. Sin & Punishment: Star Successor is a game where I died frequently because I sucked. The important thing here is that it was my fault; the control scheme almost never let me down. I knew that each death was the result of my bad decisions, my inattentiveness, my failure to read what was going on in a fight. The only exceptions were the slow-moving swordfight and one difficult-to-read boss. Even in those cases a simple adjustment of tactics was all I needed to get past an embarrassing game over.

After such a death, restarting from a checkpoint preserves progress but not score, so even people who never work their way above Easy difficulty have something to shoot for in replays. With its brevity and minimal story, the pleasure of Sin & Punishment lies in the old-school virtue of beating the high score, either a personal best own or someone else's. In this regard, the online leaderboards were something of a disappointment. They load sluggishly, and the game didn't seem to play very nicely with my console's Wi-Fi connection. Comparing scores to the rest of the world involves a lot of backtracking in menus, a design that feels dated in comparison to the effortless leaderboards of so many Xbox Live games.

Taking a few minutes to check scores might just feel like a welcome respite, however, after the intensity of Sin & Punishment's long levels. Treasure hasn't skimped on the frenetic action or toughness that the genre is known for, yet they've tuned the game to cut down the frustration for those who just want to progress without playing the same ten minutes of a level over and over again.

For the genre fan, Sin & Punishment: Star Successor will be a sublime, smoothly controlling treat. For the novice, it's a fairly gentle introduction to a classically hardcore experience. For Treasure, it's a great chance to addict a vast new audience to their style of game. Rating: 8.0 out of 10.

Disclosures: This game was obtained via retail store and reviewed on the Wii. Approximately 13 hours of play was devoted to single-player modes (completed twice on easy and once on normal).

Parents: According to the ESRB, this game contains fantasy violence. None of the violence is graphic and there isn't any blood. Honestly, I'm not even sure what justifies the T rating; any child old enough to play a console game will be fine with this one.

Deaf & Hard of Hearing: Some attacks are preceded by sounds, but overall you won't have much added difficulty. Subtitles are available in cut-scenes, not that there's anything interesting going on.

From your description, Star Successor seems to keep the same game-play as the original (which overall is probably a good thing).

Have you played the original? I would be curious to see how people who played the first Sin and Punishment feel about the sequel.

Glad you liked the review.

The sword move comes into play quite a bit, not only in the explicit sword battle, but also in most other boss fights and normal combat. The melee attack can deflect projectiles and strike nearby enemies, so it’s pretty helpful. Several of the bosses are very (or only) vulnerable to deflections of their own attacks, so you’ll use this move pretty often, especially on higher difficulty levels.

Great review! It’s always a pleasure reading something more level headed than the main online gaming outlets. [quote]Our introduction to the game takes the form of a cut-scene that showcases the game’s weaknesses; there’s practically no story, and what little exists is conveyed through stilted, poorly acted dialogue. Up close, as they are seen in these moments, the character models are distractingly ugly and even distorted, especially on an HD screen.”[/quote] This part made me laugh. Not because it is comedic in nature, but because this paragraph could be a review for the original! Not sure if you ever played… Read more »