You were Always on my Mind… 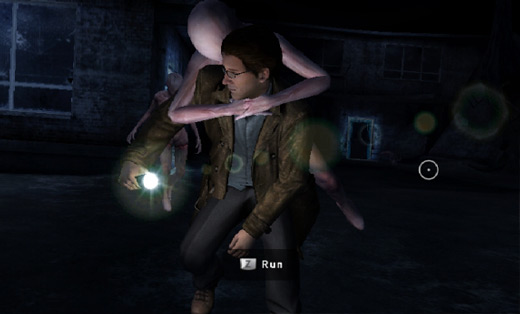 WTF It seems this therapist is a session drinker.

Silent Hill: Shattered Memories kicks off with a giant red warning that informs the player that the game will be profiling him. This is absolutely true, although it seems somewhat less impressive when it becomes apparent that the "profiling" will be carried out by an unpleasant fictional psychologist using literal tests. The appearance deceives, however: Silent Hill: Shattered Memories monitors where the player looks and what route he chooses through the eponymous town in order to determine what kind of person the main character is. The confrontational therapist and his overt examinations distract the player from the cleverest bits of profiling. This serves as an excellent metaphor for the game, actually, because the best ideas of Shattered Memories are all but buried beneath a thick layer of drudgery and frustration.

Shattered Memories puts the player in the shoes of desperate father Harry Mason, whose daughter, Cheryl, has wandered away following a car crash. He searches for her in the snow-blanketed town of Silent Hill. Using the Wii remote to point Harry's flashlight, the player leads the dutiful dad through shops, schools, and more to get around the snow-blocked streets. Along the way he can find "echoes" in the form of shadowy figures or significant locations: using the various capabilities of his phone (also controlled by the Wii remote), Harry can access audio files related to these echoes, which flesh out the story of the town. Unfortunately, although much of this supplemental material connects with the story in important, evocative ways, particularly the echoes found in the forest and the Toluca Mall, an equal amount feels like unconnected filler just thrown in to freak the player out.

The only real challenge in these exploration segments comes in the form of "puzzles" that Harry must often solve to find a key or open a door. I put that word in quotation marks because they don't involve any real brain power. The vast majority of challenges are overcome with such involved steps as opening a cabinet, pulling out a pin so you can open a cabinet, turning cans upside down, and opening a window. Simple and obvious actions rendered awkward and difficult by obtuse motion control might have passed for gameplay in December 2006, but three years into the Wii's life cycle we should be well past the point where tech-demo crap like this is viewed as praiseworthy, or even acceptable. Motion control offers no intrinsic intrigue or gameplay value; failure to act on this knowledge produces games like Shattered Memories, where the gameplay feels dull and perfunctory.

Although they are tremendously atmospheric at the start, these adventure segments also suffer from a pervasive lack of threat. Unlike other Silent Hill games, nothing is waiting around the next corner to get Harry, and Silent Hill comes across as a normal, if eerily deserted, town. All of this changes, of course, in the "nightmare" segments of the game, where the town freezes over so that everything turns blue except the army of monsters that appear out of nowhere. Harry cannot defeat these monsters, or even fight them in any real way. The best the player can do when he gets cornered is to throw them off using a Wiimote gesture that, for me, worked almost four out of five times. 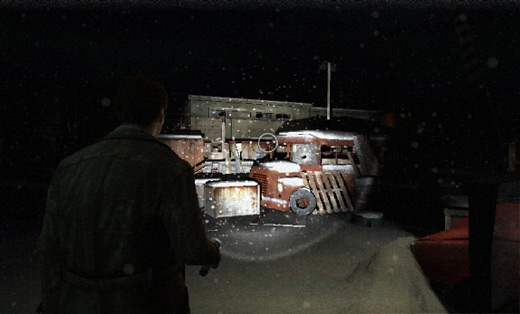 The real nightmare, of course, is that these areas are almost impossible to navigate. The reduced palette and repeating artwork have a tendency to make every part of a given nightmare look roughly the same. If the player chooses to walk rather than run, making himself more vulnerable to the monsters, Harry can open his phone's map feature, but it doesn't contain any useful detail. The resulting disorientation is appropriately dreamlike and frightening, but this pervasive sameness will likely result in the player running around in circles for a good long while before getting killed and having to start over again again. Frustration quickly wins out over fear in such circumstances.

This is not to say the design doesn't have potential. One of the last nightmare segments, one that essentially abandons the literal world of Silent Hill completely, shows off what might have been. The key feature here is a repeating-room maze. It's something of a cliché, of course, but the repeating room has the advantages of being both nightmarish and self-resetting so that the player never gets too lost. The developers also used a subtle visual hint in this segment to help guide the player through the maze, an idea that should have seen more play in the other nightmares. This same portion of the game treats the player to other mazes that make interesting use of the "echoes" and the flashlight. These exercises played to the game's strengths, and they convinced me that this approach could have worked. Sadly, it's just a small glimmer of hope in a dull, monochrome night.

Like many games in the series, Shattered Memories throws a twist at the player in its final moments, one that I will not describe here except to say that I thought it worked, remolding my perception of the game's events into a really interesting new shape. The effect was not entirely positive, however. Given the twist, the game is about Harry bringing himself closer to Cheryl across several different kinds of distance. In this view, though, the amusement park section feels tremendously misguided, a step taking Harry away from his goal just as he should be getting closest. Some episodes of the story, particularly an absurd encounter with a nurse, don't seem to fit into the plot at all, and in retrospect just look like filler. Even at 7 hours or so, Shattered Memories feels like it's too long, and while that problem begins with the gameplay, it is only accentuated by the shortcomings of the story.

Climax previously made Silent Hill: 0rigins, unequivocally the worst game in this declining franchise. They have not done so badly in this case, and if that sounds like I am damning the game by faint praise, well, I am. Shattered Memories is an uneven mess, most favorably described as a kernel of greatness wrapped in a husk of wrong-headed design and iffy implementation. Its plodding adventure segments lack tension or any kind of serious challenge, and most of the nightmare segments suffer overmuch from their inscrutable geography. That said, the no-combat aesthetic is more true to the essence of the series than Homecoming's ninja-dodge fighting, and the game's psychological responsiveness, if a bit obvious, could have been pretty creepy without the big red warning. Does this mean that Climax could get it right, could produce something that matches the series's earlier, delirious highs? Perhaps so, but they didn't do it here. Rating: 5.0 out of 10.

Disclosures: This game was obtained via retail store and reviewed on the Wii. Approximately 15 hours of play was devoted to single-player modes (completed 2 times).

Parents: According to the ESRB, this game contains blood, drug references, language, sexual themes, and violence. Most of the characters drink a great deal of alcohol, and some material involves asphyxiation for pleasure and deviant sexual behavior (e.g. pedophilia). This is probably not appropriate for anyone still in high school.

Deaf & Hard of Hearing: Like all Silent Hill games, Shattered Memories relies to some extent on audio cues. There are screen effects to supplement them, but I had a much more difficult time finding  "echoes" with the sound off. At least one puzzle relies exclusively on sound. Although all dialogue is subtitled, hard-of-hearing players may require assistance to complete the game.

I am playing the PSP version of this game right now. I ahve had the chance to play on both the Wii and the PSP. The graphics are still crystal clear and fluid, just much smaller. The controls are not difficult to master in regular play, but get clumsy during the nightmare sequences. The size of the screen does not help at all during nightmares, as the colors all seem to run together, and small areas where Harry can hide or escape are sometimes difficult to see. Otherwise, the game translates beautifully. By the way, if you can squeeze 15… Read more »

Great review. I’m wondering if anyone here has had a chance to play the PSP version of the game. At $30, it’s an appealing price for 7-15 hrs of Silent Hill gameplay, even if some of that gameplay is misguided. I first played Silent Hill Origins (and I’ll agree with Sparky that that game is the worst in the series, although from what I’ve played of Homecoming, that’s a close second) on the PSP and was really impressed by what Climax did graphically on the system. I’m interested to see if they did a better job game-wise while maintaining the… Read more »