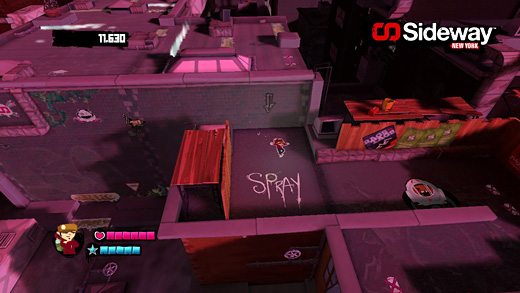 LOW Taking the last block of life off the boss only to have him regain it and kill me as I scrambled to pick the controller back up.

WTF What does the Knuckler boss have to do with anything?

Sideway: New York has an amazing premise. Its hero, Nox, has been sucked into a two-dimensional world of graffiti painted on the buildings of New York City. That seems to promise a game with unique art direction that rewards creative players, letting them paint their way around obstacles and urban blight. A game starting from that idea could match the recent masterworks of 2D platforming. Unfortunately, things didn't turn out that way, and Sideway: New York is the least interesting thing that could be done with its premise.

The graffitied walls of New York City provide Sideway a natural graphical hook, but street art actually doesn't contribute much to its levels. Although the wild geometry of spray-painted signatures seems like an obvious way to generate complex landscapes, the bulk of each level is made up of features on the buildings themselves. Tags regularly appear as platforms or obstacles, but even in these cases they are crammed into conventional forms that may not be suitable. For instance, the tags always produce perfect rectangles for Nox to walk on, and Sideway posits that someone has been painting a lot of cannons on New York's buildings.

The fact that the two-dimensional game world exists within a three-dimensional world mostly serves to muck up the platforming with unpleasant 3D camera movement. The exception comes on the rooftops, where Sideway has some interesting mazes. The effective direction of gravity carries over from the wall Nox uses to enter the roof, so by jumping off and back on the player can effectively rotate the area by 90 degrees. In these moments the possibilities of the game really show, but they're all too infrequent.

Although Nox is apparently a tagger, almost none of his abilities are art-based. He can paint in his name in a few predefined areas to make new ground to stand on, but for the most part Sideway is content to arm him with typical platforming moves. In one early boss fight Nox creates obstacles that damage his enemy. Mechanics like this should have been the core of the experience, but this trick is never repeated. Worse, the remaining bosses mostly use the same basic strategy, making each fight tedious and dull.

The exception is a bizarre fight against a mechanical monster near the end of the game. This fight wisely makes use of the player's platforming skills, but the fact that it alone is a 3D boss makes it feel like something that had been imported from another game entirely.

That fight is set in Times Square, a label that marks the only time Sideway at all seems to actually be set in New York. Otherwise, none of the city's iconic locales or notable urban artworks put in an appearance. Not even the subway really shows up. Granted, graffiti-covered trains have mostly become a thing of the past, but a level set on one of the tagged-up '70s cars would have done an amazing job of linking the game's premise to its setting.

The thematic possibilities of the game's setup are also ignored. Sideway includes a hip-hop soundtrack that links the graffiti-based art to the larger urban culture, where both art forms are influenced by the poverty and violence suffered by the communities from which they emerge. Rather than engage these themes, Sideway tosses out a tissue-thin "save the girlfriend" plot with an indistinct villain. The fact that the protagonist is a soul-patched white boy only magnifies the impression that the hip-hop aesthetic is a pose.

The setting, urban art theme, and gravity-shifting mechanics give Sideway: New York plenty of opportunities to stand out, but it squanders all of them. Instead, Nox navigates bland levels and takes out repetitive bosses with a set of generic powers. With so much potential, it's remarkable that Sideway ended up being so ordinary. Unfortunately, that's the only remarkable thing about it. Rating: 5.5 out of 10.


Disclosures: This game was obtained via publisher and reviewed on the PS3. Approximately 5 hours of play was devoted to single-player mode (completed once).

Parents: According to the ESRB, this game contains mild language, fantasy violence, crude humor, tobacco reference. There's not really much to offend, though one boss does attack by vomiting.

Deaf & Hard of Hearing: The game can be played silently almost without loss. The final boss does have a helpful sound cue for one attack, but this can be avoided even if the sound is off.

I take issue with one thing you said in your review: “The fact that the protagonist is a soul-patched white boy only magnifies the impression that the hip-hop aesthetic is a pose.” Maybe you are out of touch with the scene, but taggers are mostly white. At least these days. Maybe it was different in your day, but a new generation has taken over from whatever it was in the 1970s and 80s. And these white youths have long since embraced hip=hop music and the culture as demonstrated in school yards and college campuses across the country. Yes, the game… Read more »

This is incredibly disappointing. I had hoped Sideway: New York would be a sort of mixing of Nintendo’s Paper Mario and Sega’s Jet Grind Radio–one dealt with switching between 2D and 3D while the other at least attempted to incorporate graffiti tagging within the world.

That the game is just a 2D platform on a “unique” background shows an inability to unwillingness to really push themselves creatively. Either way it’s a shame.