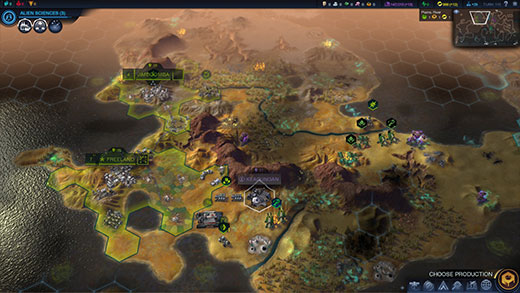 HIGH Squeezing out a transcendence victory just as my main competitor starting shoveling units into the Emancipation Gate.

LOW Finishing the Exodus Gate on a map that had far too little free space to actually achieve the victory.

WTF Getting condemned as a warmonger because none of my enemies would negotiate for peace.

A pod lands on an uncharted planet, leaving the player to explore it by moving a buggy across its surface, and within a few turns, the player can launch satellites. This mandate to explore in the early game, carried over from the classic Civilization structure, provides a way to fill turns with activity while the player lacks sufficient cities, terraformers, and military units to make things interesting, so keeping this initial phase of ‘discovery' makes a certain kind of design sense. It makes no logical sense, however, when that landing pod came down from outer space, and the civilization has the capacity to launch satellites immediately. In that choice, though, as in many others, Beyond Earth clings to the familiar rather than develops a unique experience.

Of course, being part of the Civilization series, certain things are expected. The player must build and improve cities and claim resources in order to provide a base for military might and economic and technological advancement. Only by strategically balancing the need for money, strength, and research, carefully choosing which city improvements and which unique wonders of the world to build on which turn, can the player's society triumph over others. Unfortunately, Beyond Earth hews too closely to the established Civilization model rather than taking its sci-fi setting as a chance to experiment with the weird.

Sid Meier's Alpha Centauri, to which this game is a spiritual sequel, imagined a world sheathed in a semi-sentient fungal substrate of a planet-scale mind, infested by telepathic worms. Beyond Earth offers up nothing so strange or so challenging. Some tiles have a harmful miasma that damages units, but it's nowhere near the obstacle the fungus was. Otherwise the worlds of Beyond Earth are almost completely mundane, except for giant bugs with the capacity to sink battleships. Asimov has been traded in for Verhoeven, sci-fi for SyFy.

If the worlds I found were too reminiscent of Earth for my taste, the same could be said of the factions. All of them are tied to the geography of the abandoned planet. They've been remixed so no identifiable nations are in play, but I still got the sense of a story tied to the old homeworld rather than one directed towards the future in the stars.

At least the player can eventually orient the development of his new civilization away from the mother planet, if they choose. The game allows the player to participate in three governing philosophies—requires it if she wants to develop her military units beyond the most basic level. Societies can cling to the old ways, insisting on human purity, or they can choose integration, either into the biology of the new planet or into the circuitry of computers.

The player picks this course by making choices in various quests in the game (some of which are broken) and, more significantly, by researching particular advances. As each of the different philosophies has attractive advantages and technologies, the choice seems significant. These can be difficult to parse out, however, as the web-like science interface tends to obscure rather than emphasize the benefits of particular routes of research.

Each philosophy has its own game-winning move, but while all of them boil down to building a large wonder and then doing a little extra work for 20 turns or so, they are badly balanced. The purity victory, for instance, requires building a minimum of four settlements, which can be a challenge even on a massive map if the game has gone on long enough. The biological integration approach, though, only requires the player to wait around for 20 turns (and can be sped up).

There's a similar requirement for the universally-available ending of contacting an ancient race of aliens. To get that far, the player must fend off other factions. Unfortunately, diplomacy is the game's weakest system. The interface itself tends to obscure information, particularly when enemy factions want to trade money or resources mid-turn. The enemy AI is also shot through with head-scratching behavior, as when two factions that were both actively trading and on friendly terms with me simultaneously declared war without having lodged any previous complaint.

This scuffle damaged me none, as the AI is broadly incompetent at actually prosecuting a military campaign, and I fended them off with a handful of units. However, both belligerents refused to negotiate for peace. I took a few cities to be able to offer them back as bargaining chips, and still they wouldn't talk. So, continuing to fruitlessly request peace talks every few turns, I methodically rolled up both their empires (again, never building a single additional unit) at which point all the remaining nations in the world condemned me for warmongering. While it was all quite frustrating, this sort of behavior wasn't that far out of the norm.

Civilization's legendary procedural hook remains intact in Beyond Earth. I did want to play one more turn. That addictiveness comes from the formula, though, and the best that can be said of this game is that it largely stays out of the formula's way. Beyond Earth feels like it's coasting, riffing ever so slightly on a well-worn loop, but seemingly uninterested in real innovation or imagination. It may leave our planet, but Beyond Earth doesn't get far enough away from its roots. Rating: 6 out of 10


Disclosures: This game was obtained via retail purchase and reviewed on a home built Windows 7 PC equipped with an Intel i7 processor, 8 GB RAM, and a single Radeon R9 270X graphics card. Approximately 70 hours of play was devoted to single-player modes (completed 6 times) and 0 hours of play in multiplayer modes.

Parents: According to the ESRB, this game contains alcohol reference, fantasy violence, and language. The alcohol reference is minor and completely forgettable. E10 strikes me as a high rating in terms of content, though the stately pace of the strategy gameplay may not appeal to younger children.

Deaf & Hard of Hearing: Nothing essential is conveyed via sound. Some parts of the interface primarily indicate that they have gone from good to bad status by changing color from green to red so colorblind individuals may have a little trouble keeping track of health.

I agree completely, alpha centauri and civ II are the best hands down! why can’t fraxis pull their heads out

You look a little angry in your image.

I’ve never played a Civilization game. Would this game be a good start for the franchise?

Beyond Earth is a decent entry point for the Civilization franchise, but it and Civ V differ in some significant ways from preceding games (hex grid vs. square isometric, etc.). My personal favorites in the series are Alpha Centauri and Civ II, both of which came before the series moved to Firaxis. I am told that Civ IV is excellent, but I haven’t played it myself, having taken a break after the disappointing Civ III.