What should be evident to you after reading Eric's post is that the basic dynamic of combat involves trading Booker's renewable resources (his shield and health) for his enemies' non-renewable resource (their health). Typically health regeneration mechanics give rise to cover-oriented gameplay, and Infinite encourages this in some respects. For instance, most of the vigors in the game can strike multiple enemies and make them "vulnerable." This enhances the damage that Booker can do to them, but more essentially it prevents them from firing on him, extending the amount of time it's safe for him to be out of cover.

Popping out of and into the same cover spot is not the best choice, however. Because the shield is small relative to the health bar, suffering some relatively permanent damage is almost a certainty in any combat scenario. Booker has numerous opportunities to obtain health items from the environment and bodies, but cannot keep any with him for future use. These factors encourage movement and scavenging during battle. Additionally, the two-weapon limit prevents the player from hunkering down even when the health dynamics make this favorable—ammunition runs out too quickly. Again, the player must move to acquire ammunition or new weapons, particularly during more intense combat encounters. In this regard, the vigors can be used to obtain breathing room that allows Booker to run and scavenge while enemies are unable to attack.

Obviously the player should try to combine attack and resupply, and Infinite makes it relatively easy to deal damage while on the run. The absence of any reticule bob makes aiming from the hip on the run a practical option, and even when they're moving, enemies are relatively easy to hit. Rapture's splicers would tumble and jump to avoid fire like escapees from the Cirque du Soleil, but Columbia's troops tend to keep their feet on the ground.

Ideally Infinite should make it easy to scavenge while sustaining fire, but functionally this isn't the case. I can't speak to how well things go on the PC, but on consoles the functions for reloading, picking up a new weapon, scavenging a body or container, catching supplies thrown by Elizabeth, and bringing in new objects through tears are all mapped to the same button. The predictable result is that Booker regularly interrupts his shooting to gulp down a can of beans rather than reloading, and occasionally picks up a new gun when the player is trying to summon a turret. While it badly overloads the X button, Infinite reserves a button for crouching, even though this is almost never of any tactical advantage and is at odds with the mobile focus of combat. 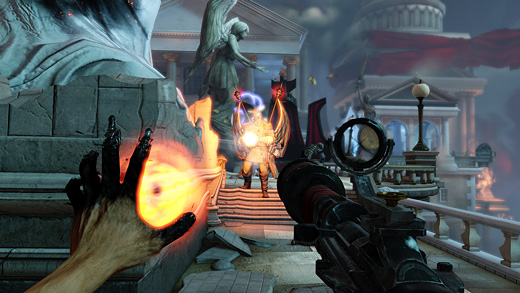 Of course, the player may still find himself pinned down, or fail to find useful supplies while ranging around the combat zone. For these cases the developers have provided Elizabeth, who helpfully tosses Booker regenerative items and ammunition. Elizabeth also resurrects the player if he gets killed, and she herself cannot be injured in a fight. After years of escort missions made frustrating by boneheaded AI, this seems like a really good idea. Unfortunately it addresses a real problem in an inappropriate way.

The downside of invincibility is that from the standpoint of the player Elizabeth is purely an asset. Booker is fighting to protect Elizabeth, initially as an investment, and later as a result of his emotional attachment to her. This makes her his responsibility, from his point of view, which is the starting point of their relationship. The player, however, knows that Elizabeth cannot be harmed and is therefore only ever fighting to defend himself. In the context of combat, he is dependent on Elizabeth rather than the other way around.

This may be part of why the Siren fights fall flat for so many players. The battles mean to trade on Elizabeth's confrontation with her mother, an emotional conflict that doesn't involve Booker directly. His angle on this fight is his desire to protect Elizabeth, emotionally as well as physically. The demonstrated reality of the game, however, is that Elizabeth can't be harmed, so the player lacks this protective reaction. To the player, Elizabeth is only in danger when the progress of the game is out of his hands and in the developers'.

Elizabeth's combat invulnerability also hollows out the game's final battle. The Vox open this battle by threatening Elizabeth, but of course by this time the player knows that she's not in any real danger. Instead of actually going after her, the Vox soldiers attack the giant lightbulb that powers the prophet's ship. Because the setup is so ridiculous, the ensuing wave battle is devoid of any emotion aside from frustration.

That frustration comes from the level design. The balance between mobility and cover means that battles in Infinite are at their best when the player can easily move in and out of firing lines. This means that arenas should have a high density of "standing cover" or vertical blocking that breaks up the enemy line of sight without hampering player movement, and defined entry points so that the player can quickly locate and control enemy positions. For much of the first part of the game Infinite has these features in abundance. The first fight on the rooftops, for instance, takes place in an area with lots of tall cover objects and occluded sight lines. So long as the player does not advance too quickly he will not take too much fire. This tendency to put Booker on the opposite side of an arena from his enemies and provide plenty of room to hide while standing is upheld in most areas up until the moment that Booker summons the gondola to the First Lady. 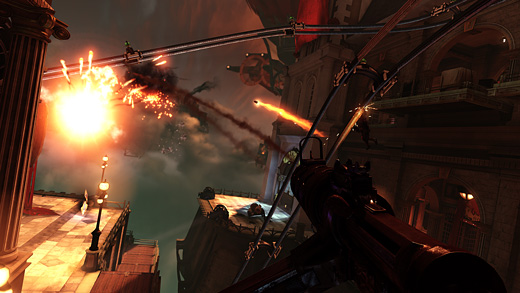 The ensuing fight is actually pretty instructive, because it contrasts so clearly against the previous one that happened in this area. In Booker and Elizabeth's first visit to the Soldier's Field, the city policemen set up an ambush at the top of some stairs. On the ground level, there's plenty of tall cover to break up sight lines and feed the game's better combat dynamics. When a second wave of policemen does arrive, it's in the form of cops that the player has likely already seen when he explored the level in its peaceful condition, contributing a narrative feel to the flow of combat. In the second fight, enemies arrive on barges and several of them disperse to the skylines, spreading throughout the upper part of the area. Other soldiers start to fire rockets from the barges, and eventually a Motorized Patriot arrives on the gondola. Although the design of this zone still blocks many sight lines, the player will almost certainly be taking fire from unknown enemies in an unexpected direction during the ensuing battle. Consequently, this shootout takes on the "spammy" characteristic Jon Blow complained about on Twitter (the compiled tweets are near the bottom of Kirk's article, which is worth reading in its entirety).

A few of the remaining skirmishes will be directional, but from this point on most of the major battles happen in large arenas with very good lines of sight, enemies inserting at many different spots, and open areas that cannot be crossed safely even with a maxed-out shield. These problems are all in evidence in the final wave battle, which takes place on a large open surface with minimal defilade and a second tier that enemies spawn onto. This means that the rhythms the player learned in the first part of the game no longer apply, and even when elements of an arena support these dynamics, they tend to be detonated by special enemies like the Handyman or Siren, as Schwarz discussed.

This construction has a perverse effect on player priorities. Stronger foes like Crows or Firemen are meant to draw the player's focus, but in the context of a large open arena these enemies are actually much easier to manage than the everyday mooks kitted out with rifles. Long-range shooting poses a much greater danger to Booker's shield than the relatively easy-to-dodge attacks of the minibosses. In these cases, only the Motorized Patriots deserve player attention equal to their apparent deadliness.

The game's late tendency to engage at range produces a distancing effect and helps to other the enemies that Booker is facing. The lack of sophisticated AI dynamics that Eric describes also emphasizes that the game's enemies are less than human. Aesthetic beats like heads exploding due to shock jockey or bodies burning down to ashes further encourage the player to treat enemies as abstractions rather than people, which is compounded by the Vox's tendency to wear masks. One might say this mirrors the dehumanizing behaviors of Jeremiah Fink, who thinks of his workers as oxen, and Zachary Comstock, who unfavorably compares people of African ancestry to his childhood dog. Even if you buy that, this is the wrong character beat for Booker, who recognizes (but does not respond to) the humanity of his enemies and the wrongness of his actions. In part because Infinite's enemies aren't convincing—or even interesting—simulacra, the player isn't able to share in his understanding.

Infinite's shooting mechanics don't benefit its narrative. The player's balancing act between moving and taking cover produces interesting decisions up until the arenas become too open, but it doesn't seem to tell the player anything about Booker. The impressions that do accumulate from the player's combat experience mostly work against Booker's character. Arenas that don't play to the strengths of the shooting dynamics make combat progressively less interesting in its own right, and the failure to establish any combat stakes concerning Elizabeth reduces the emotional impact of battles that should be climactic. BioShock Infinite may need violence, but it doesn't need this design.