The Kits Are All Right 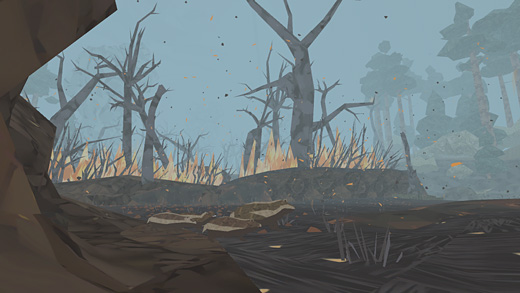 LOW Having a cub swept away by the river because he decided to do his food dance in its general vicinity.

I am a terrible mother.

That's the main lesson I've taken from Might and Delight's ma-badger simulator Shelter, which cast me as the matriarch of five cubs and then watched in silent judgment as I got them killed by predatory birds, raging streams, and unseen hunters of the night.

I feel bad for the ones I lost, but I'm honestly not sure I did right by the survivors, either.

Shelter's world is not just about death from forest fire or drowning. As mother to a badger family, the player is expected to dig up roots, knock down fruit, and catch small animals to feed her brood. The mechanics for doing all of this are relatively simple, yet things never seem to work smoothly.

When food is available, and especially if mom is about to feed them, the cubs form up in a little semicircle to ask for their dinner. Unfortunately, they often have trouble with it and end up charging into a boulder for a while, or shoving their noses under mom's butt. Mom doesn't always drop food when you tell her to, either.

The basics of gathering food are supplemented in each of the five short levels by different challenges. In one, dark and loud noises cause the cubs to run off. In another, a rainstorm causes a flooding stream that must be crossed. Food tends to be plentiful enough that the cubs won't starve, but these dangers are almost certain to knock off a few kids.

The level gimmicks don't always work well with the core mechanics, though, especially in the dark level where the mother generally can't run and all her cubs must remain in a small space around her lest they be eaten. The inability to run seemed to confuse the game about whether I was trying to pounce on a frog or make a noise, and its efforts to keep the cubs both in the "safe zone" meant that they squirmed away whenever I tried to feed them.

This speaks to a game that feels more like a rough draft of a design than a refined work, despite its lovely graphics and charming music.

For example, putting almost every interaction into a mouse click overtaxes the interface, while at the same time oversimplifying the mother's deeds. Unlike actual badgers, she need not really dig for her supper. This speaks to another hole in the design—the mother doesn't need to eat. As a result, the player is never asked to make difficult choices about whether to feed one cub or preserve her strength in order to feed the rest.

Worst of all, the limited cub AI deprives Shelter of the emotional impact it's clearly aiming for.

The ending seems intended to give the player the feeling that his efforts to preserve the cubs will result in their continued survival. However, even in the final level the cubs show no indication of independence. Even though they are almost as large as their mother, she still must feed them and hunt for them. They don't even scatter to safety on their own when a bird starts hunting in the area. The complete dependence of the cubs up until the very last moment of the game denies the player the bittersweet success of seeing children that don't need their mother anymore.

That Shelter is not a particularly convincing simulation of being a badger is no real sin—I doubt many people want to play a game about eating earthworms all day. The game's real failure is that it's not an emotionally compelling representation of parenthood. It convincingly shows that the cubs need their mother, but fails to convey the possibility that they can ever not need her. Rating: 5.5 out of 10.


Disclosures: This game was obtained via publisher and reviewed on a home-built Windows 7 PC with an Intel i7 processor, 8 GB RAM, and a single Radeon 6800 HD-series video card. Approximately four hours of play was devoted to single-player modes and the game was completed twice.

Parents: As of press time, this game has not been rated by the ESRB. Shelter does not contain any gore or sexual content, but the death of small animals is a repeated feature of the game and may upset some very young players. With this caveat in mind, I believe it would be rated "E," and is appropriate for all ages.

Deaf & Hard of Hearing: The game has no dialogue and some sound cues are accompanied by visuals. However, sounds give advance warning of many environmental dangers, and without the ability to hear I expect the chance of losing cubs in stages 2-4 will be heightened.

This is why I love the indie scene. Which of the big three console makers or big third parties would have green lit a game like this?! Even though you didn’t like it I am still interested in trying it out.