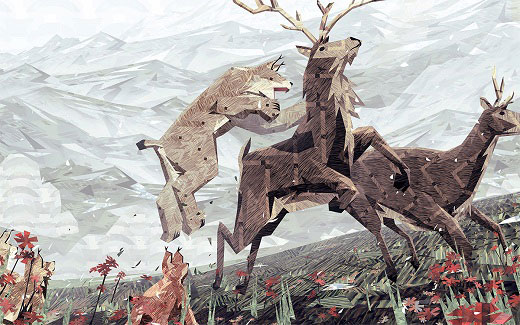 HIGH The moment when I chased a rabbit towards one of my cubs and it caught the thing.

LOW One of my cubs lay down starving just as night fell, and all the prey disappeared.

WTF I startled a rabbit and chased it only a few feet before it turned around and ran straight into my mouth.

What do you say about a sequel that addresses your complaints about the original, but still doesn't succeed?

Shelter 2 is a followup to 2013's Shelter. I loved that game's unique concept and look, but thought that it fell short on embodying its ideas. Shelter 2 actually addresses two of the main problems I had, but I regret to say it's not an improvement overall.

I'm predisposed to like the lynx protagonists of Shelter 2, not only in a general way due to (likely) toxoplasmosis infection, but also because my own incredibly adorable kitty has little lynx tufts on her ears. However, the choice to focus on an apex predator was a mistake.

The size of Shelter's badger relative to its surroundings made for a real sense of danger and risk that's almost absent now. More importantly, the badger's omnivore status prompted a broad spectrum of foraging and hunting interactions, and Shelter 2 suffers for their lack. The lynx has only one way to get food, and that's to hunt. This could have been interesting, but the hunting system is too shallow.

The game has only a few animals for the mother lynx to go after, and even fewer tactics for her to explore. Small animals that feed one cub can generally be caught by running around once they're spotted. Larger animals must be stalked until they notice the lynx and then chased down, but there are no real tactics or nuances to learn, especially since the prey seem to sense the lynx based on proximity regardless of whether she has cover or not, and wind direction (giving her away by scent) does not appear to be modeled.

One modest success in the hunting system is that it creates incentives for the mother to feed herself rather than dropping every scrap of food in front of her cubs. Larger animals generally require a longer chase, and the mother has a stamina bar that drains as she runs. By eating some smaller prey, she can extend that bar and give herself a greater chance of hitting the jackpot with a deer. This isn't enough of a benefit when she catches a rabbit that can feed two her four cubs, but keeping smaller prey for herself is a consideration.

The hunting takes place in a mostly-open wilderness, rather than the string of levels the previous game offered. This might work better conceptually for a territorial predator, but it prevents Shelter 2 from offering the moody and atmospheric moments that were so distinctive in the previous game. Additionally, some parts of the map seem totally devoid of food, and in light of the cubs' ravenous hunger, this is a strong disincentive to wander in those directions despite the array of collectible items-twigs, mushrooms, and the like- that could not possibly have been of less interest to me.

Complicating things, only a small portion of the map can be explored in any given generation, because each lifespan is so short. A quick cycle through a few seasons—so quick that winter changed to spring before I caught my first rabbit—takes the cubs from totally helplessness to independence.

It's wonderful to see the cubs learn how to fend for themselves, and the fact that this happens is a major and much appreciated advance over the first game. However, each generation passes so soon, and the bar for preserving a majority of the brood feels so low, that shepherding the lynxes from mewling kittens to dangerous predators doesn't feel like much of an accomplishment.

It's not clear to me what's meant to drive continuing engagement with Shelter 2. A player can build out a family tree by raising successive generations, but playing through those generations isn't a big draw since the interactions aren't compelling, and the ability to develop atmosphere is limited by the rushed changing of the seasons. In some ways, Shelter 2 improves on its predecessor, but its brevity and lack of depth make it much weaker than the first overall. Rating: 4 out of 10


Disclosures: This game was obtained via publisher and reviewed on a home-built Windows 7 PC equipped with an Intel i7 processor, 8 GB RAM, and a single Radeon R9 270X graphics card. Approximately 4 hours of play was devoted to single-player modes and the game was completed twice.

Parents: As of press time this game has not been rated by the ESRB. Shelter 2 contains violence, as most of what you'll be doing is hunting cute little animals and eating them or feeding them to lynx kittens. It's not any more violent than a nature special so I would rate it E or E10 at the outside.

Deaf & Hard of Hearing: Sound cues are not particularly helpful, and there is of course no dialogue. In a special view meant to make hunting easier, animals appear in red, which may not be as distinctive for colorblind individuals.

I gave the first Shelter a try, and while I appreciated what it was trying to do, I just couldn’t get invested. This one definitely looks less interesting since, as a predator, there isn’t as much threatening the lives of you and your offspring. That and the rapid transition from cub to adulthood does diminish any real sense of a fight for survival. PRobably for the best I passed on it.