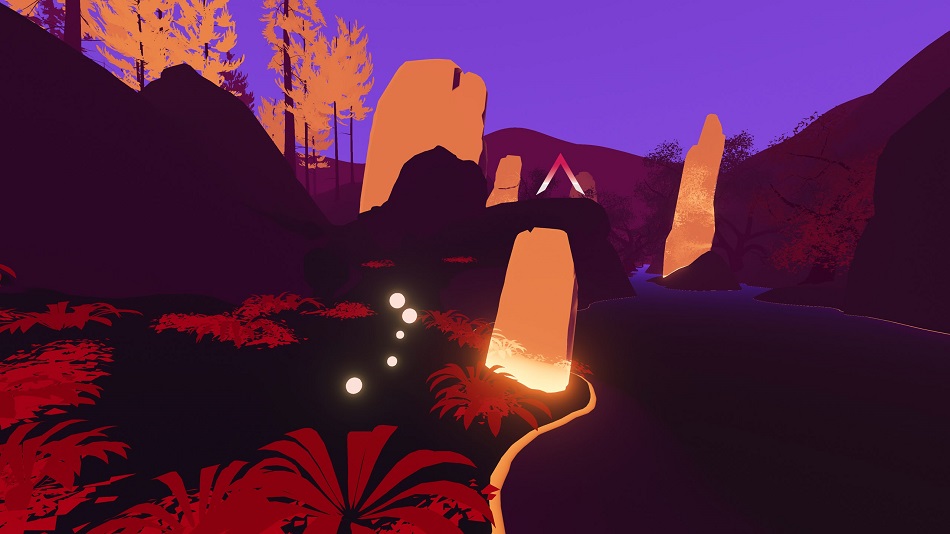 HIGH The music is great and the sound of the walkways appearing always works well with it.

LOW Trying to aim at monoliths on the mountain.

Shape of the World is a mildly psychedelic meander through a lightly proceduralized wilderness, stripping narrative out of the typical walking simulator setup in order to focus purely on delivering an calming experience. It takes the player on a journey from a seashore to the top of a mountain, but fails to develop a world worth contemplating, or a journey that feels as effortless as a relaxing stroll.

What’s immediately striking about Shape of the World is how indistinct its landscape is. Each area is built of only a few key colors and shapes that aren’t generally outlined, so various parts of the terrain blur together. Ironically, this makes it difficult to see exactly what the shape of the region actually is. An additional result of this aesthetic choice? No particular area is all that interesting to look at for long.

As is often the case in this kind of experience, the soundtrack is the most admirable part. The work here is done by Brent Silk, and there’s a certain value to just zoning out in one of Shape of the World’s areas and just listening to the tunes. However, the music isn’t always engaging, so the pleasure of hanging around and grooving will likely depend on one’s degree of intoxication. 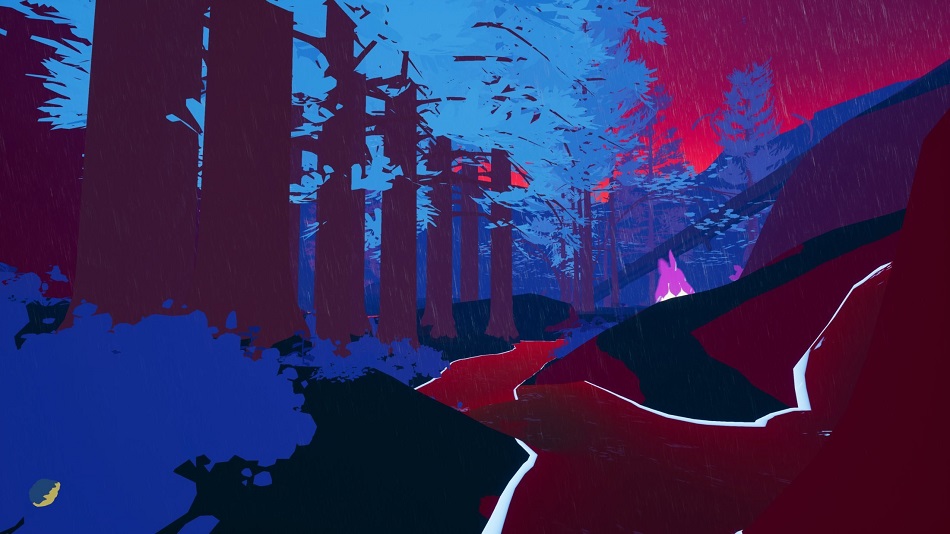 Each region has distinctive wildlife zipping around, but once one groks that the creators’ main aesthetic trick is to position aquatic lifeforms as terrestrial or flying ones, any possible wonderment starts to fade. There’s little that’s truly fantastical here, and the animals rarely interact with each other or the player. Sometimes they don’t even interact with the landscape, clipping freely through nearby surfaces.

Shape of the World offers the player few avenues for tinkering with the environment except knocking down and planting trees, and the player can only engage in the latter activity by finding seeds in certain places. These have a variety of morphologies, but ultimately, the type of seed the player is carrying is irrelevant since planting a “tree” always generates more of the kind of plant that’s already present. For example, one can’t carry a seed from the coast to plant its trees in the woodland. Except for the odd fact that planting “trees” in the cave creates stalagmites, there’s little interesting about this system.

Taking all of this into account, the only way to feel like there’s any experience to be had is to keep moving forward through the world. To do this, the player needs to find various gateways and monoliths around the map. One passes through the gateways, which sometimes move the player from one region to another and occasionally launch her into the air, but most often cause monoliths to appear. When the player activates monoliths, they usually create walkways through the world. The appearance of these walkways is accompanied by a satisfying ticking sound that always plays well against the music, and moving on them is much more rapid than the sluggish walking speed on the ground. 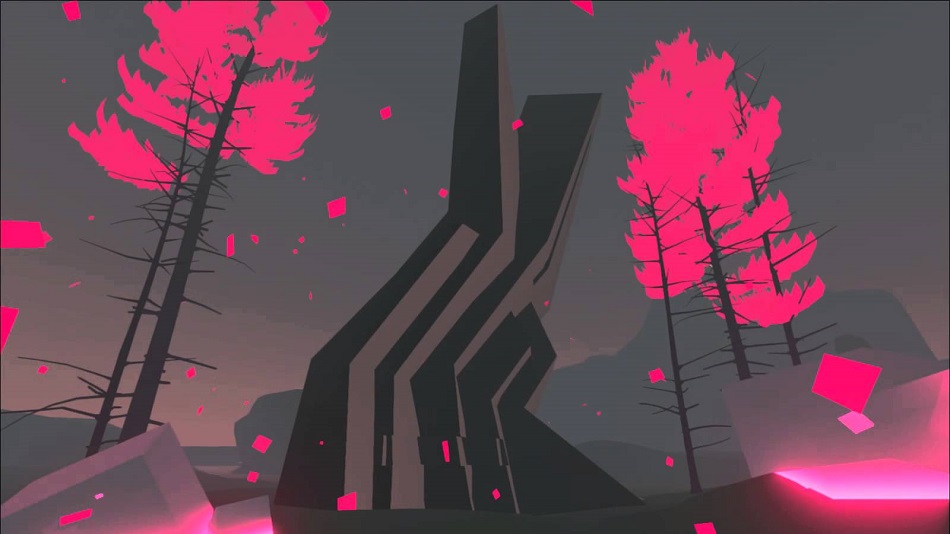 Other times, activating a monolith will fling the player through the air. I almost always like this kind of movement in games, but I found it annoying in Shape of the World. To activate these monuments, one has to put the targeting reticule over them just right, but the reticule is not visible unless it’s already in the right place. It’s impossible to chain jumps using these monoliths, and I regularly had difficulty targeting them when standing still on the ground. This proved a particular annoyance when traversing the game’s mountain, which absolutely depends on these jumps.

The indistinct character of the landscape also makes moving forward more of a chore than it needs to be. In certain areas — particularly the green-gray morass of the caves — I kept getting turned around because it all looked so similar. At these times I had to diligently explore and pick out specific landmarks to figure out what had gone wrong, which made Shape of the World less of an experience and more of a task.

For a supposed chill-out game, Shape of the World just doesn’t hit the right balance. Its dynamics and artwork aren’t interesting enough to justify standing still, and moving forward feels too much like work. Rather than being relaxing, it’s more of a bore. Rating: 6.5 out of 10

Disclosures: This game is developed by Hollow Tree Games and published by Plug-In Digital. It is currently available on PC, PS4, Switch, and XBox One. This copy of the game was obtained via publisher and reviewed on the PS4. Approximately 4 hours of play were devoted to the single-player mode, and the game was completed.  There are no multiplayer modes.

Parents: According to the ESRB, this game is rated E and contains Mild Fantasy Violence. This is an accurate read, there’s nothing here to worry about.

Remappable Controls: No, this game’s controls are not remappable. There is no control diagram. Walk is on left stick and look on right. Jump is on X. A broad “interact” function is on the right trigger and planting trees uses the left trigger.