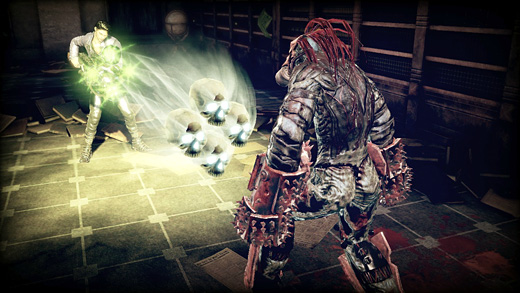 This past season marked an interesting turn in NASCAR racing, by which I mean a right turn. Both the Sprint Cup and Nationwide Tour visited road courses, a rare departure for a racing brand built on ovals. The weight, center of gravity, and wheelbase of a stock car can make even the ovals difficult to drive at racing speeds, so even though the road courses make use of the same basic skills, they pose a unique and difficult challenge, so much so that it was once typical to see "ringers" with road racing expertise make an appearance at the two annual road races. The change-up can result in some uniquely exciting racing, or, as happened this weekend in both races, bruising wrecks. Video games that try to change up their gameplay midstream face similar risks. To understand this, we need look no further than the shmups appearing in Goichi Suda's third-person action games No More Heroes and Shadows of the Damned.

I must begin with a disclaimer that I didn't like Shadows of the Damned very much, and I'm not sure if I'll bother finishing it (this coming from a man who didn't even give up on Flower, Sun, and Rain). The gameplay is standard, if unusually finicky, third-person shooting that borrows a stun mechanic from Alan Wake, the art direction is not particularly interesting, and the humor is something I'm about 20 years too old to appreciate. Throw in irritating, feedback-free QTEs of the sort that would get a game absolutely excoriated if Shinji Mikami's name wasn't on the box and you have a package I just don't like. The QTEs ultimately made me quit, but what pushed me to the edge was the shmup that came before they got bad.

Let me also say: I am not very good at shmups. It's not a genre I generally choose to play, and even when the controls are tight and the weapons are effective, I find them extremely trying. My heart sank when Pure White Giant Glastonbury showed up on the screen in No More Heroes, and I thought for a moment that this would be the point where I would have to give up the game. However, Suda's implementation in this case is actually quite clever.

The primary reason I say this is that you can't lose. No matter how terrible you are at the game, you never run out of credits. This is important because the game isn't real, at least not in the context where you first play it. The game is a dream Travis Touchdown is having while he rides a subway. The fact that it's a dream tells us something about Travis, sets the stage for the reality-bending boss fight that follows, and also rationalizes the impossibility of failure. As such, although it's not a particularly exciting or well-executed shmup, Pure White Giant Glastonbury provides a brief, interesting change-up from the standard gameplay of No More Heroes. 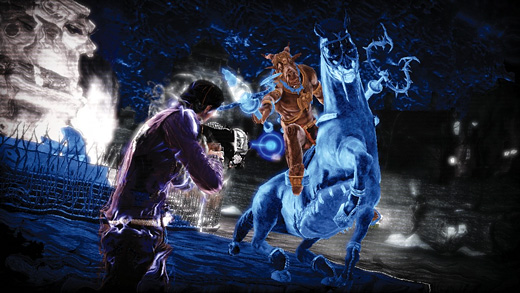 The shmup levels in Shadows of the Damned aren't particularly exciting or well-executed either, but this is about all they have in common with Glastonbury. The game's hero, Garcia Hotspur, starts floating around a world that looks like a paper cut-out, firing his gun at a procession of the game's stock demons until they fall apart. Garcia moves sluggishly and can only fire his peashooter bullets forward, which doesn't really cause problems until the third stage. Unlike Glastonbury, the Shadows shmup appears repeatedly—making its wonky carry-forward of Y-axis reversal particularly surprising—and can be failed.

And fail it I did, at least a few times, in the boss fight at the end of the third stage. The stage itself was exceptionally irritating, with a maze that required backtracking, and thus a fight against Garcia's poor controls. This was followed by a segment that featured enemies jumping up towards Garcia and also attacking from behind, both of which were difficult to handle. Then came the boss fight, a three stage affair which wasn't especially bad except for the unfortunate way in which the healing item spawned. The final stage was low on feedback in comparison to the other major bosses, but the two earlier stages had a good feel for progression. Overall, the shmup segments weren't offensively bad, but they weren't good either. The problem is that they broke with the skills I'd been developing throughout the game to lean on skills I didn't have, so that I would get a few boring levels followed by a disappointing fight to end a boss that had been built up almost throughout the game.

That boss, Justine, appears very early on in Shadows of the Damned and introduces its first boss fight. Her appearances continue throughout, interspersed among a series of other bosses. To have this culminate in a simple, shmup-style bossfight against a giant version of herself in a gas mask is something of a disappointment in a game where a guy eats his horse's heart and turns into a ten-story-tall goat-headed freak.

The larger problem, though, is that the mechanics and aesthetics of these sequences have practically nothing to do with the rest of the game. I've seen the "Big Boner" sequence come in for some criticism because it is poorly designed and embarrassing to listen to, but that is at least a sequence that fits within the design aesthetic of the whole game. The shmup doesn't fit the world, doesn't have anything to do with Garcia, and seemingly has nothing to do with Justine. It's not integrated into the game at all.

No More Heroes and Shadows of the Damned both change up their gameplay by adding lackluster shmup segments, but the thing that fundamentally separates them is that Pure White Giant Glastonbury fits into the world of No More Heroes in a way that the shmup segments of Shadows simply don't. NASCAR's road races are departures from the series' traditional format, but they preserve the aggressive, door-to-door, beatin'-and-bangin' racing that the ovals used to be famous for. Like them, the best change-ups in gameplay preserve the spirit of the game, even if they don't match the mechanics. That Shadows of the Damned fails to do this is part of the reason it's destined to be a lesser entry in the canons of its creators.