The Castle of Death 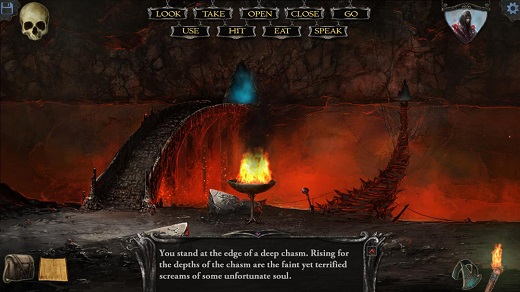 HIGH Figuring out the process of getting across the wooden bridge.

LOW The rather anticlimactic conclusion.

WTF Why is Jair so confident he'll never need any of these keys again?

The original Shadowgate was released for Macintosh computers in 1987 and I do not want to hear that you weren't even born yet.

This first-person adventure game about exploring the titular castle became popular enough to spawn ports and remakes up until the advent of the GameCube. After many years laying fallow, its world has been revived with Shadowgate, a remake that wonderfully preserves the original's atmosphere, and not-so-wonderfully preserves much of the clunkiness of its interface.

Shadowgate shows its retro origins right away with a panel of buttons on the screen labeled with verbs the player can use to interact with the world. Fortunately, Castle Shadowgate and its environs look a lot better than they did back in 1987; hand-painted environments with a few animated touches make this one of the more beautiful titles I've played this year. The story—a basic hero's quest where a young man named Jair takes on an evil wizard—remains the same, although some rather windy voice-acting and perhaps a touch more faux-archaism has been added.

This remake remains a throwback in at least one other aspect: the difficulty. The best way to describe it is to say that Dark Souls is the Shadowgate of RPGs and so Jair is going to die. A lot.

This is actually critical to the game's storytelling because there's never a direct conflict with the villain until the very end. The scale and aggression of Jair's enemy is conveyed, solely and with great effect, by the castle's fatal dangers.

Some deaths are reasonable—for instance, if Jair jumps out a window without any way to climb down, he'll fall to his death. Others seem excessive, such as Jair's tripping and breaking his own neck if he tries to move without the benefit of torchlight. Many, however, are plainly trolling for a game over screen. For instance, goblins roam the castle. If Jair tries to attack them with an actual weapon, he'll be killed. If he punches them, he knocks them out cold.

The only way to get around roadblocks like this is to try literally everything, but Shadowgate inhibits this approach by putting two separate time limits on the player. The first, hard limit is the finite number of torches in the castle. Any movement without a lit torch leads to death, so the total number of actions Jair may take is limited. Additionally, the game afflicts Jair with a curse early in the adventure that will kill him if not cured.

The tension between the need to address these time limits and the need to figure out the castle's obscure mysteries by banging items and verbs together until something works creates an air of menace and threat, albeit one mitigated by the player's ability to save-scum.

The puzzles of Castle Shadowgate can be fiendishly difficult to solve. The game drops hints in many places, but it obscures them so totally that it's possible to pass a challenge thanks to sheer luck before realizing that the solution was on some scroll in Jair's inventory the whole time. Jair also has a talking-skull companion who can offer advice, but he's typically useless. Patience, close and comprehensive observation, and a willingness to try everything will eventually get a player through most of the game's challenges. Trying at a lower difficulty first might not, however, since some puzzles change in significant ways between the different levels.

Unfortunately, a few challenges—a shield that must be used rather than taken and then equipped, for instance—require the player to exploit opportunities he may not understand are there. This points to one of the major irritations with Shadowgate, in that its interface is every bit as retro as its design philosophy.

Hotkeys and programmable macros remove a bit of the pain by cutting out the step of clicking on a panel at the top of the screen every time the player wants to do anything, and a decent quicksave and autosave system makes dying less of an absolute pain than it could be. Still, much of the game involves hunting for the right interactive spot on the screen and laboriously testing spells and inventory items on parts of the environment or each other. Implicit verbs and interaction wheels would have been a useful way to smooth out the gameplay. The failure to offer these affordances or to acknowledge the advances adventure games have made in the nearly 30 years since the original seem like the wrong choice.

Shadowgate doesn't religiously preserve the architecture or the puzzles of the original game, and is better for it. What it does retain is the castle's sense of threat and atmosphere of danger—rare things to find in an adventure game. The ill-advised adherence to archaic modes of interaction does the game no favors, but it's a small price to pay to return to this lovely, deadly place. Rating: 7 out of 10


Disclosures: This game was obtained via publisher and reviewed on a home-built Windows 7 PC equipped with an Intel i7 processor, 8 GB RAM, and a single Radeon R9 270X graphics card. Approximately 8 hours of play was devoted to single-player modes and the game was completed.

Parents: As of press time, this version of Shadowgate has not been rated by the ESRB. Previous versions of the game were rated E, which may be a little forgiving. While there is essentially no explicit gore or graphic violence, there are a lot of text descriptions of the various horrible ways the main character dies (so many times) and several instances where the protagonist can or must kill other creatures. In light of this I would probably peg the game as an E10.

Deaf & Hard of Hearing: Literally everything is presented in text alongside the voice acting and there are no sound cues of any significance. You should have no problem.

I honestly don’t understand why the controls weren’t refined for current players. Adhering too strictly to everything present in an old title just doesn’t make sense – either the developers were too stubborn to change it for the sake of preserving nostalgia, or they just didn’t care.

In spite of that, I am somewhat intrigued. Maybe I’ll give it a shot when I have more time free in my gaming schedule.