Lands with a thud 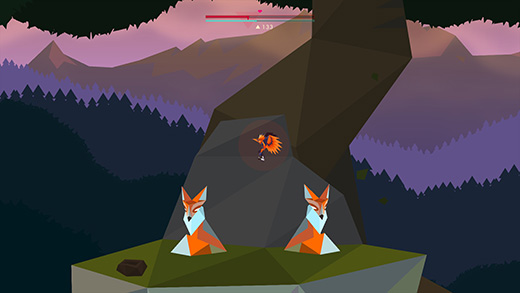 HIGH Riding an air current over the height barrier, then diving deep into a lake.

LOW Trying to get a gold piece past three grabby birds in an area that didn't have any way to hurt them.

WTF Why is there no map?

It's easier for a bird to explore a mountain than it is for a man, which may explain the avian protagonist of Secrets of Raetikon

. The alpine landscape of the game would be too much for a human to challenge, but a winged wanderer can conveniently visit the ruined buildings and shattered statues of the lost civilization that once existed there. If only the mysteries of that place were worth solving. Secrets of Raetikon has an interesting premise and engaging art, but the game itself is just an irritation.

Early in Raetikon the player finds a giant machine that can only be activated using the power of golden triangles spread throughout the world. Exactly what motivates a bird to activate it is never explained, but the object is clear.

In order to obtain the triangles, the player must thoroughly scour the land in order to discover smaller silver triangles to first unlock the temples that hold the gold ones. Along the way, he can also obtain runes to decipher monoliths that dot the countryside and collect other goodies to heal him or grant an extra life.

Any hopes a player harbors of gracefully flying through the sky while exploring this beautiful world must quickly be given up. Raetikon's controls, while simple, never feel elegant. The bird always seems to go somewhere unexpected, flapping its wings produces inconsistent thrust, and when grabbing, it always seems to wrap its talons around the wrong thing. When the world opens up into empty space and the bird can ride wind currents high into the sky, Raetikon develops a feeling of soaring that's wonderful. Too much of its run time, however, is spent dragging objects about and dodging the scenery.

This problem gets to be even more annoying because the bird is always under attack from other aggressive birds, angry leaping cats, bugs, and nettles. The only defense against these aggressors is to flap ineffectually to get away, or to lure them into hurting themselves. This imbalanced combat becomes even worse in areas where multiple enemies are attacking. Raetikon's world constantly threatens the player with death rather than inviting him to explore.

The shape of the world also brings the game down. Although the different areas of Raetikon connect in complicated ways, the world itself is not a network centered on the machine the player is trying to activate, but a ribbon extending away from it. This gets to be quite a drag towards the end because each of the magic triangles must be brought all the way back to the beginning, dodging aggressive animals and larger peaceful ones, all of which want to get their hands on the shiny pieces. The journey back frequently turns into a giant game of keep-away played against a multitude of critters that are all faster and more nimble than the player's bird thanks to the handicapping weight of the prize.

The player's reward for suffering through all of this? The game extends its middle finger at the end, with a conclusion that essentially derides the player for developing any interest in its world.

If there's one salve for these annoyances, it's Raetikon's fantastic art design. Almost everything in the world seems to be built from small polygons, giving a sharp, angular appearance that's almost abstract. As good as the art looks, though, it doesn't communicate the world to the player very effectively. Trees and mountainsides that can be flown through are indistinguishable from ones that cannot, even when they must be passed through in order to finish the game. As such, a great deal of exploration takes the form of bumping stupidly against the edges of the world in hopes that a hidden way forward will reveal itself.

Secrets of Raetikon is not a game of peaceful exploration, graceful maneuvering or tactical combat, but rather one of constant, tooth-grinding irritation. Its striking visuals and occasionally wonderful movement are undercut by a constant stream of misguided design decisions and its insult of an ending. Secrets of Raetikon

is thoroughly unenjoyable to play, and the secret itself is a miserable discovery. Rating: 4 out of 10


Disclosures: This game was obtained via publisher and reviewed on a home-built Windows 7 PC equipped with an Intel i7 processor, 8 GB RAM, and a single Radeon 6800 HD-series graphics card. Approximately 3 hours of play was devoted to single-player modes, and the game was completed.

Parents: As of press time this game has not been rated by the ESRB. Secrets of Raetikon contains fantasy violence and blood. The game cannot be won without violently killing many creatures, and aside from this predators will also kill some non-player animals. Wounded animals "bleed" and a late-game scene involves an animal getting crushed and a lot of blood. I would probably rate the game E10.

Deaf & Hard of Hearing: The game has no dialogue. The sound of enemy creatures is a useful warning as to their presence, but not so important that it will really impact the difficulty. Overall, reasonably accessible.