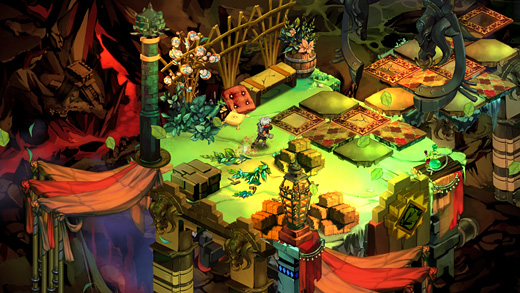 Bastion is a game with marvelous art, a wonderful soundtrack, and solid mechanics, but it was not sold to the public on the strength of these aspects. Rather, it was sold on its storytelling system, in which a narrator responds to what the main character (called only the Kid) is doing. In the game, however, the narrator actually does relatively little of this, and Bastion's plot is thinly realized, offering little insight into its characters and their motivations. Rather, the game's storytelling system primarily delivers background information on the city of Caelondia and the Calamity that has caused the destruction of the city and its environs. Bastion's narrative puts scenario first and story second, in a way that both supports and weakens its central themes.

The compelling scenario paired to a weak plot is a feature of many games, ranging from Shadow of the Colossus to BioShock. These all belong to the class of games where the backstory is significantly more interesting than the story. The story of Rapture's fall in BioShock, for instance, is far more gripping than the relatively pedestrian tale of its protagonist's journey across the undersea city. The compelling scenario, fleshed out by mise-en-scene and audio logs, is a major part of the game's appeal.

In Bastion, the audio logs and codices are replaced by a narrator, Rucks, who talks over the action in most of the game's levels, describing the location as well as the Kid's deeds. Relatively few of these levels are set in Caelondia itself, but Rucks continues to dole out insight into that civilization throughout its length because each of the weapons in the game is identified with a group of professionals. The training areas for these weapons often serve as an introduction to various aspects of Caelondian society, and since new weapons appear throughout, so do new revelations. Moreover, particular demonstrations of mastery with the weapons satisfy "vigils" associated with each group at a memorial site. Completing these vigils inspires Rucks to offer some additional insight into each group.

Notably, these vigils actively characterize the Kid's desire to honor Caelondia's memory. In that sense, they help draw the player in line with a feeling of nostalgia towards the old society. This is important, because one of the ways the player can end the game is to use the Bastion to restore the world to a time before the Calamity. It also matters because Rucks' narration mostly stays out of the Kid's head, even though the most memorable of his soliloquies—the litany of names in the Hanging Garden and the distorted narration in Jawson's Bog—speak to the Kid's emotional and mental state.

Rather than hearing what the Kid thinks, we get an extended rundown on the conflict between the Caelondians and their enemies, the Ura, that sparked off the Calamity. The Caelondians are broadly presented as a Western influence, insistent on imposing their particular view of civilization on all the rest of the world. The name itself, reflecting the Latin "caelum" (heaven) suggests empire and a feeling of superiority, further emphasized by the "skyways" connecting the game's locales. The eastern, naturalistic nature of the Ura is suggested by their sound cues, dress, and weaponry like the naginata, and repeating crossbow. The Japanese うら, meaning "reverse side" or "hidden aspect" encodes their subterranean nature and opposition to the sky-traversing Caelondians. 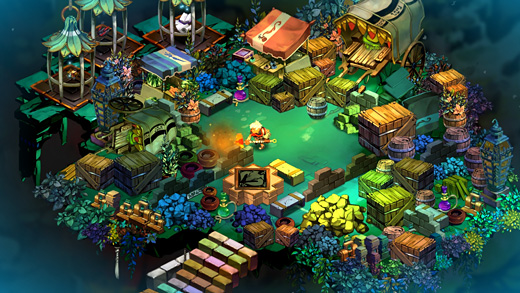 Of course, one could alternatively see "Caelondia" as related to the Latin "caelo", meaning to engrave or carve. This would reflect their nature as clever builders, but also the religious sticking point with the survivor Zulf ,i.e. graven images of the bull-god Pyth. The significance of the contrast between clever builders and naturalistic burrowers matters to the story because the Calamity specifically spared those who were living in Ura dens. It is also intrinsic to the Ura view of themselves, as the singing of another survivor, Zia, reveals:

Despite the air of nostalgia, the game is slanted against Caelondia throughout. Large swaths of Bastion present areas that show the city's failure in its civilizing mission. Rucks' narration hints at a certain social decrepitude, in his comments about the degeneration of religion and citizens who head to an area to "relax from their relaxin'". As the "Who knows where" segments make clear, each of the other named characters has been ill-served by the city. Caelondia let the Kid's mother die and robbed him, gave Zia a life of oppression and pain, and betrayed Zulf's belief in peace. The Calamity, ultimately, was Caelondia's fault: their efforts to seal off the Ura underground forever backfired and killed almost everyone in the city, because Zia's father sabotaged it. Learning this, Zulf decides to renew the cycle of violence and set the remaining Ura against the Bastion.

The Bastion, however, represents an opportunity to take the whole series of mistakes back, a second chance at peace. Certainly Rucks portrays it this way throughout the game. Even if the Kid kills dozens of innocent animals and Ura in the quest to activate the Bastion, it's still all right, according to the narrator, because the Bastion will take it all back. The nostalgia for the city's way of life, as expressed through the gameplay of the Memorial and the compelling narration, pushes this as the desired ending. Yet, it's ultimately revealed that the Bastion can also be used as a means to flee the Calamity, to simply leave the old world behind.

This possibility plays out in a pair of end-game decisions. Having faced the Kid and lost repeatedly, the Ura turn on Zulf. The player soon reaches a point where he can choose to either continue fighting the Ura, or rescue Zulf despite his betrayals. Very shortly afterwards, the player may choose whether to use the Bastion's power to rewind time, or to use it to evacuate. I found these decisions quite jarring and unlike the naturalistic progression of the rest of the game. The existence of these choices is a mismatch to the game's essentially linear nature, and the explicit way they're posed (as giant, selectable blocks of text) is at odds with the game's otherwise subtle presentation.

An additional problem is that the way these choices work with each other is deceptive. Because both of them are merciful actions, saving Zulf seems like it's properly paired to the decision to use the Bastion's main purpose and reset time. However, the latter choice actually belongs with the decision to keep the weapon. If one means to rewind time, the proper thing to do is leave Zulf to his fate and continue killing Ura, because in Bastion rewinding time is not an act of mercy. Doing so merely allows the cycle of violence to continue.

Even in the first playthrough, Rucks expresses some uncertainty as to whether the Calamity can be avoided on a repeat attempt. Subtle changes to his narration in the New Game + mode make it clear that returning to the past has changed nothing. The Caelondians, Ura, and wildlife were not saved by the Bastion—rewinding time only forced them to live through their suffering again. The only way to make a world of peace is to bid farewell to the past, swallow the loss, and carry on.

Turning back time and saving the world doesn't accomplish anything, because nothing is learned, and Bastion means to emphasize the importance of memory. This is true within the game's world: as Rucks explains, the "Cores" and "Shards" that the Kid collects throughout the game gain their power because they "remember things". Young rocks, even of the same kind, aren't of any use. Also, Zulf's and the Kid's attempts to go back to their pasts both fail painfully. Memory features significantly in the gameplay as well. The role-playing metaphor of "experience" strengthening a character is well-applied here, especially in New Game + mode. Additionally the Memorial and "Who knows where" sequences actively characterize the Kid's remembrance. The dominance of Bastion's scenario over its story is therefore a strength, for it too emphasizes memory of the past, rather than renewal.

Where Bastion's narrative falls short is that this thread is too subtle, too far buried in the layers of Rucks' narration to reach the ears of anyone who isn't paying very careful attention. Instead, the game paints the decision to use the Bastion's alternate function as choosing Zia's desires over Rucks', a problematic depiction since Zia never speaks until the end, and the Kid's feelings towards her are undefined. At one point in the game he goes on a long journey to rescue her, but because it's presented in time-lapse rather than as a continuous quest, this active characterization has less impact than it could. As a result, the choice to escape in the Bastion seems to come from pitying Zia's sob story, rather than being a positive decision to use the Calamity as an opportunity to break the cycle of violence.

Bastion could have gotten around this problem by removing its explicit, game-ending choices and instead choosing for the player. As it is, Rucks can't really speak to the theme because the player might not choose the ending that fits it, and the true import of the game-ending choices is awkwardly hidden behind a piteous appeal from a supporting character. Bastion's gameplay, narration, and world all emphasize the importance of learning from the past and moving forward. In creating a powerful impression of a ruined place, however, Bastion distracts the player from this theme. To fit the theme, Bastion's scenario must be more powerful than its story, but ultimately that scenario was too compelling, and undercut the very ideas it was meant to support.

I read your excellent review with great interest. My feelings are Rucks is supposed to sound biased; it’s usually the basis of misunderstanding, suspicion and fear of most other cultures that instill misgivings that lead to such calamity. Rucks felt like another generation, one to move forward from. My second play through seemed to be critical to my ultimate enjoyment of the game. I felt I really “got it” the second time through and would highly suggest doing this. I paid more attention to the story, my feelings and responses and could enjoy less button mashing and more stylist use… Read more »