Johnny Get Your Gat 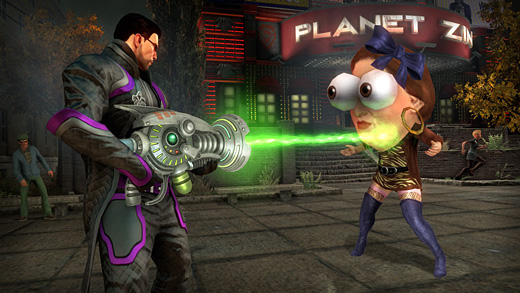 HIGH "Asha, that lightbulb has a family."

LOW The disappointing "sidequests" are just groups of area-control events you would probably do yourself anyway.

WTF How do you get a simple concept like TK mayhem so wrong?

kicks off with a bang. In the first few minutes, the leader of the Third Street Saints—who may be male, female, black, Asian, Hispanic, fat, thin, or a voluptuous woman with the voice of Nolan North—rides a nuclear missile, punches a snide Congressman in the d*ck, and shoots down UFOs using a turret on the White House lawn. I wondered, as the Boss jump-kicked her way into the cockpit of an alien battleship, how the game could top all this stuff.

The answer is: it doesn't.

That may seem a strange thing to say in light of the changes made to the core gameplay. While previous entries in the series aped Grand Theft Auto, Saints Row IV is more of a riff on Crackdown. The Boss, trapped in a virtual simulation of Saints Row the Third's (SR3) Steelport, quickly gains superpowers that allow her to jump hundreds of feet in the air, run at blazing speeds, pick up cars with her mind, and launch fireballs or ice blasts in all directions. While the system for swapping between all these powers isn't quite as nimble as I would like, they can still be used in combination for some fantastically chaotic moments.

Similarly, the sci-fi setting allows Volition to insert some inventive weaponry. The array of upgradeable laser guns isn't anything remarkable, but the more bizarre parts of the arsenal like the inflato-ray and the dubstep gun (fires explosive wubs!) are both effective and amusing. With all of this, and mech suits and flyable UFOs, the way should be paved for some entertaining mayhem, but the open world never really delivered that for me.

Unlike Brad, I feel that SRIV doesn't create the right context for its powers—rather, the fact that the powers and weapons are completely inappropriate for the setting is the game's primary mechanical joke. Crackdown's Pacific City was designed to showcase its protagonist's special abilities, but Steelport is almost exactly the same city we saw in SR3—one way in which this game shows its roots as an expansion to its predecessor. Some sci-fi installations have been added, and the city has been cloaked in an oppressive, permanent red-neon lit night, but everything was too familiar to give me any real joy in exploration, and none of it is particularly well-tuned to the new abilities. Although it holds over a thousand "clusters" that can be collected to buy upgrades, Steelport never tested my understanding of the powers or the environment the way that Pacific City could. 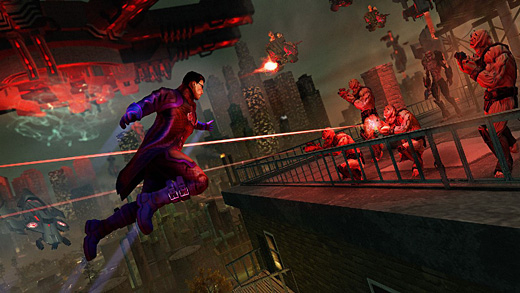 On the ground, the action is a little thin. Many activities that resided in the phone in SR3 have been simplified and transformed into events that grant the player control of part of the city, which has its good sides but cuts down the available open-world play structure. Once the city was taken, I had little to do but gather collectibles and grab a few remaining gold medals from activities.

Unfortunately, the gold medals left were all in missions that didn't really interest me. Most of the activities in SRIV are built around the superpowers, and while they're mostly well-designed they're missing some of the series's spirit. SRIV's auto-running and platforming challenges are fine for what they are, but where's the gleeful mayhem of spraying real-estate with septic fluid, or lighting city blocks on fire with a flaming ATV?

The telekinesis mayhem event seems like the best case in point. I expected to be handed an uncapped TK power and allowed to fling cars, people, and other bits of the landscape in every direction. Instead, the activity only permitted me to pick up and fling heavy balls, and because of the wonky physics, it's actually more effective to swing the ball around without throwing it. A showcase for telekinetic power where you never really use your telekinetic power!

It's no help that the antagonists disappoint. Gone are the themed gangs and dual notoriety system of previous series entries, replaced by thick-necked aliens that look like refugees from the Epic Games recycling bin. The Zin are visual and tactical bores, and never provide any fruitful dialogue. I didn't find their leader Zinyak coherent or humorous, and like Brad, I felt most of the late missions in his plotline were excruciating to play.

It's telling that what I liked most about the game were the missions to rescue or gain the loyalty of members of the Saints—almost all of which removed the superpowers. This involves a tour of past locales and plots from the series, rehashing events from the previous three games, but more importantly it involves drawing in other kinds of gameplay. In the same vein, the jokes SRIV makes about other games, particularly its cracks on Mass Effect 2 and the tactical stealth genre, are infinitely funnier than the jokes it's trying to make about The Matrix.

is a strange beast. Its linear missions are more interesting than its open world. Its review of past characters and places is more engaging than its own plot or setting. Almost every activity and event is entertaining, but I felt no pull, as I did with SR3, to dive back in immediately and do it all again. It's all good, but Saints Row IV lacks the edge of maniacal glee that defines the series. The Boss can freeze dozens of people into ice statues and leap tall buildings in a single bound, but there's never a septic truck around when she needs one. Rating: 7.0 out of 10.


Disclosures: This game was obtained via publisher and reviewed on the Xbox 360. Approximately 30 hours of play was devoted to single-player modes (completed once) and zero hours of play in multiplayer modes.

Parents: According to the ESRB, this game contains blood, intense violence, partial nudity, sexual content, strong language, and use of drugs. This should be obvious, but this game is not for kids. Not even if they ask really nicely or whine a lot.

Deaf & Hard of Hearing: All important dialogue is subtitled and there are no sound cues that aren't accompanied by visual indicators as well. One activity (TK rift) requires the player to quickly distinguish between red and yellow objects, which may prove difficult for red-green colorblind individuals.