Fourth and F It 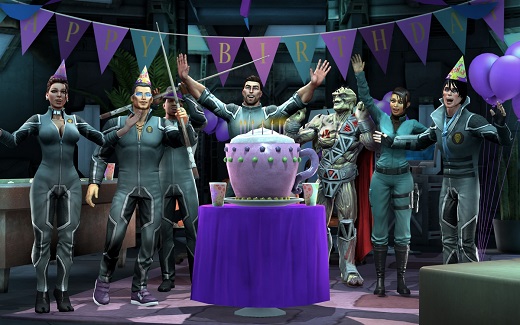 LOW Holding down the power button on my PS4 for ten seconds and hoping the crash hadn't screwed up the hard drive permanently.

WTF There are a lot of different Shaundis in this game…

Fun fact: this is the fourth review of Saints Row IV we've had on this website. Brad and Darren found this game a refreshing return to form after the Third, a game they did not love. I, meanwhile, thought IV was missing some of the edge that had defined the series.

The budding console generation is thick with remasters and HD updates, however, so it's come back around again. Unfortunately, the "Re-Elected" edition for PS4 and XB One is only worth plunging into for those who literally cannot play Saints Row IV any other way.

The reskinning of Zin as gingerbread men and murderous nutcrackers was the best thing about "How the Saints Save Christmas", despite being a meatier offering. A version of Shaundi pops in from the future (for those keeping track, this is the third Shaundi in the game) sending the Saints on a mission to save Santa Claus from an evil version of himself named Clawz. Again, the missions tend towards shooting a whole bunch of dudes, though there is an entertaining bit where the Boss mounts a sleigh and fires flaming coal at the houses of the naughty. The story, however, is disappointingly straightforward, and while it's shot through with plenty of Christmas movie references I didn't find these entertaining. The expansion does add some activities to the map to improve longevity, but these weren't a huge draw for me.

I can't speak to the stability on XBox One, but on PS4 this game was a nightmare. I experienced several crashes while playing, as well as numerous glitches in menus. On two occasions Re-Elected froze up so completely the only thing I could do was a hard shutdown of the console. The sound was glitchy and bizarrely processed, especially in audio logs which sometimes boomed with echoes and were muffled at other times.

The visual upgrade has little to recommend it. The cityscape looks passable, though it was never really attractive in the first place. The character models paradoxically look worse in this remaster. Perhaps it's just the extra pixels, but many of them look like nightmarish rubber dolls in this version.

For someone who has just entered console gaming with a PS4 or XBox One, or who traded in their previous consoles to get their current one, Saints Row IV: Re-Elected is worth grabbing because it grants access to an open-world crime game that's willing to go way out there in every way possible, and make fun of everything—including itself. This is a case, however, where I would whole-heartedly recommend the PS3 and Xbox 360 originals. The remaster's packed-in expansions add little, and the "upgrade" is a failure. Rating: 4 out of 10


Disclosures: This game was obtained via publisher and reviewed on the PS4. Approximately 20 hours of play was devoted to single-player modes and the game was completed.

Deaf & Hard of Hearing: All important dialogue has subtitles and there are no essential sound cues.