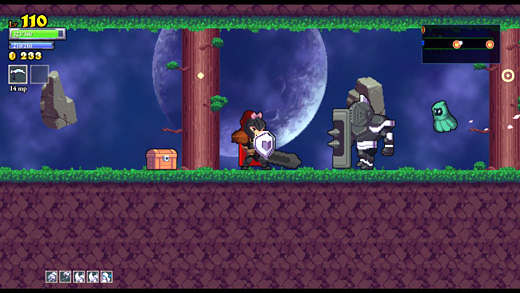 HIGH Finally beating Herodotus after dodging the slimes for what felt like hours.

LOW Setting up a perfect set of runes and equipment and then forgetting to talk to the architect before entering the castle.

WTF My hero had IBS, so I ended up farting in the final boss's face right before he died.

is a game about obsession. It's about one man's obsession to overcome the dangers of an evil castle for his family's sake. It's about a family's multi-generational obsession to conquer that same citadel. Most importantly, it fosters this same obsession in its players.

Rogue Legacy offers a simple set of mechanics. Traversing Castle Hamson is just a matter of light platforming, all characters have the same sword strike, and the library of spells and special abilities is fairly small. The controls are solid except for a dubious pogo attack that's overused to make large jumps, and the basics are easy to master—it's the castle itself that makes things complicated. Its rooms are full of spikes, traps, and dozens of angry monsters out for blood. Healing is limited, and after a certain amount of attrition, the player is almost certain to die.

…But dying? Surprisingly, it's not so bad.

Rogue Legacy doesn't have an experience system, so characters don't get better while they're in the castle. Moreover, they can never leave. To get a stronger avatar, the player has to let the one he's using die. Then, that character's cash can be used to improve the family manor for stat boosts and other upgrades, or to purchase new equipment and runes. The catch? Gaining access to these latter items also requires the player to die.

So if all this dying is happening, how does the game go on? The player chooses a descendant to carry on the family legacy. After the previous character expires, Rogue Legacy offers the player three choices (expandable to six with an upgrade), each with a random class, spell, and set of traits.

The balanced set of classes includes traditional choices like a shield-wielding paladin and glass-cannon archmage as well as quirkier options like the spelunker, who earns extra gold. Most of the spells are just ranged attacks, like the ability to throw a dagger or chakram, though one may also get tactical magic like a teleport or the incredibly useful time-stop. Traits cover a vast range of possibilities. Many are cosmetic—"gay," for instance, just changes the gender of some statues in the castle. Others can be unexpectedly helpful (arterial disease prevents traps from springing) or devastatingly difficult to deal with (vertigo turns the screen upside down). 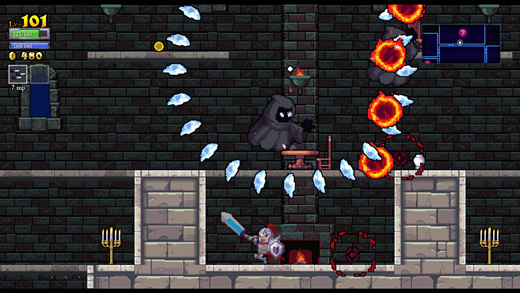 Only after a descendant is chosen can the player start upgrading his manor and gear, and this is a key component of how the game draws him along into another try at Castle Hamson.

Because death in Rogue Legacy usually comes as a process of attrition rather than the character being totally destroyed in a single moment, it always seems like the ability to overcome more of the castle is within reach; with just one or two of the right upgrades, one could get to the next boss and beat him. Death is the moment of opportunity to improve, and so the player has good reason to immediately select a new character, upgrade, and head off into the castle again.

Rogue Legacy avoids becoming stale by changing the castle's layout for each generation. Although the overall design—tower above, gardens to the right, dungeon below—always stays the same, the particular rooms and their connections get completely rearranged each time. The only thing preserved is the bosses that have been defeated. Over time the player will come to recognize specific rooms, but the library of possibilities is large enough that each generation is a unique experience, although the castle's structure can be frozen for a hefty price.

As good as Rogue Legacy is, it has some flaws. Getting into the castle costs each character nearly all of his money, making it impossible to save across multiple generations.  This steep entry fee feels unnecessarily punitive and, especially as the cost of upgrades increases, leads to some unproductive grinding runs. Even early on, the inability to save up money across runs may trap weaker players in several wasted generations. Ultimately this just feels like a cheap way of making the game more difficult without making it any more interesting.

The equipment system also feels a little weak. In order to buy new gear the player must retrieve blueprints from within the castle and then pay to actually gain access to the weapons and armor. Despite playing for quite a long time, I only found about half of the blueprints. As a consequence, the equipment system ceased to affect my game. It doesn't help that the upgrades are visually boring, and that most of them have only modest effects. The runes, due to their more powerful effects and the challenges that have to be overcome in order to earn them, feel more interesting and more of a piece with the ideas of the game.

Despite these minor blemishes, Rogue Legacy

is an engaging game that holds up over numerous trips through its diabolical castle. Though its story and mechanics are simple, they form a too-rare synergy—the design engenders in its player the same obsession that the characters experience. Neither he nor they can let Castle Hamson go. Rating: 8.5 out of 10.


Disclosures: This game was obtained via retail purchase and reviewed on a home-built PC containing an Intel i7 processor, 8 GB RAM, and a single Radeon 6800 HD-series graphics card. Approximately 30 hours of play was devoted to single-player modes and the game was completed.

Parents: As of press time, this game has not been rated by the ESRB. Rogue Legacy contains violence, but no real blood or gore. There is no sexual content (unless you count the word "gay" in and of itself) or explicit language. While younger children may find the game to be too difficult or frustrating, I believe it is likely to be appropriate for anyone over the age of six or so.

Deaf & Hard of Hearing: None of the game's dialogue is voiced, but off-screen enemies and traps make noises that are often helpful in avoiding a messy death. Most relevant color differences are accompanied by changes in shape or size, but colorblind individuals may occasionally get surprised by enemy attacks.

Rogue Legacy does have some feeling of progression – at least a bit more than FTL or Spelunky – because the family manor persists between runs, as does the boss state. You don’t activate waypoints within the castle or anything, though, so I think you’d find it a bit too repetitive. I enjoy Soulslikes myself, but I think that indies will be slow to build in that subgenre. One of the major attractions of Roguelikes for small teams is that a practically infinite game can be built from a relatively small set of materials. Soulslikes need a completely defined world,… Read more »

It pains me that I just don’t get on with Roguelikes, given that so much that is interesting about the games scene is focused on them at the moment and is generating great games like FTL, Spelunky, Tokyo Jungle etc. I just can’t deal with the repetition, lack of checkpointing, and the starting all over again. I think I need a sense of progression to enjoy a game, and not to feel like I’m just wasting my time. I like reading about them, but personally I’m waiting for the next genre wave to come along – the one that is… Read more »