HIGH The first fight where I really figured out the battle system.

LOW The difficulty spike in the final chapter.

A number of my friends wondered why Sega chose to release Resonance of Fate so close to Final Fantasy XIII. At the time it seemed plausible that they were being ballsy, or even overconfident, firm in their belief that a new property could take on the Japanese role-playing game (JRPG) juggernaut. Having played it, two other possibilities suggest themselves to me. Sega might have released Resonance of Fate when they did with the hope that the fact that one of the characters of this game perpetrated a school shooting might get buried in the avalanche of publicity for Final Fantasy XIII. Alternatively, they may have just hoped to bury the game itself. Although it departs from convention in some admirable ways, Resonance of Fate collapses due to its unlikable characters, drabness, and grind.

Unusually for a JRPG, the combat in Resonance of Fate focuses almost exclusively on gunplay, and relies heavily on positioning and line-of-sight. Although players can perform attacks in the traditional sense, most of the time a player will instead use "hero actions" to run and jump their way across the area John Woo-style so they can blow their enemies away in a hail of bullets. The game doesn't offer much in the way of weapons: only a few pistols and submachine guns (SMG) are available, although there's a substantial variety of grenades. The SMG has the most damage-dealing potential, but this damage must be actualized using less-powerful weapons like the pistols. Therefore, most enemies can only be defeated if they are attacked twice—once by the SMG to set up damage, and once by a handgun to make the damage real.

The resulting combat system is visually exciting and tactically deep, but the game as a whole doesn't respect these qualities. Resonance of Fate's combat arenas are drably colored and extremely repetitive, both in their layouts and in the enemies that inhabit them, muting the excellent action. The involved, strategic nature of the gunfights means that even combat against low-level foes can take a lot of time. Ideally, the game would be tuned for this by lowering the encounter rate and raising the stakes (and benefits) of each individual battle, but Resonance of Fate instead clings to convention, throwing mobs of old enemies at you long after they have ceased to pose any interesting tactical problems. With nothing worth looking at and little worth thinking about, the fascinating battle system is drained of all pleasure and interest long before the game staggers to its conclusion. 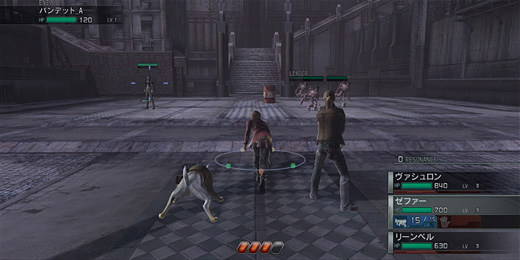 The game's descent into boredom and frustration is exacerbated by a dull, meandering story about a trio of characters I had no interest in knowing. The main female character, Leanne, is a stock entry from the patriarchal playbook, always sounding like she's on the verge of tears and insultingly dependent on the men despite her battle prowess. One of those men, Vashyron, offers insipid advice and posturing, except when he is driven into a rapturous daydream by the sight of a client's outsize, pendulous breasts. The other man, Zephyr, is the aforementioned school shooter. Oh, he's appropriately broken up about the fact that he murdered dozens of his classmates when a cut-scene demands it, but that's hardly convincing when he regularly describes his victories as "Like crushing a bug: squish!" Everything Zephyr says in battle paints him as stupid, cocky and bloodthirsty, not remorseful and tortured by his sins. These aren't the sort of people I'd spend 10 minutes with for free, much less hang around for 40+ hours at a cost of 60 bucks.

The trio hire themselves out to perform various services in the enormous clockwork tower everybody is living in. When the gears and catchments are in evidence, this setting is spectacular, but most of the game plays out on an essentially featureless overworld map and in static, boxy little battle arenas. The game's overarching plot concerns a powerful religious leader's efforts to reconcile his faith with his knowledge that the real god of the tower is a machine. That could be an interesting story if I had actually been involved in it, or if it had anything to do with the tasks I was assigned in the various chapters of the game. Unfortunately, the man at the center of the plot only interacts with the party three times, and the chapters are absorbed with various "slice of life" vignettes that usually don't advance any story or develop the characters.

Perhaps the various chapter stories would have been interesting if I had found the characters more tolerable. Perhaps I could have enjoyed the main plot if it had involved my actions or resulted in any kind of closure. Perhaps I would have loved the battle system had it been used more for meaning and less for grind. Unfortunately, Resonance of Fate gets almost everything wrong and even screws up what it got right. Rating: 3.5 out of 10.

Disclosures: This game was obtained via retail store and reviewed on the PS3. Approximately 45 hours of play was devoted to single-player modes (completed 1 time).

Parents: According to the ESRB, this game contains blood, mild language, sexual themes, use of alcohol and violence. I felt the game's depiction of female characters was sexist and insulting; parents may also be troubled by the fact that one of the main characters perpetrated a school shooting.

Deaf & Hard of Hearing: Subtitles are spotty at best and do not encompass plot-related battle utterances. There are no essential sound cues, but there are very useful sounds that are adjuncts to visual indicators.

it has ‘took so long working out the battle engine, the deadline hit before the story and world layout was finished’ written all over it, doesn’t it?

Too bad, really. I loved Valkyrie Profile 2.. that game was so tightly put together. What happened, Tri-Ace? 🙁

The voices started off pretty well, I thought, but late in the game when everyone’s trying to emote a bit more the quality declines, as is typical. The supporting cast in particular gets a bit howly, but really, the script doesn’t give them much to work with. Nolan North’s performance of Vashyron was excellent, and frankly the only thing that made that character even marginally tolerable. Scott Menville did a pretty solid literal reading of Zephyr, though in a way it felt like he was just recycling his work as Robin. I think he could have done some things (with… Read more »

It’s nice to see that my impressions were generally correct. I could feel my enjoyment of the game dropping ever downward once I figured out the battle system.

It’s a shame too. I think the game deserves attention for its truly superb voice work (even if the characters talking aren’t all that great) and its ambitious attempt to merge JRPG and turn-based strategy with a result that isn’t yet another SRPG.

It’s unfortunate that the gun customization the game does have is so ludicrous. It wasn’t very long before I had an SMG equipped with five barrels, some of them pointing off at right angles from the rest. I’m not sure I want to imagine the sort of creature that could actually benefit from the use of all five scopes I attached to that gun, either. What I think I would have preferred for customization would be a wider array of weapons. Enemies in the game use assault rifles, shotguns, sniper rifles, and rocket launchers; seeing some of that variety in… Read more »

I set the voices on Japanese and didn’t experience such a dislike for the characters, and just viewed the game as a weird catholic/steampunk dungeon crawler w/guns.

Now, if they had put as much customization options into the guns as they did their clothes, I think this would’ve been a MUCH better title. I lost interest about 12 hours in, after trying the same battle about 12 times… asked myself why I was still playing, couldn’t think of a good enough answer.

I loved the music that played when you were in town.

If you’re a completist, maybe.. I never played the first one and I really enjoyed 2.. it’s a REALLY beautiful game, deep combat engine, and very unforgiving if you try to plow ahead. 😉

[quote=Anonymous]it has ‘took so long working out the battle engine, the deadline hit before the story and world layout was finished’ written all over it, doesn’t it?

Too bad, really. I loved Valkyrie Profile 2.. that game was so tightly put together. What happened, Tri-Ace? 🙁 [/quote]

I really want to play this game. Does it matter if i have not played the 1st one? I only have it on PSP.